China struggled to keep up the pressure and would have gone scoreless in the second half without a sudden strike by Brazil-born Elkeson, who in August became the first player without Chinese heritage to be named in the national squad.

At the Tianhe Sports Center in Guangzhou, southern Guangdong Province, Yang found his first in the sixth minute off a cross from Wang Gang but Guam looked like leveling soon after with some gaping holes in the hosts' defense.

Winger Wu Lei's feint around Travis Nicklaw into goal from the penalty line checked the brief burst of momentum from the visitors and Yang's second moments later kept the hosts on the front foot for the rest of the half.

Yang scored his fourth in the 31st and shook off a tumble soon after that saw a yellow card for Nicklaw, while Yu Xi's header brought China to six.

With the other scorers benched after the break, Yang's best shot at a fifth was flagged offside.

Elkeson, or Ai Kesen as he is called in Chinese, stepped up in the 75th but missed his chance at matching the double he made on debut against the Maldives last month in the final shortly before the whistle.

With the victory, China moved top of Group A with two wins. Eight first-placed teams from each group and the best four second-ranking teams qualify for the next round, in which 12 teams will compete for spots at the 2022 World Cup in Qatar.

"Although our opponents are not strong, our players played a good game. We had some good combinations and got three points. Our target is to qualify for the last 12 stage," China coach Marcello Lippi after the match. "The players were very focused, that's good. But they can improve their touch in some cases."

China next plays the Philippines away on October 15. Syria, which defeated the Philippines 5-2 as the away team in their first game, is the main rival for China in the group. The Syrians were playing the Maldives later. 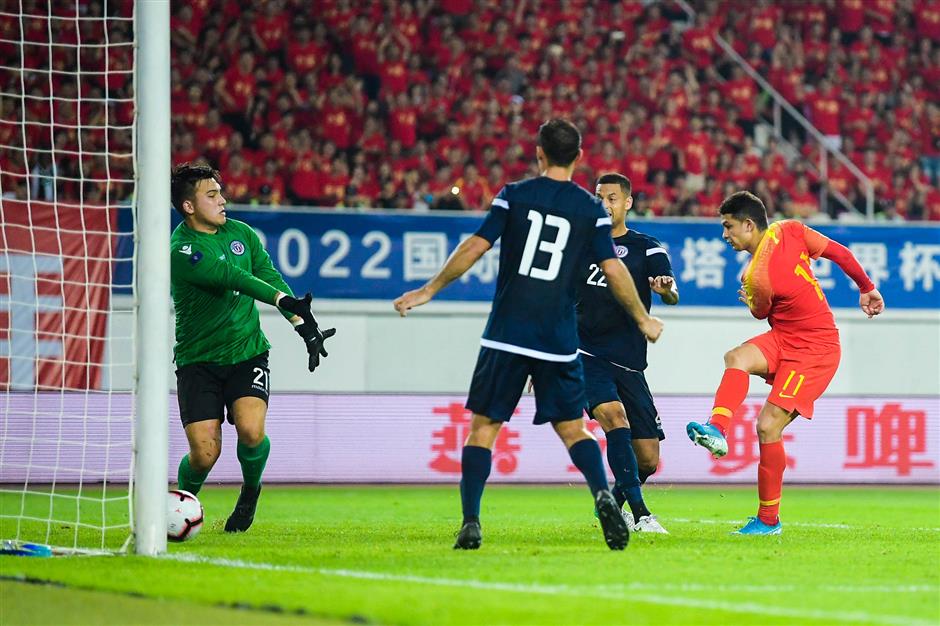 In Canberra, Jamie Maclaren scored a hat-trick in Australia's 5-0 thrashing of Nepal earlier.

The Socceroos missed several opportunities against their 161st-ranked visitors but maintained a tight defense and dominated possession through the match.

Their opponents were flagging by half-time, with a dogged showing by goalkeeper Kiran Chemjong avoiding a bigger blowout.

"We created a lot of chances, but we got a bit more ruthless when it counts," said Australia coach Graham Arnold after his side's biggest home win in three years. "Overall, I'm very happy."

Melbourne City's Maclaren opened scoring in the 6th when Chemjong lost his grip on a drive from the top of the box.

He doubled the lead in the 18th with a header off Rhyan Grant.

International debutant Harry Souttar followed five minutes later with his own nod into goal, but a potential fourth by Mathew Leckie seconds before the break was controversially ruled offside.

By then the Aussies had made 16 shots on goal against a solitary attempt by the visitors — a 44th-minute Hail Mary from Abhishek Rijal from near the half-way line.

The visitors rallied in the second half but notched an own goal after failing to deflect Souttar in the 59th.

Late substitutes Ajdin Hrustic and Awer Mabil kept up the pressure but could not capitalize on their attempts before Maclaren scored his third in the closing moments.