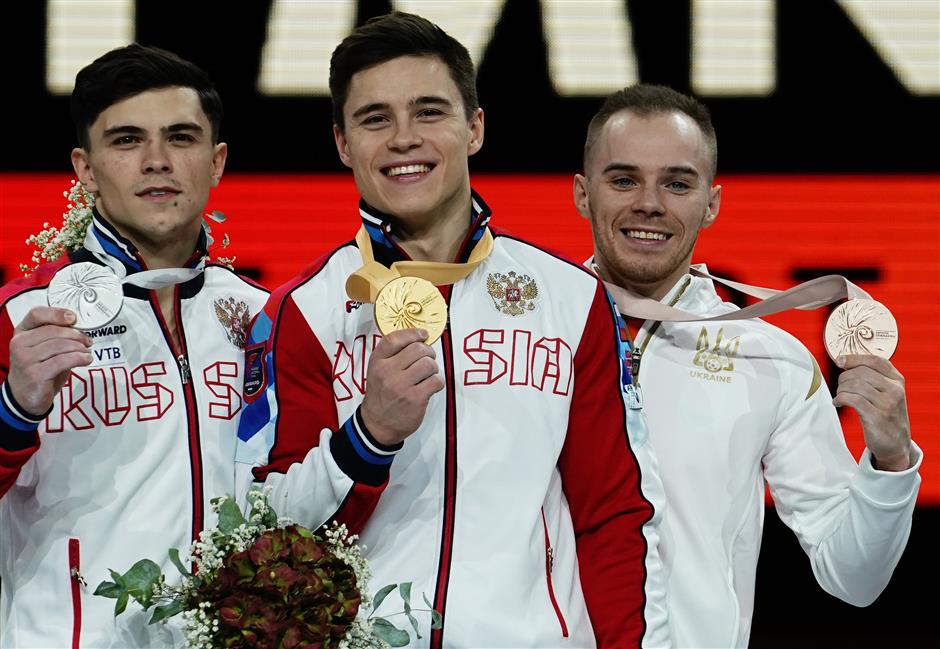 Russia's Artur Dalaloyan, Russia's Nikita Nagornyy and Ukraine's Oleg Verniaiev pose with their medals on the podium after the men‘s all-around final at the FIG Artistic Gymnastics World Championships at the Hanns-Martin-Schleyer-Halle in Stuttgart, southern Germany, on October 11, 2019.

The 2019 European champion Nikita Nagornyy clinched the men's all-round gold at the 2019 Artistic Gymnastics World Championships in Stuttgart on Friday.

Chinese front runner Xiao Ruoteng, the 2017 champion, narrowly missed a medal at 86.690 after a fall in his final rotation at the horizontal bar. Chinese Sun Wei crossed the line as fifths with 86.523.

The 2018 silver medallist Xiao was in a position to challenge Nagornyy for the podium's top step most of the competition, but in the final rotation, he caught a release move on the high bar too close and had to hop off the bar.

"I showed quite a high standard in my first five rotations. Going to high-bar, I wanted to close the gap of 0.5 points," the Chinese told Xinhua.

"I'd decided beforehand that if I were trailing, I would add difficulty to challenge the leader."

He admitted he wasn't satisfied with the previous World's outcome. Not to again end up as runner-up made him take more risk this time and add flying moves.

The Chinese intends to increase his efforts in rings training. "I had injuries on my shoulder, and I still have the potential to improve on the rings. I was much better on pommel horse, but the lead was erased after the rings."

Asked which of his opponents is closest to his level, Xiao said: "To be honest, I'm the closest to Nagornyy in terms of level. My other rivals are also strong, but not as good as him. His execution is great, he's very stable."

The Russian all-round winner had been the best performer in 2019, now underlining his leading position in Stuttgart. In a previous competition, Nagornyy had secured team gold for his country as its team's final competing gymnast.

Xiao called the Russian the strongest competitor when it comes to the Tokyo Olympics.

"Tired," the 22-year-old Nagornyy said. "I felt emotionally spent after the team final, and so the all-round final was not as cheerful. Overall, though, I liked the crowd and how everything went."