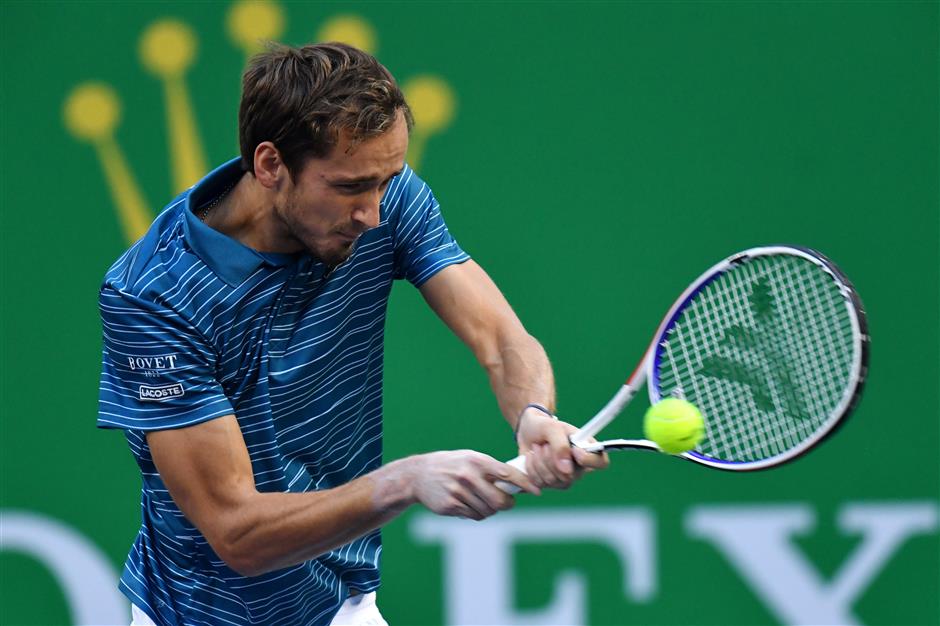 Daniil Medvedev of Russia hits a return against Stefanos Tsitsipas of Greece during their men's singles semifinal match at the Shanghai Masters tennis tournament in Shanghai on October 12.

Dominant Daniil Medvedev reached a staggering sixth final in a row and will play Alexander Zverev for the Shanghai Masters title on Sunday.

In the other semi-final on Saturday, Germany's Zverev eased past Matteo Berrettini of Italy 6-3, 6-4 in a showdown between two more budding talent.

With Roger Federer and world number one Novak Djokovic ousted in the quarter-finals, the next generation of men's tennis stars has made its mark in China.

The 23-year-old Russian Medvedev embellished his fast-growing reputation with a fifth victory in as many matches against Tsitsipas, 21.

In contrast, he is yet to overcome the 22-year-old Zverev in four attempts.

"I did say before this year and during this year in the beginning that Sascha (Zverev) was the best in our 'Next Gen' group," the world number four said.

"He won three Masters when none of us were even close to doing this.

"Positions have changed a little bit so I think I can contest him right now."

The seventh-ranked Tsitsipas, who dumped out defending champion Djokovic in three sets on Friday, said that Medvedev's formidable serve had been the difference.

"Same vibes, same thing all over again," said Tsitsipas of yet another defeat to the Russian.

"I don't mean to be rude at all, but it's just boring.

"It's so boring that I hate myself for putting myself into that kind of situation where I have to play in his own terms and not in my terms."

Sixth-ranked Zverev, long touted as the man most likely to join the "Big Three" of Federer, Djokovic and Rafael Nadal, has had a disappointing year, winning only one title.

But the German defeated 20-time Grand Slam champion Federer on Friday and took that momentum into his last-four clash with the 23-year-old Berrettini.

The Italian, 13th in the world, put up a better fight in the second set but was broken in the ninth game as his hopes of an upset faded.

Nadal is not in Shanghai because of a wrist injury.