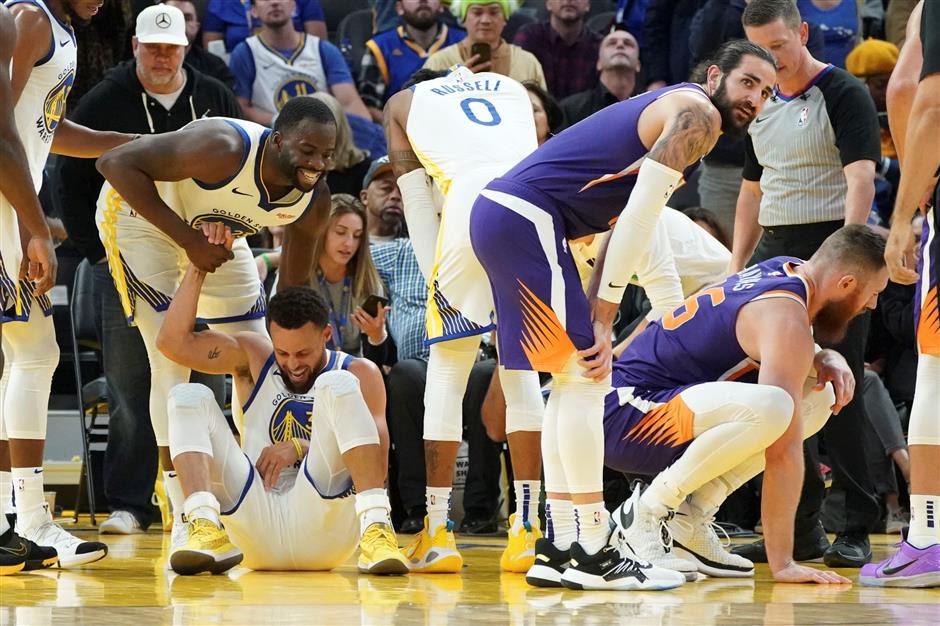 Golden State Warriors forward Draymond Green helps up guard Stephen Curry after the latter suffers an injury during the third quarter of their NBA game against the Phoenix Suns at Chase Center in San Francisco on Wednesday. The Warriors lost 110-121.

In what has already been a rough start to the season for the Warriors, now Stephen Curry is down. A two-time MVP, he is Golden State's longest-tenured player and its oldest at age 31 — the heart and soul of his National Basketball Association team.

Curry broke his left hand and became the latest injured Warriors player when he fell hard in the third quarter of another embarrassing defeat by Golden State, 110-121 to the Phoenix Suns in San Francisco on Wednesday night. A CT scan will determine whether Curry needs surgery, the Warriors said.

"I just feel bad for him," Suns coach Monty Williams said. "When these guys who are the faces of the league go down it's not good for the league, but especially someone like Steph, who's done so much to raise the level of excitement here in the Bay Area and throughout the league."

Curry drove to his left defended by Kelly Oubre Jr and with big man Aron Baynes standing solidly in the paint. Curry leapt with the ball then came down head first landing awkwardly on his hands to brace himself from the court, with Baynes crashing onto Curry's left hand. Curry grimaced in pain grabbing at his fingers then walked to the locker room with 8:31 left in the third quarter.

"Aron Baynes came up after the game and just wanted to know how Steph was doing," coach Steve Kerr said. "You could tell he felt really bad. It's just a random basketball play, so stuff happens."

Baynes had 24 points, 12 rebounds, 7 assists and 3 blocked shots, Devin Booker scored 31 points as the Suns jumped out to a huge lead they never relinquished. The Warriors have lost badly in their first two home games at sparkling new Chase Center.

The ailing, undermanned Warriors welcomed back two players but still fell behind 11-39, shooting 4 for 17 as the Suns made 14 of their first 23 shots and 8 of 12 3-pointers.

Curry had 9 points on 3-for-11 shooting before getting hurt.

Losing Curry for an extended period would be a huge blow for a young Warriors team.

"Of course it hurts knowing that Steph Curry's down," said rookie Eric Paschall, who made his first career start and scored a team-high 20 points. "... That's a very, very valuable piece of our team but I feel like we're going to stay positive."

Golden State is struggling to start the season with Kevin Durant's departure to Brooklyn and Klay Thompson out for perhaps the entire season recovering from July 2 surgery to repair a torn ACL in his left knee.

This was another rough one after an embarrassing season-opener in the first game at Chase Center, a 122-141 loss to the Clippers last Thursday that saw some fans leaving after the third quarter.

Golden State returned home with a 1-2 record and amid a stretch with five games over seven days and two back-to-backs.

The Warriors trailed 46-72 at halftime on Wednesday after falling behind 37-70 at the break in Oklahoma City on Sunday.

Golden State center Willie Cauley-Stein, who missed all of training camp with a sprain in his left foot, had 12 points and 5 rebounds in his Golden State debut. He checked in for the first time at the 8:23 mark of the first quarter.

A mix of superstars, coaching, supporting cast and championship experience had made the Warriors the strong preseason favorites for the past several seasons.

The loss of Curry for a possible extended period now leaves the Warriors as a shadow of their recent championship teams.

Their bid for a third straight championship and fourth in five years was dashed last season when they lost in the NBA Finals in six games to the Toronto Raptors. Curry was a stellar offensive force in those three championships.