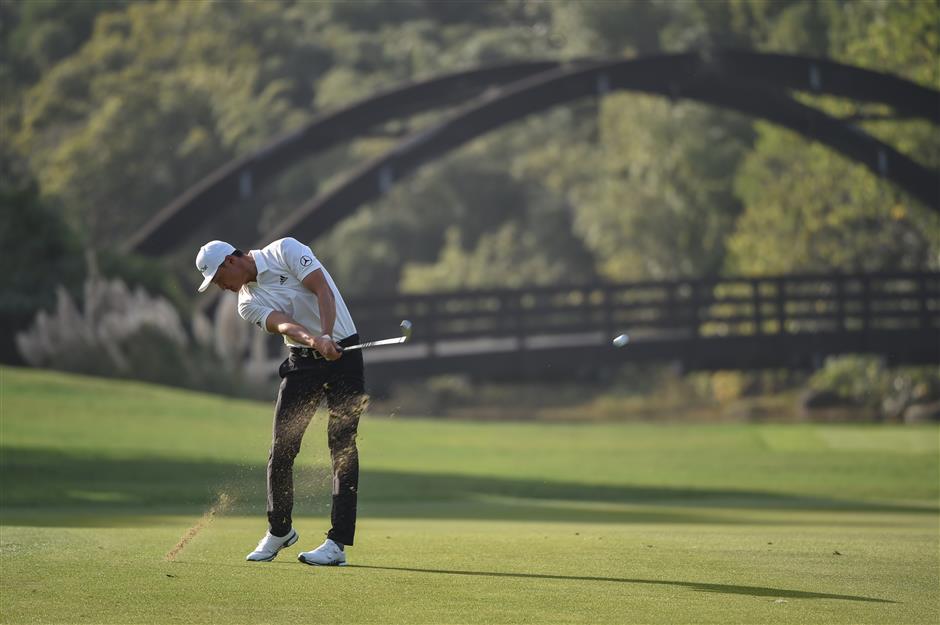 China's Li Haotong plays a shot during the first round of the HSBC Champions at Sheshan International Golf Club in Shanghai on Thursday. The home favorite shot an 8-under-par 64 to grab a one-shot lead.

Li Haotong has come a long way in the HSBC Champions, which he realized before hitting any of his 64 shots on Thursday that carried him to a one-shot lead.

Standing next to him on the tee was Phil Mickelson, a longtime golf idol. Li was part of the HSBC junior program when this World Golf Championships event began in 2009, and he posed for a photo with Lefty.

"My idol then, and my friend now," Li said of the American. "Kind of fun."

He found all sorts of enjoyment on as perfect a day as can be found at Sheshan International, with warm weather and surprisingly calm conditions. Li felt intimidated the first time he played this event when he was 18, and especially as a 20-year-old in 2015 when he was one shot out of the lead going into the final round.

He enjoyed every minute on Thursday, and he gave the home crowd plenty to cheer with his 8-under-par 64, by two shots his lowest round at the Songjiang District golf club.

Li opened with two birdies and finished the back nine with two birdies. And after his lone mistake on the par-4 first hole, he responded with a 4-iron that set up eagle and led to the loudest cheer of a calm afternoon.

"Obviously, it would be great joy for Chinese golfers and Chinese golf fans to have a Chinese player winning a WGC-HSBC Champions here in China," Li said. "But for the next three days, anything could happen."

He was one shot ahead of Victor Perez of France.

Among those two shots behind were defending champion Xander Schauffele and Adam Scott, who both stumbled at the end.

Scott hit a thin shot out of a fairway bunker on No. 9 into the water right of the green and had to get up-and-down to salvage bogey for his 66. Schauffele, sick most of the week and still hoarse, had a wedge to the par-5 eighth and stayed on the upper shelf, leading to a three-putt bogey.

Schauffele had no complaints after a week battling the flu. His fever only broke on Tuesday, though his voice remains strained and his strength not quite up to speed. But the American surged into a share of the lead with nine birdies until one last mistake set him back.

"Maybe I should just keep my flu going and if I can rattle off a 66 every day, I think that would be enough," Schauffele said. "I think a couple more nights of sleep, I'll be in better shape. But it was a dream start with what things were looking like."

South Korean Im Sung-jae and Matthew Fitzpatrick of Britain also were at 66.

Rory McIlroy had three bogeys on the back nine and was going nowhere at even par until he ran off four straight birdies on the front and got in the mix quick with a 67.

"The last few tournaments I've played, I've had a bad opening round and then been trying to play catch up," the Northern Irishman said. "At least now, I'm right in the thick of things from the start, which is a better place to be." 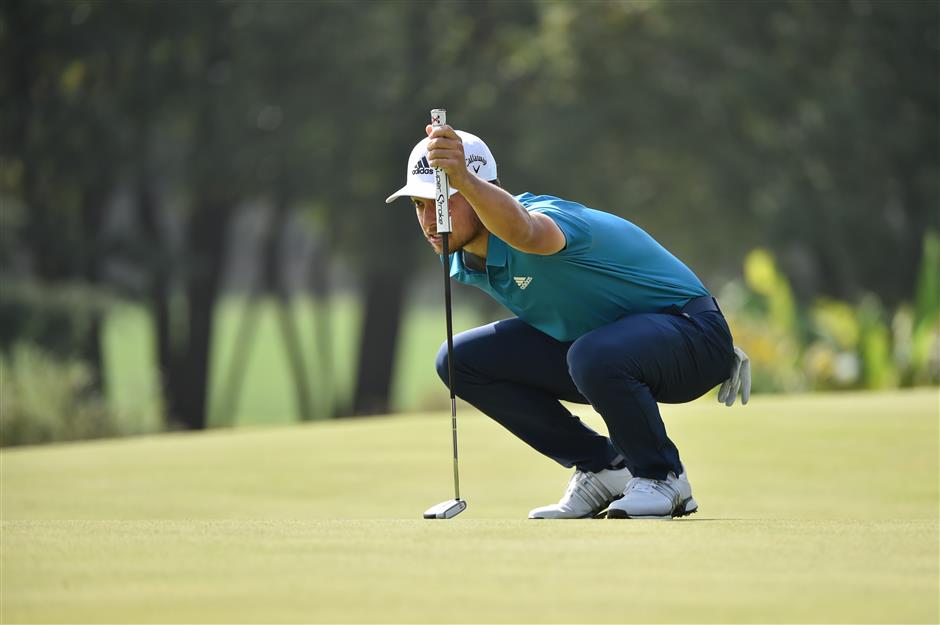 Defending champion Xander Schauffele lines up a putt during the first round of the HSBC Champions in Shanghai on Thursday. The American shot a 6-under 66.

The HSBC Champions is the final event before Tiger Woods and Ernie Els make their wildcard picks for the Presidents Cup, and Im certainly didn't hurt his chances with another good start.

Neither did Corey Conners, who was near the top of the leaderboard for most of the day. He finished with a bogey for a 67. Even so, the Canadian is coming off solid weeks in South Korea and Japan, and he hopes another good one in China is enough to get the attention of Els for the International team that goes to Royal Melbourne in December.

"It's been on my mind," Conners said. "I want to make it as difficult as possible for him not to think of me."

Mickelson, in danger of falling out of the top 50 for the first time in nearly 26 years, opened with a 71.

Sheshan International is in prime condition with thick rough and firm fairways and greens. It's a stronger test than in recent years, though the calm conditions allowed for so many low scores. Nearly one-third of the field broke 70.

"No wind today is giving a false idea of how tough the course is," Australia's Scott said.

It was plenty tough for Hideki Matsuyama, who won here in 2016 and is coming off a runner-up finish to Woods last week at the Zozo Championship in Japan. The Japanese star managed only two birdies, finished with a double bogey and shot 75, ending a streak of six straight rounds in the 60s.

Li didn't feel as though he was in great form coming into this WGC event, but his comfort level — on the course and in front of the fans — was evident.

He practically grew up with the HSBC Champions, from participating in its successful junior program to playing in it the last six years. He is all grown up now, with two European Tour victories and making the Presidents Cup team for the first time.

"It's always good to have a feeling that you know that you are leading, especially in the first two days," Li said. "But what I only want right now is to have a shot at the title on the final nine holes on Sunday."