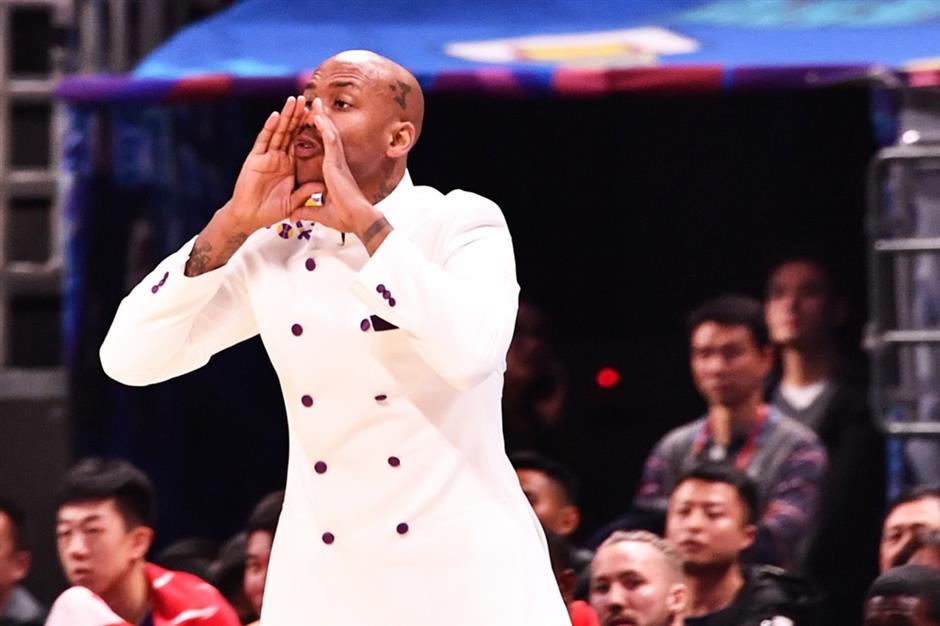 Beijing Royal Fighters coach Stephon Marbury gives instructions to his players during the Chinese Basketball Association game against the Beijing Ducks on Wednesday. The Ducks won 87-79.

The Beijing Ducks staved off the Beijing Royal Fighters 87-79, while Jamaal Franklin registered a routine triple-double in Shanxi Loongs's 101-71 rout of the Jilin Northeast Tigers in the seventh round of Chinese Basketball Association games this season on Wednesday.

Leading by four points heading into the final period, the Ducks took control of the game to build a double-figure advantage and held off their neighbors through a solid performance at the free-throw line.

Justin Hamilton led the charge for the Ducks with 21 points and 15 rebounds. Zhai Xiaochuan and Jeremy Lin contributed 20 and 16 points, respectively.

Zhu Yanxi opened fire beyond the arc to set the score at 21-14 as the first quarter expired. The Royal Fighters rode on a 10-0 run midway through the second period to turn the tide. After Kyle Fogg earned the visitors their first lead of the match, Lin scored six straight points to establish a 34-30 lead for the Ducks into halftime.

The Ducks improved their offensive efficiency back from the locker room, with Hamilton and Zhai mainly contributing to the score, while Fogg kept his team within striking distance with consecutive layups. But a four-point gap still separated the two sides.

Coached by Stephon Marbury, who helped the Ducks win three CBA titles, the Royal Fighters failed to mount a further comeback in the last 12 minutes.

"It was very good for Beijing fans. They played very well in the fourth quarter, and we didn't execute what we were supposed to execute," the American admitted.

In Shanxi, Franklin notched his fourth straight triple-double of the season, helping his team achieve four wins on the trot.

Shanxi led from the first minute and killed any suspense after two quarters by taking a 58-29 lead. Yuan Shuai hit five 3-pointers to score 25 points.

Elsewhere on Wednesday, Keifer Sykes and Zheng Zhun combined for 64 points to lead Guangzhou past Shenzhen 116-88.

With the victory, Guangdong overtook Xinjiang to lead the CBA table with a 6-1 record.

At the other end of the table, Tianjin, the only winless team prior to the game, put an end to its embarrassing record with a 95-93 home victory over Sichuan.