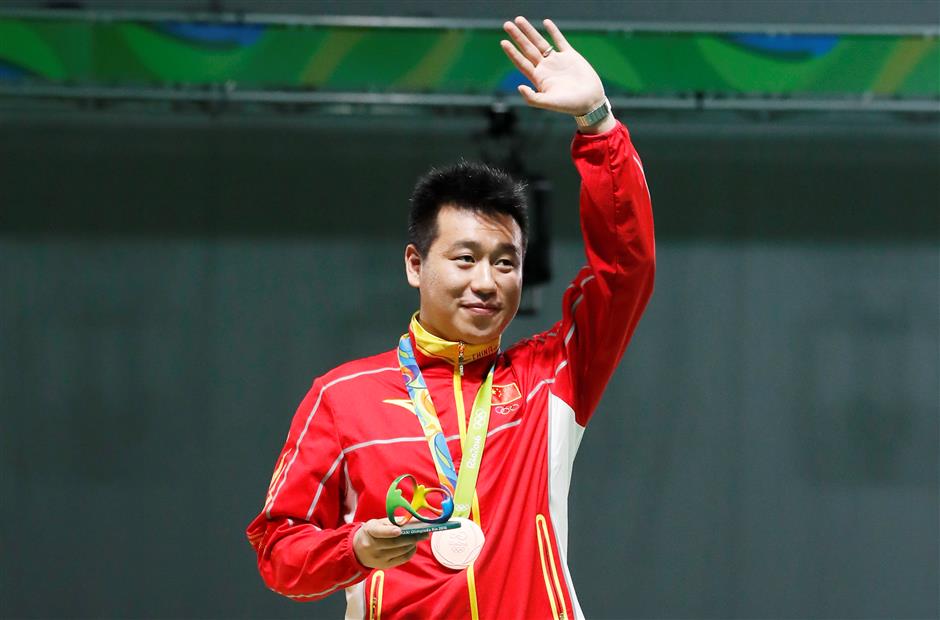 Bronze medalist Pang Wei of China poses on the podium during the victory ceremony for the men's 10-meter air pistol event at the 2016 Summer Olympics in Rio de Janeiro, Brazil, in this August 6, 2016, photo.

The 33-year-old Pang, who captured world championships and Olympics titles in the air pistol in 2006 and 2008, respectively, led all the way in the 25-shot competition to top the podium with 243.7 points, two points ahead of Park Dae-hun of South Korea with 241.7 points.

"This is my first World Cup final title in this discipline," noted Pang, who has now collected air pistol golds in all three major world shooting competitions, saying that 13 years of competing had not been easy.

Pang left the Chinese national team after the 2016 Rio Olympics, where he won bronze before deciding to come back to help and groom young teammates and fight for an Olympic title one more time.

"I will try my best in the upcoming Olympic qualifiers. Winning the gold (here) has boosted my confidence," said the veteran shooter. "However, no matter whether I can go to Tokyo or not, I just want the younger generation to be better."

"Many people love shooting in China but can't get access to really enjoy it. That's what I am passionate about — the promotion of the sport," he added.

"I did very well today, including in the qualification. In the final I did an excellent job," said the 17-year-old Bhaker. "It's been three and a half years since I started practicing. I will practice for winning a medal at the 2020 Olympics."