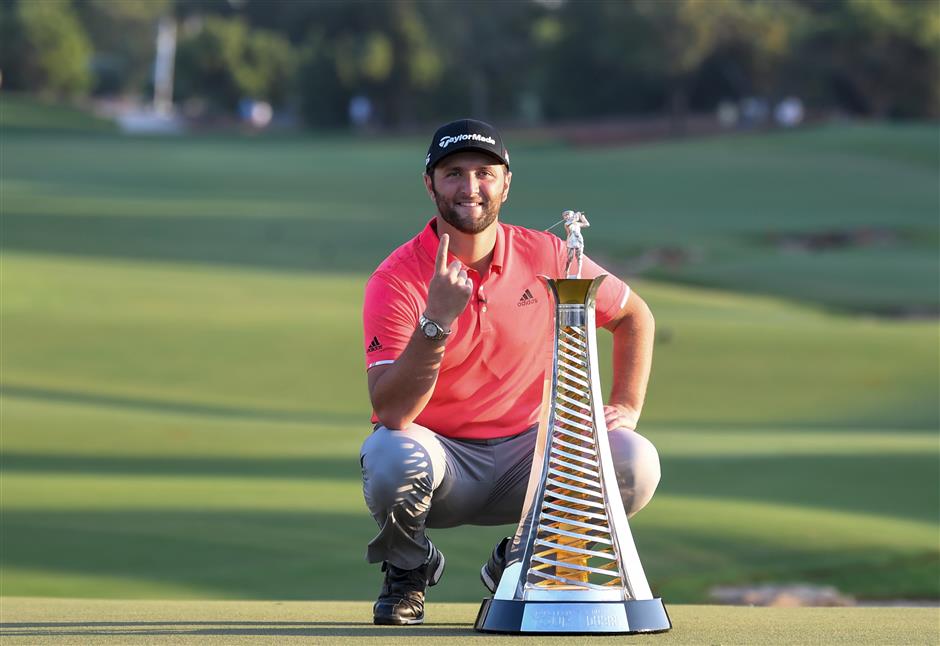 Jon Rahm of Spain poses with the trophy after winning the DP World Tour Championship in Dubai, United Arab Emirates, on Sunday.

Jon Rahm is US$5 million richer after capturing the Race to Dubai title on the European Tour on Sunday by winning the season-ending DP World Tour Championship with a birdie on the final hole.

The world No. 5 got up and down from a greenside bunker at the 18th hole to win the tournament by a stroke from Tommy Fleetwood, who also would have become European No. 1 with a win on the Earth Course in Dubai.

Rahm, who started the final round tied for the lead with Mike Lorenzo-Vera, led by six shots after birdying five of his first seven holes.

However, Fleetwood — playing one group ahead — birdied five of his last seven holes, with his tap-in birdie at No. 18 giving him a 7-under 65 and tying for the lead with Rahm as the Spaniard was putting on the 17th green.

Rahm’s birdie putt there came up a few centimeters short so he needed a birdie on the par-5 last to finish ahead of Fleetwood. His drive was perfect, his approach found the bunker, but he chipped out to 4 feet and rolled in the putt for a 68 as Fleetwood watched in the scorer’s tent.

Rahm revealed that something Jack Nicklaus said when the 18-time major champion spoke about his British Open win in 1966 were his inspiration as he stood on the 16th tee.

“I heard Jack said once, about the Open Championship in Muirfield when he won, he told himself if you finish 3-4-4, you win,” Rahm said. “I told myself, ‘Jon, you’re on 16, one-shot lead, finish 4-3-4, you win the tournament.’ And I played three great holes.”

Rahm is only the second Spaniard to finish a season as European Tour’s No. 1 player, after the late Seve Ballesteros.

“I feel like I’m going to start crying,” Rahm said.

Fleetwood, who started the day four shots off the lead, was eight shots behind after Rahm’s flurry of birdies in the opening seven holes. Still, the Englishman managed to take Rahm down to the last.

“Proud of the way I played the last few holes, proud of my season,” said Fleetwood, who won the Nedbank Golf Challenge in South Africa last week to move into contention for a second Race to Dubai title in three years.

“Fair play to Jon. Cracking birdie down the last when he needed to make it.”

Fleetwood finished second in the Race to Dubai standings, with Austrian Bernd Wiesberger in third place.

World No. 2 Rory McIlroy finished seven shots off the lead with a sluggish round of 73, one clear of last year's Dubai winner Danny Willett and two ahead of Sergio Garcia, Tom Lewis and Thomas Pieters.

After closing with a final round 65, Pavit — who suffered a playoff defeat at the recent Thailand Open — redeemed himself in a four-way battle against compatriot Phachara Khongwatmai, Australian David Gleeson and Aman Raj of India.

Pavit, 30, told reporters it had been an "unbelievable week".

"It is the best chip in my life," he said of his hole-out.

Gleeson, who led after three rounds, could have wrapped up the tournament on the 72nd hole, but a costly bogey gave him a 3-under 68.

Phachara shot a final-round 67 and Raj a blistering 63, with all the playoff contenders ending regulation play on matching totals of 13-under-par 271.

On the first play-off hole — which was held on the par-4 18th — Raj bowed out with a bogey. 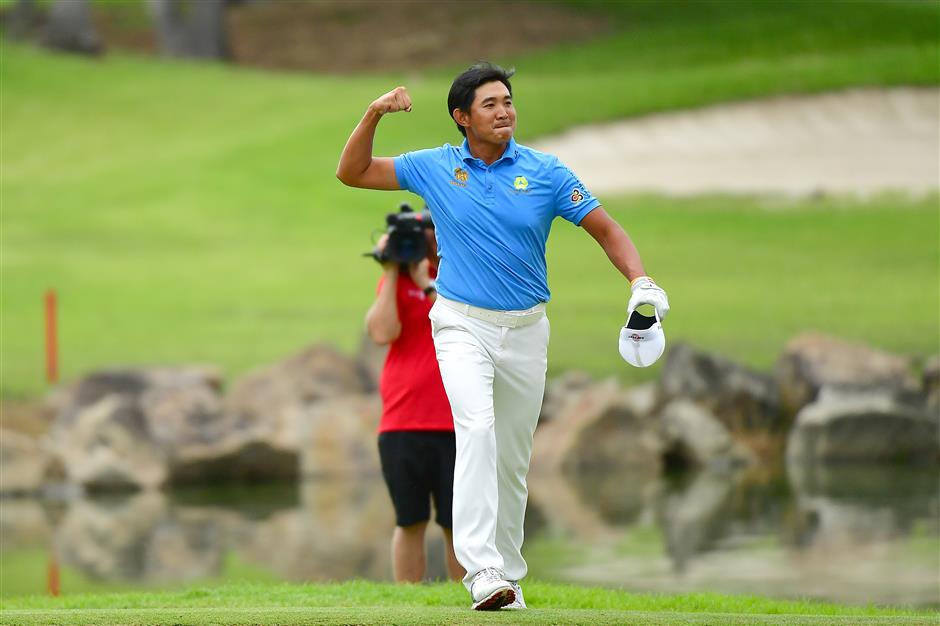 Pavit Tangkamolprasert reacts during the final round of the Sabah Masters at the Sutera Harbour Golf and Country Club in Kota Kinabalu, Malaysia, on Sunday. The Thai won on the second playoff hole.