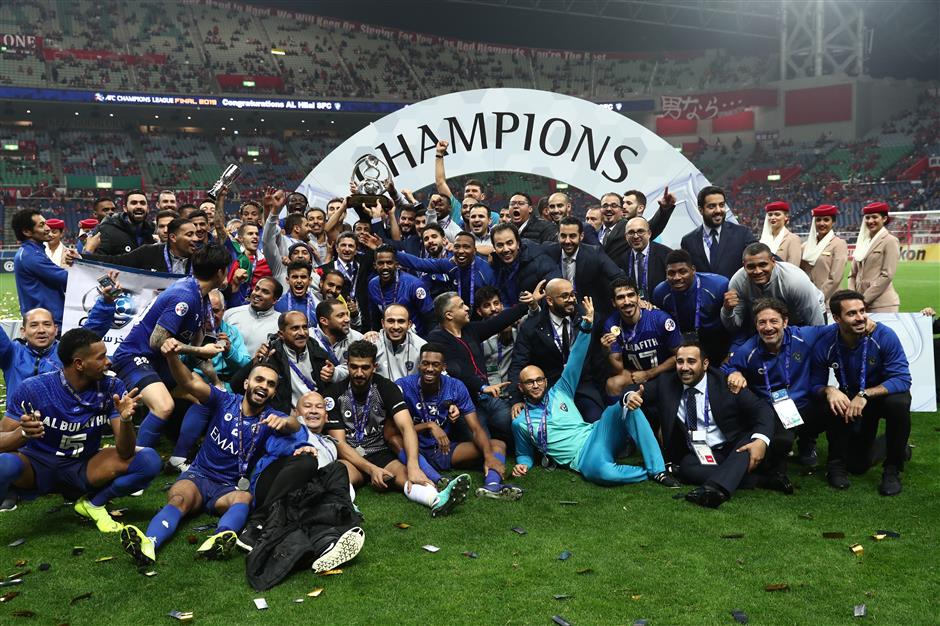 Members of al-Hilal celebrate their Asian club title following a 2-0 victory in the second leg of the AFC Champions League final against Urawa Red Diamonds in Saitama, Japan, on Sunday. The Saudis won 3-0 on aggregate.

Al-Hilal won the AFC Champions League for the first time as a 2-0 win against Urawa Red Diamonds in the final's second leg on Sunday gave the Saudi Arabian side a 3-0 aggregate victory over the twice champions from Japan.

Salem al-Dawsari struck 16 minutes from fulltime from close range to all-but ensure the trophy would return to Saudi Arabia for the first time in 14 years, before Bafetimbi Gomis sealed the win in injury time.

It was al-Hilal's first ACL title since the competition was launched in 2002 and its third in the continent's premier club competition after victories in the Asian Club Championship in 1991 and 2000.

Al-Hilal also become the first team from the west of the continent to claim the title since Qatar's al-Sadd in 2011 and it is the first club from Saudi Arabia to be crowned Asian champion since the second of al-Ittihad's back-to-back successes in 2005.

Leading 1-0 from the first leg by virtue of a goal from Peru international Andre Carrillo on November 10 in Riyadh, al-Hilal set out to frustrate the Japanese side in Saitama with a well-drilled defense that allowed the home team few chances.

Takahiro Sekine should have finished off a fine attacking move down the Urawa left that the wingback started himself while Takuya Aoki's attempt from distance was high and wide.

Urawa goalkeeper Shusaku Nishikawa, who missed the first leg due to suspension, kept his team in the game when he twice denied former Swansea City striker Gomis from close range in the second half while the home side offered little at the other end.

Al-Hilal ramped up the pressure as the final whistle approached and, with 16 minutes remaining, al-Dawsari was left with the simplest of finishes.

A flowing move from one side of the pitch to the other unlocked the Urawa defense, before Sebastian Giovinco set up the Saudi international to score.

Gomis then slotted home deep into injury time to put the result beyond doubt and seal victory for al-Hilal.

“This team was born from day one when we started to work in our camp in Austria,” said Gomis, who led the tournament with 11 goals. “We have a lot of individual talent, but the collective part of the work is very important to bring this all together.”

Urawa, which also won the title in 2007 and 2017, was bidding to become the first three-time winner of the tournament.

Al-Hilal lost in the final in both 2014 and 2017 but Razvan Lucescu’s side never looked like allowing anything similar to happen in front of a boisterous crowd of 58,109 at Saitama Stadium.