Russia's anti-doping chief said on Tuesday he expected the country to be barred from all sporting competition for four years, after a bombshell recommendation from the World Anti-Doping Agency that shocked Russian athletes.

It recommended Russia also face a four-year ban from staging or bidding for major international sporting events — putting Saint Petersburg's status as a host city for the Euro 2020 football tournament in doubt.

The committee's recommendation is set to go before WADA's Executive Committee at a meeting in Paris on December 9.

Asked if he expected the recommendation to be upheld, RUSADA chief Yury Ganus said: "That's the reality."

"We are plunging, for the next four years, into a new phase of Russia's doping crisis," Ganus said, pointing out that the ban would affect Russian athletes at the 2020 Summer Olympics in Tokyo and 2022 Winter Olympics in Beijing.

"The most difficult and tragic thing is that our athletes have become hostages of the actions of our sports officials," he said.

The proposed sanctions are the latest chapter of a saga that began in 2015 when an independent WADA commission investigating allegations of Russian doping during the 2014 Winter Olympics in Sochi said it had found evidence of a vast state-sponsored system stretching back years.

Russian track and field athletes were barred from competing at the Rio Olympics in 2016 although Russians competing in other events were allowed to take part.

The ban was widened to include all events at the 2018 Pyeongchang Winter Olympics, though Russian competitors who could prove they were above suspicion were able to compete as neutrals under the Olympic flag.

"We are basically accused of everything everywhere, whatever sphere of international life you take." 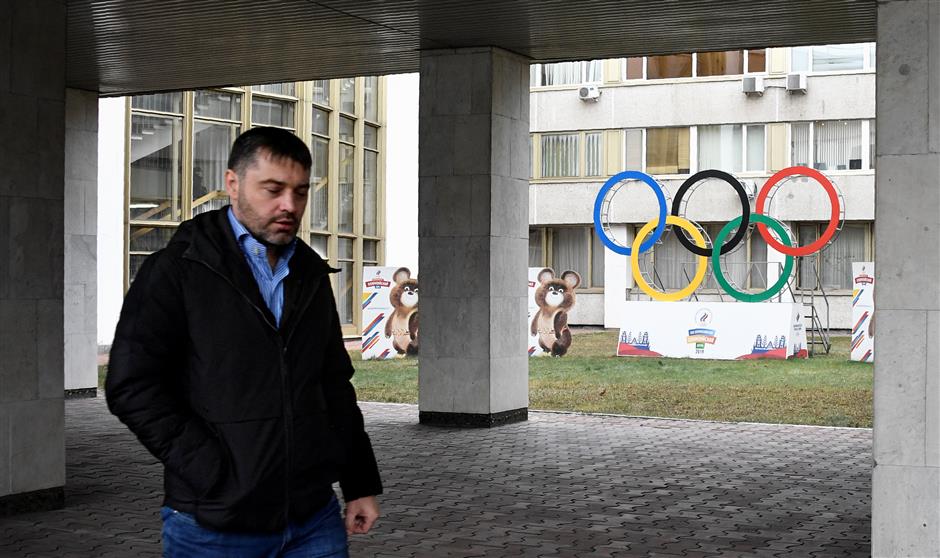 A man walks in front of the Russian Olympic Committee headquarters in Moscow on Tuesday. Russia's anti-doping chief said he expected the country to be barred from all sporting competition for four years, after a bombshell recommendation from the World Anti-Doping Agency that shocked Russian athletes.

Russian sports stars and officials reacted with dismay and argued another ban would punish athletes who had nothing to do with historic doping claims.

"It appears this has been planned in advance and they are now settling scores," said Umar Kremlev, president of the Russian Boxing Federation.

"Russia plays an important role in the development of world sports. How can such a country be banned?"

Pole vault star Yelena Isinbayeva, who has been sharply critical of WADA, told RIA Novosti: "I don't have any illusions about a positive outcome."

Some commentators, though, said Russia had only itself to blame.

Russia is like a "violent" patient who needed to be "tied down because traditional treatment has not helped", Nikolai Yaremenko, the chief editor of Sovetsky Sport newspaper wrote in an editorial.

Full disclosure of the data was a key condition of Russia's controversial reinstatement by WADA in September 2018.

But WADA said in its statement on Monday that the data, which had been in the hands of Russian criminal investigators, was "neither complete nor fully authentic".

"Honestly, I am waiting for the president to take an active part in this," Ganus said.

"We need to push through real changes," he added. "We need new sports leaders."

The ban would be a huge blow to the Kremlin chief who has staked Russia's prestige and his own reputation on sporting achievements.

Russia pulled out all the stops to host the football World Cup in 2018 as well as the Sochi Winter Games in 2014.

If the sanctions are approved by WADA's Executive Committee, Russia can appeal the decision at the Court of Arbitration for Sport.