The suspense over the winner of this year’s CSL championship was kept until the last round by Evergrande and Beijing Guoan, with the latter just two points behind the leader. All eight matches of the last round kicked off at the same time on Sunday afternoon.

Guoan needed to defeat Shandong Luneng at home and hope that Cannavaro's side lost to Shenhua. Guoan triumphed 3-2, thanks to a 91st-minute goal, to finish runner-up on 70 points, two behind Guangzhou.

It has been an eventful year for the 46-year-old Cannavaro, who had a short spell at the helm of the Chinese national team in March before he decided to step down a month later citing the difficulty of coaching both the national and club teams AT the same time.

Cannavaro, in fact, appeared to be on the brink of the sack just a few weeks ago.

Evergrande was then top of the CSL but in the middle of a slump and club bosses put veteran captain Zheng Zhi in temporary charge, telling Cannavaro to attend "corporate culture training".

The former Juventus defender and 2006 World Cup winner was retained as coach in early November but with a warning that he must "raise the players' overall fighting ability to win the Chinese Super League".

Evergrande duly won its next two matches, notably against outgoing champion Shanghai SIPG, to put it on the brink of the title.

“I’m very happy that our hard work was paid off,” the Italian said after Sunday’s match at a joyful Tianhe Stadium in Guangzhou, south China's Guangdong Province. “It was not that easy a match today, especially in the first half. The players were in a tight form considering it was a match to decide the championship. But I’m proud of the players, who managed to conquer the difficulty, as well as all the many difficulties through the season.” 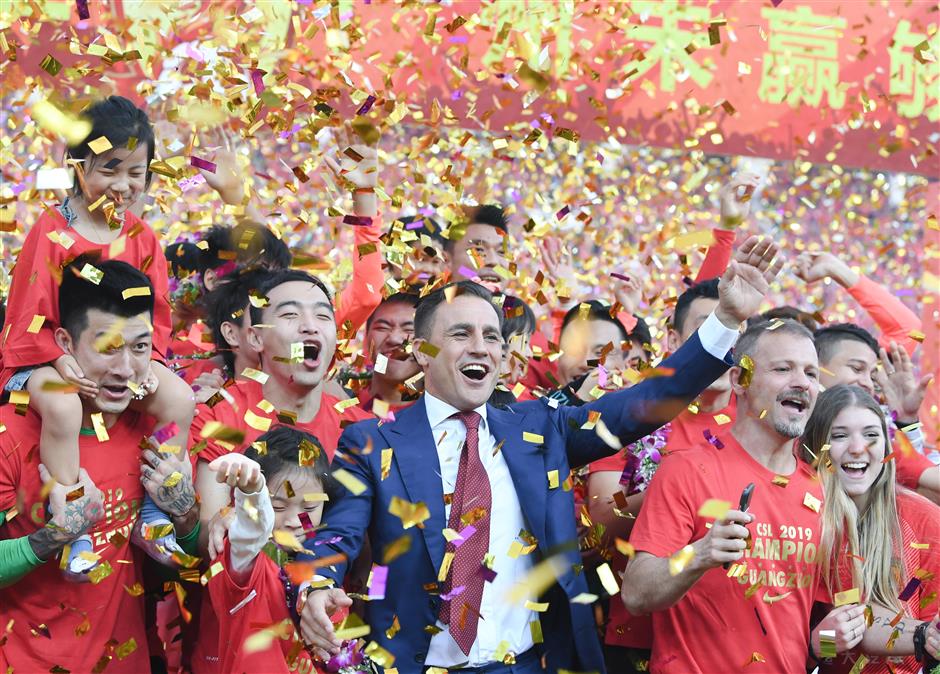 Striker Wei Shihao gave Evergrande the lead minutes before the interval. Park Ji-soo and Elkeson each contributed a goal in the second half to fix the score at 3-0. Evergrande’s eight CSL titles leveled the record of the most top-tier domestic league titles held by Dalian between 1994 and 2005.

SIPG whitewashed relegated Shenzhen FC, coached by another Italian Roberto Donadoni, 6-0 at Shanghai Stadium, thanks to the impressive foreign trio of Hulk, Oscar and Marko Arnautovic. Arnautovic scored four goals, Hulk and Oscar each added one.

Vitor Pereira’s team finished third on 66 points but its 2020 season will start early, as SIPG will have to take part in the preliminary round of next year’s AFC Champions League in January.

Shenhua ended the season in 13th place in the 16-team league on 30 points. Shenzhen and Beijing Renhe, which lost 0-2 at Rafael Benitez's Dalian Yifang, were relegated.

But Shenhua's season is not over yet as it will take on Shandong in the second leg of the CFA Cup final at Hongkou Football Stadium on Friday. Shandong, which finished fifth in the CSL with 51 points, holds a 1-0 advantage after a first-leg home victory last month.

“I want the players to hold their heads up when we go back to Shanghai, as we have a very important 90 minutes to play in five days,” Shenhua’s South Korean manager Choi Kang-Hee said after the Sunday loss. “The players have shown lax form since escaping the relegation zone. I hope they will adjust their mindset well and concentrate on the Cup final.”