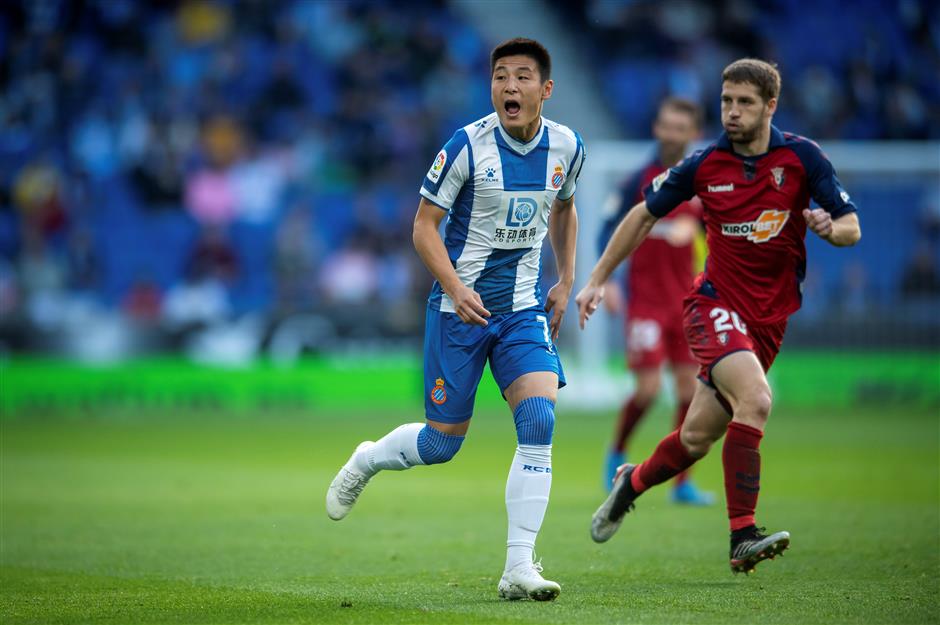 Espanyol striker Wu Lei reacts during the Spanish La Liga match against Osasuna at the RCDE Stadium in Barcelona in this December 1, 2019, photo. Espanyol lost 2-4.

Espanyol's Wu Lei held an online question and answer session to promote a video game which is using the Chinese striker as its main image in China and discussed his side's delicate situation in Spain's La Liga.

Although Espanyol has breezed through its Europa League qualifying group, playing in two competitions has taken its toll on a thin squad and the Barcelona-based outfit is second from bottom in the Spanish league, with just nine points from 15 matches and with a daunting visit to Real Madrid looming at the weekend.

"It's a delicate moment for the team. We never imagined we would be in this situation, but I am confident and we all should be confident, because the squad is good enough," Wu explained.

Last weekend saw Espanyol surrender a 1-0 lead at home to Osasuna to lose 2-4 against a rival that played for 40 minutes with just 10 men, causing Espanyol coach Pablo Machin to publicly doubt his players.

"We really need a win and I'm sure that when we win a game everything will change," commented the former Shanghai SIPG striker, who insisted he felt good after struggling with a shoulder injury in recent months.

"I feel better all the time," noted Wu, who said the only difference between his life in Spain and China was that "here I go to Spanish class once a week."

Finally, he expressed his wish to lead China onto the pitch at the FIFA World Cup: "It would be a dream come true for me and for all of our fan."

The 28-year-old also had praise for Argentina and Barcelona striker Lionel Messi, who was awarded the Balon D'Or — a record sixth one — in Paris on Monday.

"When you play against him on the pitch, it's not like seeing him on TV, when you face him you can feel his talent and his strength," Wu concluded.