Two-time Grand Slam winner Garbine Muguruza advanced to the semifinals of the Shenzhen Open with a battling 6-4, 2-6, 6-4 victory over Kazakhstan's Zarina Diyas on Thursday.

Spaniard Muguruza closed out the match with an ace — her 13th in the contest and her highest tally in a match in four years — and reached her first semifinal since successfully defending the Monterrey Open title in April.

The sixth seed, ranked 35 in the world, also won three consecutive matches for the first time since last year's French Open as she looks to recapture the form that catapulted her to the world No. 1 in 2017 ahead of the Australian Open later this month.

"I was expecting a very tough match and at the end it was," Muguruza said after ending a seven-match winning streak for Diyas.

"I think she came out in the second set playing much better. I just kept competing and I'm happy with these kind of victories."

In a topsy-turvy match that lasted more than two hours, Wang broke her opponent six times but Alexandrova responded with seven service breaks of her own to reach the final four.

Alexandrova lost her only previous meeting with Muguruza, suffering a Wimbledon first-round defeat in 2017 as Muguruza began her run to the title that year.

"We played once, but it was a few years ago," Alexandrova said. "I lost, and I hope I can do better tomorrow."

The other semifinal will be between unseeded Kristyna Pliskova of the Czech Republic and Kazakhstan's seventh seed Elena Rybakina.

Rybakina booked her place with a 6-4, 4-6, 6-2 victory over the third seed Elise Mertens of Belgium. Pliskova beat Ukraine's Kateryna Bondarenko 6-4, 6-4.

Mertens follows top seed Belinda Bencic and second seed Aryna Sabalenka — who was the defending champion — out of the Shenzhen Open.

The Australian Open, the first Grand Slam of the year, begins in under a fortnight.

In Brisbane, Queensland, world No. 1 Ashleigh Barty suffered a surprise 4-6, 6-7 (4) defeat on Thursday to American qualifier Jennifer Brady, who claimed the first top-10 win of her career to advance to the Brisbane International quarterfinals. 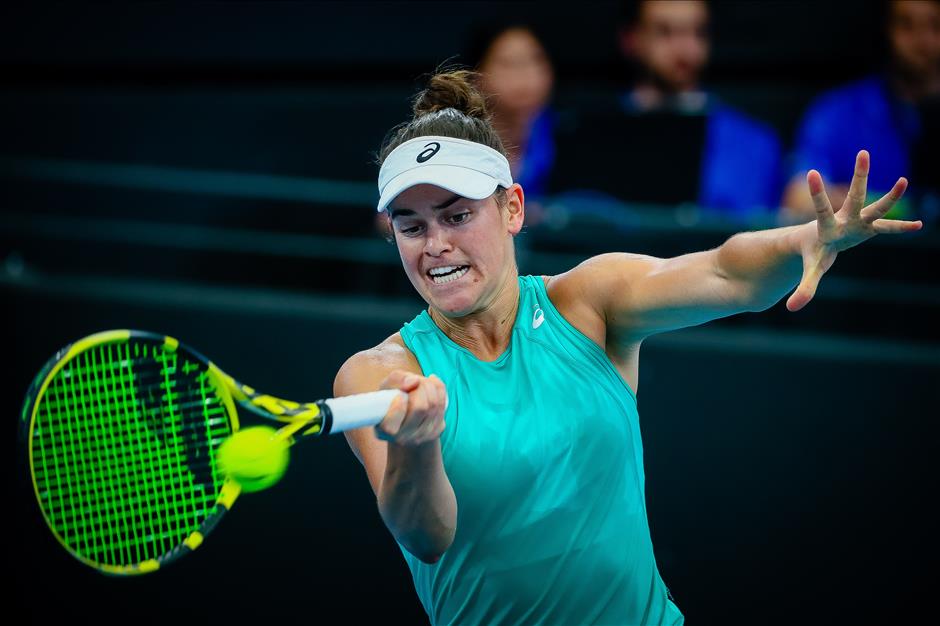 Jennifer Brady hits a return against Ashleigh Barty of Australia during their second-round match at the Brisbane International in Brisbane, Queensland, on Thursday. The American won 6-4, 7-6 (4).

With the tournament moving into the Pat Rafter Arena at the Queensland Tennis Centre following the end of the ATP Cup group stage, Brady had to contend with not only the Australian top seed, who was given a bye to the last-16, but also a vociferous home crowd.

Barty, who had never dropped a set to Brady in two encounters last year, was unable to muster a single break point while the American needed only one break of serve in the opening set before sealing the result in the second set tiebreak.

"I'm very happy to get the win," Brady said. "Ash is obviously a great player and a great person.

"It's a little bit surreal. I'm super stoked and I'm shaking a little bit, but I really played well today."

Barty, who exited the tournament in the first round in 2018, struck more winners than Brady but 16 unforced errors opened the door for her American opponent, who wrapped up the match in 91 minutes.

Despite losing her season-opener, Barty remains upbeat about her Australian Open preparations and said she does not feel any extra pressure because of her top ranking.

Brady, who beat Maria Sharapova in the first round after coming through three qualifiers, will next face fifth seed Petra Kvitova of the Czech Republic.

Czech second seed and defending champion Karolina Pliskova had to work hard to avoid the same fate as Barty, as she overcame a mid-match blip to secure a 6-4, 6-7 (5), 6-1 win over home favorite Ajla Tomljanovic.

Third seed Naomi Osaka of Japan also had a difficult outing as she came back from a set down to beat American Sofia Kenin 6-7 (3), 6-3, 6-1.