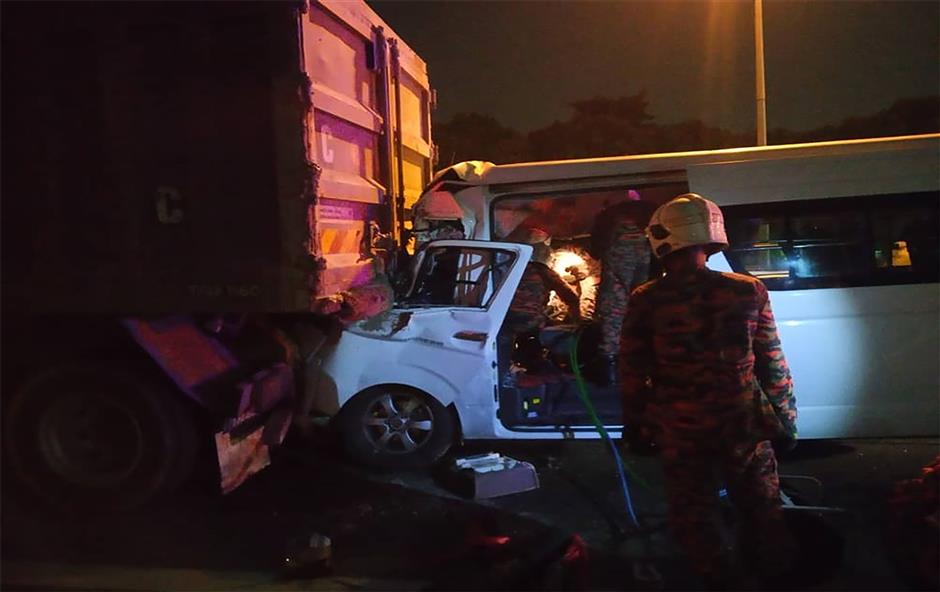 This handout photo taken and received on January 13, 2020 from the Malaysia Fire and Rescue Department shows rescue personnel working at the scene of a vehicle crash that killed a driver and injured four badminton players, including world number one Kento Momota, at a major highway linking the capital Kuala Lumpur to the country's main airport in Kuala Lumpur.

Badminton world number one Kento Momota was injured and his driver was killed in a crash near Kuala Lumpur on Monday just hours after he won the Malaysia Masters.

Police said the Japanese star, 25, suffered a broken nose and cuts to his face when the van carrying him to the city's airport crashed early in the morning, in a blow to his preparations for this year's Tokyo Olympics.

The driver was killed at the scene after the vehicle collided with a slow-moving lorry on a highway. An assistant coach, physiotherapist, and badminton official also suffered minor injuries.

The accident came after the dominant Japanese star began his 2020 season in style Sunday with victory over Denmark's Viktor Axelsen in Kuala Lumpur.

But he added those hurt were "recovering well, (and) all four are also in stable condition".

The others hurt suffered facial, leg, hand and head injuries, according to the police.

The Badminton Association of Malaysia said in a statement they were "saddened" by the crash.

The accident happened around 4:40am (2040 GMT Sunday), and 10 firefighters rushed to the scene, senior fire and rescue department official Norazam Khamis told AFP.

The injured "were able to walk out of the van by themselves with some scratches", he added. Pictures showed the front of the van crushed against a lorry but the back section appeared intact.

Momota enjoyed a stellar 2019, winning a record 11 titles including the World Championships, Asia Championships and All England Open, a turnaround for a player who had been banned for gambling in 2016.

This means he won more tournaments in a season that any other men's player, including Malaysia's Lee Chong Wei and Chinese great Lin Dan.

There is only one major individual title missing from the Japanese player's trophy haul -- Olympic gold.