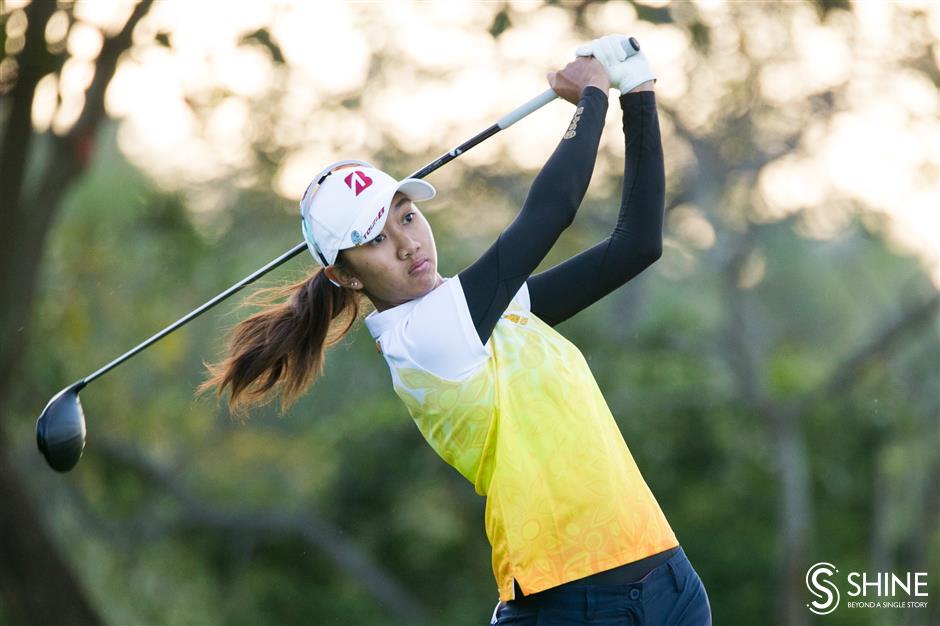 Thailand's Kultida Pramphun in action during the first round of the China LPGA Tour Qualifying Tournament at The Dunes at Shenzhou Golf Club West Course in Wanning, Hainan Island, on Wednesday.

Kultida Pramphun set the early pace at the China LPGA Tour Qualifying Tournament on Wednesday as the Thai teenager carded a first-round 6-under-par 66 for a one-stroke lead on Hainan Island.

Japan’s Mana Shinozaki put herself in position to claim one of the 30 full-time CLPGA Tour cards on offer for the 2020 season when she opened with a 67 to sit second at the 72-hole tournament being played at The Dunes at Shenzhou Golf Club West Course in Wanning in south China.

American Anne Yu was the top amateur in equal ninth after an opening-round 70. Fellow amateur Yin Yuoning was the top Chinese mainland player as the Shanghai teenager carded a 71.

Kultida, a second-year pro, carded six birdies, including four on the back nine of the Tom Weiskopf-designed seaside course, in her bogey-free round. Last March, the 19-year-old won her maiden professional title at the Singha-Sat Championship on the Thai domestic tour.

“I want to try more tournaments so I came to the CLPGA Q-School. This is the first CLPGA Qualifying Tournament for me and I’m happy to be ahead in the first round,” said the Pathum Thani native.

“The course is beautiful, the fairways are wide and my putter was good. Everything looked nice today. Tomorrow, I just pay attention to my own game and try my best.”

Shinozaki, who is in China after failing to pass the JLPGA Tour pro test, started her day on the West Course back nine and carded a round featuring six birdies and a bogey.

“Today, I felt good and everyone looked nice here. Tomorrow, my goal is under par and I’ll try my best,” said the 22-year-old, who turned pro in 2017 and is currently 517 in the Rolex World Rankings.

“I am satisfied with my game today. My driver and irons were good but my putter was a little bad. Tomorrow, I’ll focus on improving my putter. I hope I can play better in the next round,” said the 17-year-old Jilin native.