Riri Sadoyama roared to the top of the leaderboard after the second round of the China LPGA Qualifying Tournament on Thursday when the Japanese teenager carded a 7-under-par 65 for a two-stroke lead on Hainan Island.

Through 36 holes at The Dunes at Shenzhou Golf Club West Course, Sadayama was 10-under 134. At the 72-hole qualifier, 30 full-time playing cards are on offer for the 2020 CLPGA Tour season.

Overnight leader Kultida Pramphun of Thailand was alone in second place after a 70. Chinese amateur Yin Ruoning (67) and Japanese Mana Shinozaki (71) were equal third at four strokes back.

Ridhima Dilawari, the rising Indian star who won last week in Pune, came in with a 67 to sit equal fifth with former US LPGA Tour regular Patcharajutar Kongkraphan (71) of Thailand.

Sadayama, a rookie pro, took the halfway lead in Wanning after a magnificent home stretch where she went 6-under over the last six holes on the strength of four birdies and an eagle at the 486-yard 14th hole.

“My putter was very good after nine holes so I made several birdies,” said the 19-year-old from Okinawa. “At the par-5 14th I made an eagle on the third shot with a chip-in and that had me excited. Being under par for the next round is okay so I am just going to pay attention to my game.”

Kultida, who started the day with a one-shot lead, took six holes to make her first birdie when she carded a two at the 173-yard par-3. She then picked up another stroke with a birdie four on the ninth hole to make the turn at 34 before playing par golf over the back nine. 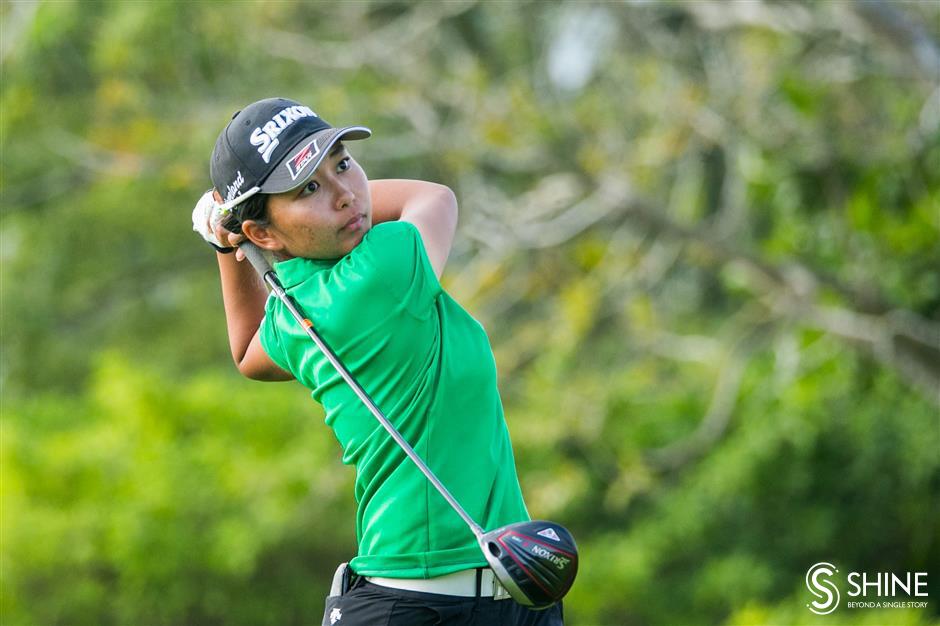 Riri Sadoyama in action during the second round of the China LPGA Qualifying Tournament at The Dunes at Shenzhou Golf Club West Course in Wanning, south China's Hainan Island, on Thursday. The Japanese fired a 7-under-par 65 for a two-stroke lead.

“The weather was good today but it was windy. My putter was not very good so I made a bogey five at the 11th hole. Tomorrow, I just want to keep under par,” said the second-year pro from Pathum Thani.

Yin, who is coming off a stellar amateur career where she won seven championships last year, reeled off five birdies through the first 12 holes and then played par golf back to the clubhouse in her bogey-free morning round.

“It was a satisfying day today and my putter was good. In fact, I did better than yesterday,” said the 18-year-old national team member who plays out of Shanghai’s Lake Malaren Golf Club. “I have played both a morning round and an afternoon round so far at this tournament and I am confident for the next two rounds.”

Patcharajutar, a four-time winner on the CLPGA Tour in 2010-2011, held steady in the overcast and windy conditions to card three birdies and two bogeys.

“My driving continued to be the good part of my game and that’s why I am still under par,” said the 28-year-old Nakhon Ratchasima native. “Tomorrow, I need to just focus on every shot and every hole.”

Players finishing 31st to 40th this week will receive entry into a limited amount of tournaments for the 2020 season.