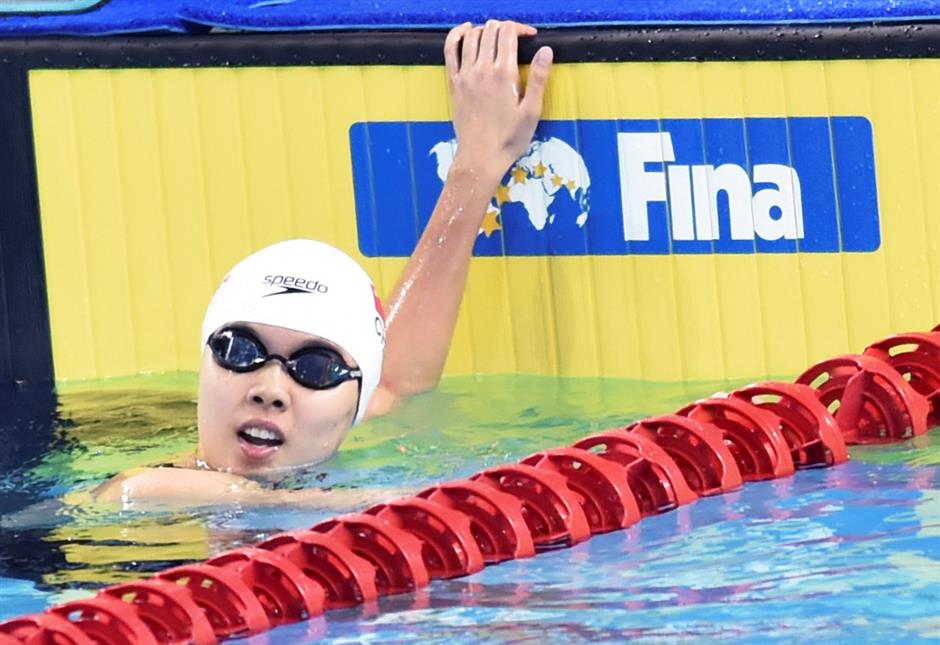 Yang Junxuan reacts after winning the women's 200-meter freestyle final at the FINA Champions Swim Series in Beijing on Sunday. The Chinese swimmer won in a time of 1 minute, 54.98 seconds.

Liu Xiang broke the Asian record in the women's 50-meter freestyle as Olympic champion Sun Yang claimed a comfortable victory in men's 400 freestyle at the FINA Champions Swim Series in Beijing on Sunday.

China wrapped up four more golds on the second day for a total of nine gold medals from the two-day Champions Series.

Liu won the first gold for China on the second day of the Beijing leg, clocking 24.03 seconds for a new Asian record, improving on her performance on January 15 by 0.01. Ranomi Kromowidjojo, from the Netherlands, finished second in 24.38.

"I did not expect to swim the Asian record and win all the four events I took from the Shenzhen and Beijing legs. The results boost my confidence and I want to swim better at the Olympic Games," said the 23-year-old.

"Three titles in five days, I am pretty happy with my performance as I was smooth and steady in every race. I am also happy to swim with the best swimmers in the world, such as Danas and the others at the beginning of the year. It is the only international event we have before the Olympics, it is like a rehearsal for us," said the Chinese captain.

Yu Jingyao brought the third gold for China in the women's 100 breaststroke in 1:07.18, and Yang Junxuan broke the Chinese national record by winning women's 200 freestyle in 1:54.98.

About 70 top swimmers from 26 countries and regions competed in the FINA Champions Swim Series.