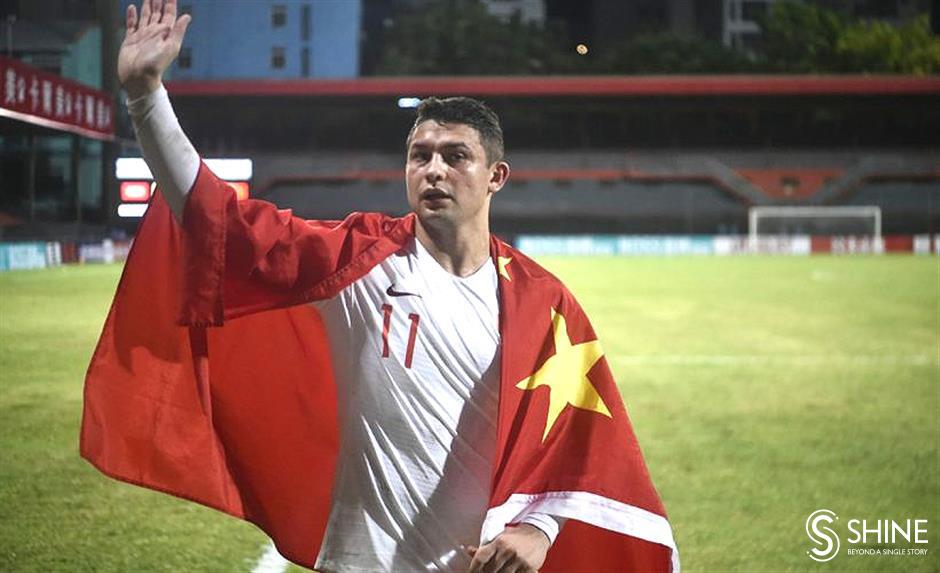 China's men's national football team announced a 27-man roster on Wednesday for a training camp set for Shanghai in May, with three naturalized players included in the list for the first time in the team's history.

Brazil-born striker Aloisio Goncalves, whose Chinese name is Luo Guofu, joins his Guangzhou Evergrande teammate Ai Kesen, also from Brazil, and Beijing Guoan midfielder Li Ke, who was born in the United Kingdom and known as Nico Yennaris, to become the third naturalized player to wear the Team Dragon jersey.

The 31-year-old Luo, who was the top scorer in the Chinese Super League in 2015, has played in China since 2014, and is eligible to play for the country after meeting FIFA's five-year residency requirement.

However, star forward Wu Lei, the Espanol striker who tested positive for COVID-19 in Spain in March, has not been called up by the national team.

Team China head coach Li Tie and his players will assemble on May 10 in Shanghai for a 18-day training camp to prepare for the 2022 FIFA World Cup qualifiers, which have been postponed to at least October this year.

Li left out Yu Hanchao, caught altering the number plate on his Mercedes 4X4, from his training squad.

The Chinese international was released from 15 days' custody following the offense and apologized on Wednesday.

CSL champion Evergrande sacked Yu after the winger was filmed changing a letter E to an F on his vehicle in mid-April.

Police in southern Guangzhou City fined Yu 5,000 yuan (US$700) and he was held by authorities in "administrative detention."

Yu, who has 59 caps and nine goals for China, was freed on Wednesday, state media said.

In his first public reaction to the controversy, the 33-year-old blamed his "weak awareness of the law."

"I was chancing my luck, which violates traffic regulations," Yu wrote on Weibo, without explaining why he doctored the number plate.

Reports have speculated he was trying to evade traffic restrictions limiting drivers based on their license numbers.

"I sincerely apologize to everyone and hope my case will serve as a warning to others.

"I wholly accept all the criticism and will always remind myself to be a law-abiding citizen in future."

Yu is searching for a new club after Fabio Cannavaro's Evergrande said he had "severely violated" team rules.

Yu's international career also appears to be over, although he has not featured for his country since the Asian Cup last year.