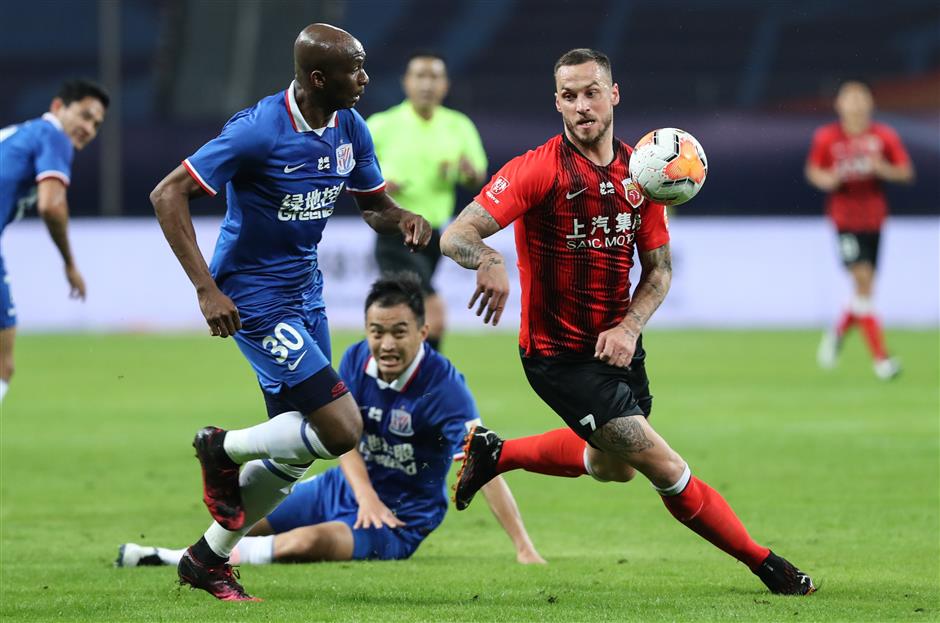 SIPG's Marko Arnautovic suffered a bloodied nose in a clash with Shenhua's Stephane M'Bia, while SIPG goalkeeper Yan Junling was substituted before the break after taking a heavy blow to the head.

M'Bia was on hand to snuff out SIPG's best chance 15 minutes from time when the former Queens Park Rangers defender blocked Li Shenglong's attempt on the goal-line with goalkeeper Zeng Cheng well beaten.

Li was again denied, this time by Zeng, five minutes from time to leave SIPG coach Vitor Pereira screaming in frustration, while Yang Xu almost stole the win for Shenhua with an injury-time header, but the ball sailed just the wrong side of the post.

"We played actively on the pitch and perfectly carried out the tactics of the head coach, but we did not seize a few good opportunities. I think the next game is more important," SIPG midfielder Murahmetjan Muzepper said.

The 2,000-odd fans were allowed into the stadium for the first time, after the CSL reported zero COVID-19 infections in the first phase of this season from July 22 to September 28.

The teams will meet again on Friday, with the winner taking on either Jiangsu Suning or Chongqing Lifan in the playoff semifinals.

Henan Jianye, meanwhile, will take a 1-0 advantage into the second leg of their relegation playoff against Wuhan Zall after Brazilian striker Henrique Dourado scored the only goal of their game in Dalian, northeastern Liaoning Province.

Dourado saw his penalty saved after Christian Bassogog was upended in the area by Liao Junjian but scored on the rebound after goalkeeper Dong Chunyu parried the ball back into his path.

The pair face off again on Friday with the winner guaranteed a place in the top flight of Chinese football next season.

The loser will remain in the battle to avoid claiming one of the two relegation places.