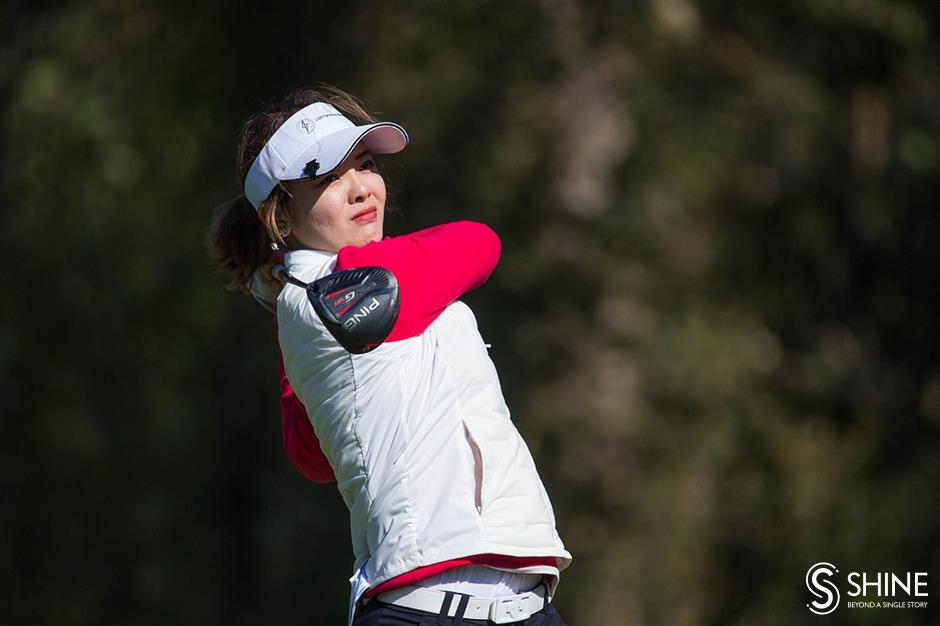 Zhang Weiwei in action during the second round of the Beijing Pearl Challenge at Beijing Orient Pearl Country Club in the Chinese capital on Thursday.

Zhang Weiwei served notice on Thursday that she won’t be giving up her Beijing Pearl Challenge title without a fight.

With most of the field struggling in the cold weather at Beijing Orient Pearl Country Club, defending champion Zhang carded a second-round 1-under-par 71 to share a three-stroke lead with overnight co-leader Liu Wenbo (73).

Zhang Jingwen (73) was alone in third, while Pan Yanhong shot 70 to sit a shot further back at four strokes off the pace. Liu Yan, the other overnight co-leader, ballooned to a 78 to fall five shots behind in equal fifth with Guo Caizhu (74).

Super rookie Yin Ruoning, winner of the first three events this season, also struggled to a 78 and was in a group of four players tied for equal seventh at seven strokes back.

With temperatures hovering around 15 degrees Celsius, Zhang Weiwei, the reigning CLPGA Tour Order of Merit champion, got her round off to a strong start with a birdie at the first hole. She quickly gave that back with a bogey at the 190-yard third hole. More birdies would come at the eighth and 14th holes before she posted a late bogey five at the 380-yard 16th hole.

“Those conditions were totally different from when I won here last year; the greens are really firm. You must choose the right landing area on the greens,” said the Hubei native who won last year’s event by three strokes when it was played as the Le Coq Sportif Beijing Ladies Classic.

“Today was a good day for me. I enjoyed my game. I need to putt a little harder on some holes, but under par in such conditions is really impressive. It shows where I am now. Tomorrow, I also want to have fun out there.”

Liu Wenbo, a 19-year-old Beijinger, began her round with eight consecutive pars. She then posted consecutive bogeys starting at the ninth hole before dropping another stroke at the 12th. After driving the green and picking up her first birdie at the 317-yard 13th hole, she followed that with a bogey six at the next. Two late birdies at the 16th hole and at the last maintained her share of the lead. 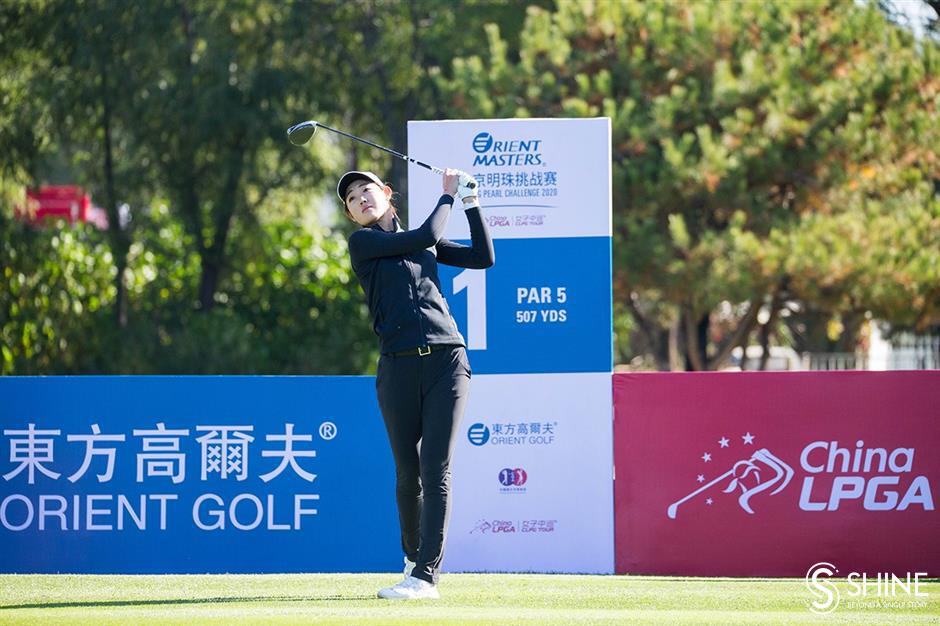 Liu Wenbo tees off at the first hole during the second round of the Beijing Pearl Challenge on Thursday.

“I didn’t play well out of the gate. The pin positions seemed a little bit more difficult than yesterday. You had to handle the wind out there. I didn’t like my putter, either,” said the third-year pro who won on the CLPGA Tour in 2017 as an amateur.

“But on the whole I am in a good position to win for the first time as a pro. This is my goal since I turned pro (in 2018). I believe the pin positions might be easier tomorrow so I could be more aggressive.”

Zhang Jingwen, another third-year pro, put herself in contention for her first top-10 finish on Thursday with a steady performance that included two birdies and three bogeys.

“My coach told me that I shouldn’t have any expectations. I did what he said and it worked very well. I have changed my swing and I believed in it and had another steady round,” said the 19-year-old from Zhengzhou, Henan Province.

“My game might not be enough to win on the Tour so I won’t think too much about it. I will just try to play my game without any expectations in the final round.”

Feng Shuangshuang was the top amateur as the teenager improved by 10 strokes over Wednesday to post a 1-over 73 to sit equal 18th at 12 strokes back.