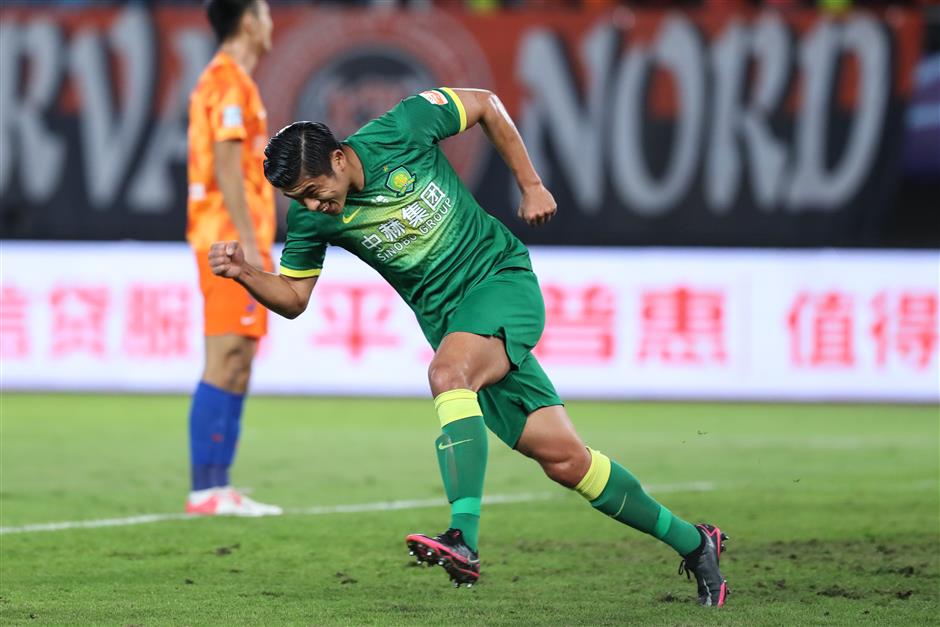 Zhang Yuning scored twice as Beijing Guoan came from behind to defeat Shandong Luneng 2-1 on Thursday and advance to the Chinese Super League playoff semifinals while Rafael Benitez's Dalian Pro secured its top flight status for next season.

Zhang’s brace earned Beijing a 4-3 aggregate win over Shandong in Suzhou, eastern Jiangsu Province, following a 2-2 draw in the first leg at the weekend and Bruno Genesio’s side will now take on champion Guangzhou Evergrande in the next round.

Brazilian striker Moises had given Shandong the lead in the 15th minute only for Zhang to equalize four minutes later when he swept home Cedric Bakambu’s low cross from inside the 6-yard box.

Zhang then earned Beijing the win 15 minutes from time when he slotted home on the turn after Renato Augusto was gifted possession deep inside the Shandong half before feeding the former West Bromwich Albion forward.

Beijing will take on Guangzhou over two legs, with the first to be played on October 28 before the return four days later.

Earlier in the day, Benitez’s Dalian Pro guaranteed its place in next year's CSL as goals from Lin Liangming and Wang Yaopeng earned the Spaniard’s team a 2-1 aggregate win over Shijiazhuang Ever Bright.

Dalian had trailed 0-1 from last week’s first leg, but Lin leveled the aggregate score when he headed home Sam Larsson’s 21st-minute corner and Wang claimed the decisive second just before halftime with a looping header.

The win means Dalian cannot finish any lower than 12th in the 16-team division while Shijiazhuang remains in relegation trouble, with the bottom two finishers dropping into China League One next season.

Benitez, a former Liverpool and Real Madrid boss, breathed a sigh of relief.

"In this difficult situation, in this difficult year, we achieved something that was important for the young players and for the Wanda (Dalian owners) project, to stay in the Chinese Super League," said the 60-year-old Spaniard.

Elsewhere, Shanghai SIPG may lose goalkeeper Yan Junling for the rest of the CSL season after the club said the China international needs eye surgery.

Yan was injured in the first half of his team’s 0-0 draw with cross-city rival Shanghai Greenland Shenhua at the weekend and the 29-year-old was examined by eye experts on Tuesday.

Yan, who was replaced by Chen Wei on Sunday, will definitely miss the second leg of SIPG’s CSL playoff quarterfinal on Friday and will also be a doubt for the AFC Champions League when it resumes in Doha, Qatar, on November 18.