Yin Xiaowen in action during the second round of the Zhangjiagang Shuangshan Challenge on Zhangjiagang Island, east China's Jiangsu Province, on Thursday.

Yin Xiaowen continued to impress against a pro field at the Zhangjiagang Shuangshan Challenge on Thursday as the 15-year-old amateur carded a 3-under-par 69 to maintain her two-stroke lead through two rounds in Jiangsu Province.

Zhang Yue, another amateur, was alone in second as the 19-year-old also shot 69 to keep within striking distance at Zhangjiagang Shuangshan Golf Club. Veteran Liu Yan (72) was the top professional at five strokes off the pace in third, one stroke ahead of Pan Yanhong (73), Li Jiayun (71) and Wang Xinying (72).

With the weather overcast and little wind, Yin got off to a good start with a birdie three at the 366-yard opening hole to get to 5 under. She then went on to card three more birdies and a bogey five at the 405-yard 11th hole.

“I played normal and made no big errors today. I didn't think about whether I would win the championship but rather just wanting to play every shot well,” said the Guangdong-based high-school student, currently 84th in the World Amateur Golf Rankings.

“Zhang Yue is a good player and we have played together lots of times in amateur tournaments. I hope we can all play well and get good scores.”

Zhang, who won the China Hainan Junior Golf Classic earlier this month for her second amateur title of the year, had a round that featured five birdies and two bogeys, including one at the 531-yard last. 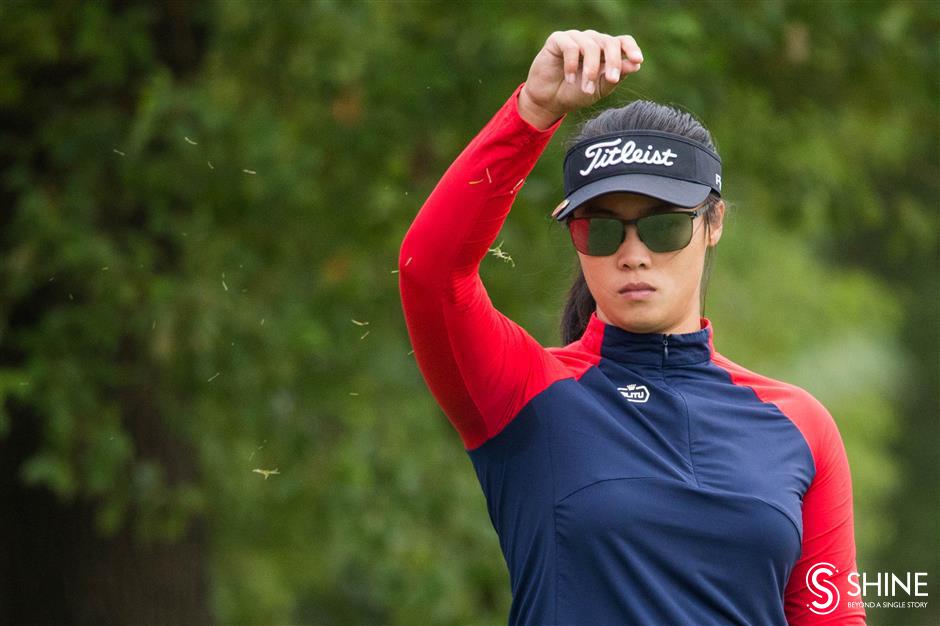 Zhang Yue prepares to play a shot during the second round of the Zhangjiagang Shuangshan Challenge on Thursday.

“I played better than the last round, but I missed several opportunities to make birdie or par when I could have. My only regret is that I made a three-putt on the last hole,” said the Haikou native.

“Yin Xiaowen and I were in the leading group together in the final round of the 2018 Zhangjiagang Shuangshan Challenge. I finished tied for third and she was tied for 56th (after shooting 89), so I think we must all be more careful tomorrow.”

Liu, currently fourth in the CLPGA Order of Merit standings, improved by two strokes today with a round that featured five birdies, including three straight from the seventh hole, and three bogeys.

“Now I feel a lot of pressure because the two amateurs ahead of me are very strong, especially Yin Xiaowen. She has won several amateur competitions this year. I am a professional golfer, if I lose I'll feel a bit ashamed.”

Notable scores saw Zhang Weiwei, the reigning CLPGA Tour Order of Merit champion, struggle to a 75 to fall eight shots back, while super rookie Yin Ruoning, winner of the first three tournaments this year, improved to a 71 in equal 13th.

Yang got her second career ace, her first as a pro, when her ball found the hole with a six-iron at the 155-yard 15th hole at the Nelson & Haworth-designed course.