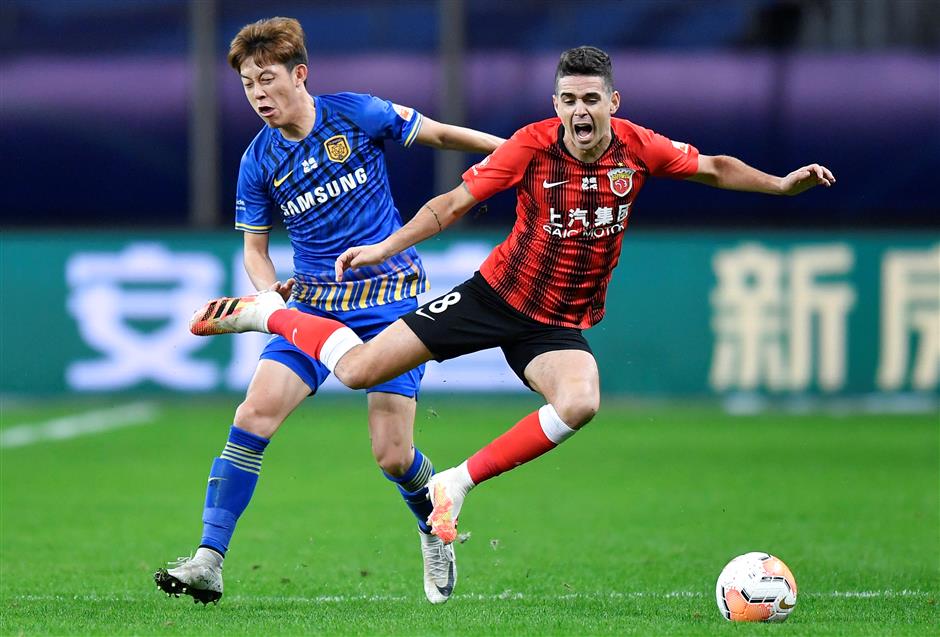 Ten-man Shanghai SIPG was rescued by a freak own goal from Jiangsu Suning defender Zhang Cheng as the former champion salvaged a 1-1 draw in the first leg of its Chinese Super League semifinal playoff on Thursday.

Zhang deflected the ball into his own net when a shot hit his face late on to gift SIPG a draw after Alex Teixeira gave Cosmin Olaroiu's host a second-half lead. Shanghai midfielder Mirahmetjan Muzepper was sent off 21 minutes from time.

The overall winner of the tie will face reigning champion Guangzhou Evergrande or Beijing Guoan in the final next month. The pair drew 0-0 in their first leg on Wednesday.

Jiangsu looked set to take a lead into the return meeting with Shanghai next week after creating the better chances in the opening encounter at the Suzhou Olympic Sports Center Stadium.

Teixeira and Eder Martins came close to scoring in the first half but linked up to give Jiangsu the lead in the 55th minute.

Muzepper then saw red with a reckless two-footed lunge on Wu Xi but Jiangsu failed to make the numerical advantage count.

SIPG pulled level with nine minutes remaining when Wang Shenchao's cross from the right was mis-hit by Lu Wenjun only for his shot to cannon off Zhang’s face and fly into the goal.

Earlier on Thursday, Wuhan Zall secured a 2-1 advantage over Qingdao Huanghai in the relegation playoffs ahead of their return meeting on Monday.

Jean Kouassi gave Wuhan the lead after eight minutes and Daniel Carrico doubled the lead in the 58th before Qingdao's Gao Xang was sent off six minutes later for a foul on Zhou Tong.

However, Romain Alessandrini scored with a spectacular curling free kick 17 minutes from time to halve the deficit and give Qingdao hope ahead of the second leg.