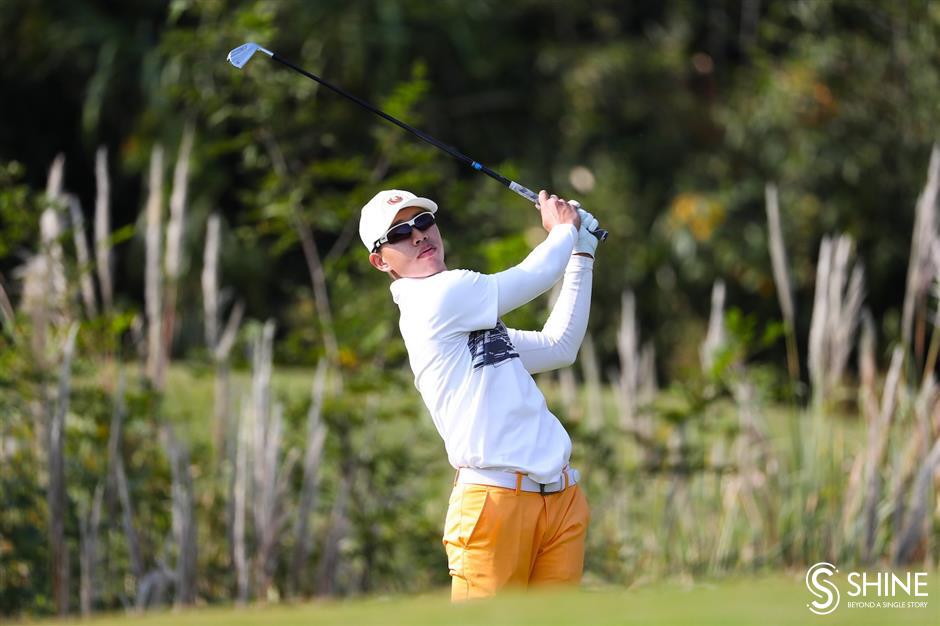 Guan Tianliang in action during the opening round of the Hangzhou International Championships at Moganshan Gowin Golf Club in Hangzhou, Zhejiang Province, on Wednesday.

Guan Tianlang did not disappoint in his pro debut on Wednesday as the Guangzhou native opened with a round of 6-under-par 66 for a one-shot lead at the Hangzhou International Championships in Zheijiang Province.

China LPGA Tour regular Zhang Jienalin holed out from 76 yards for an eagle two on her last hole, the ninth hole at Moganshan Gowin Golf Club, for a 67 and second place at the 1.2-million yuan (US$180,000) tournament, a co-sponsored event with the China Tour.

Guan, who gained worldwide fame as a 14-year-old when he made the cut at the 2013 Masters and finished 58th at Augusta, took the opening-round lead on the strength of six birdies and a lone birdie. He finished strongly with consecutive birdies starting from the 17th where he hit a pitching wedge to four feet and converted. At the last, he sank at 10-foot putt after making three iron shots to the green.

“I didn’t feel any different from my amateur time. Actually, my physical condition hasn’t been very well for the last few days, but I could make putts today and had a good score,” said the 22-year-old who dropped out of the University of Arizona after playing for the school’s golf team since 2017.

“I tried to play steady, more steady than the two girls in my group. But I could convert birdie chances, which was good. I give myself 90 out of 100. I could be better. I lost a bit focus on the last few holes and missed a couple of chances.”

In the 72-hole stroke-play event, the 78 men and women in the no-cut field, which includes six amateurs, go head-to-head on the same course. The players compete for one prize purse and one trophy but from two different sets of tees. There are two events (men and women) as far as World Ranking Points are concerned, but their earnings will be decided by where he or she finishes in the mixed event.

Zhang carded a round that featured four birdies, a bogey and the eagle two at the 333-yard ninth. She was playing in a group that included amateurs Chen Siyan (74) and Chen Peicheng (72), the Beijing teenager who made the winning point at last month’s Sina Cup when he beat pro Fan Shiyu 5&4 in the singles. 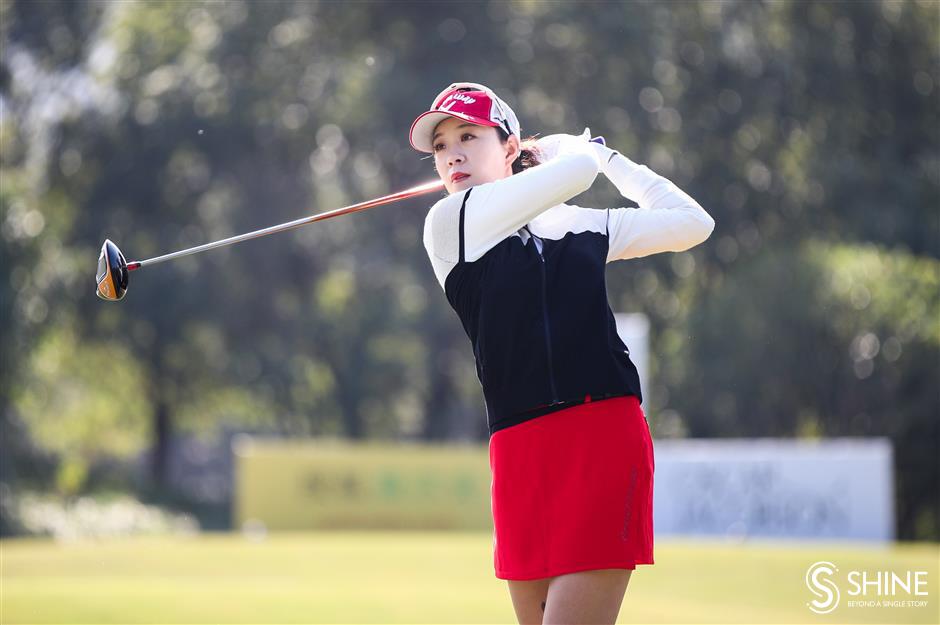 Zhang Jienalin plays a shot during the first round of the angzhou International Championships. She fired a 5-under-par 67 to sit one-shot behind leader Guan Tianliang.

“I had two great partners today. They started very well and had a good rhythm like me. At the last three holes I made a bet with Chen, my Sina Cup teammate; the loser would do 10 push-ups for every birdie. I feel great that I beat him and also had a good round.”

Starting his day from the back nine, Wu, who was also making his pro debut, made it look easy through his first 17 holes as he carded eight birdies and a lone bogey to take the lead. It all unravelled at his last hole, the ninth, where he four-putted to drop out of first place.

“I played great until the last hole. I’m young, still a rookie. Many cameramen were around me at the last hole. I felt nervous and couldn’t calm down, so I missed two putts from within three feet,” said the 19-year-old from Fujian Province.

“But this score is a lot better than I expected. One-under is a great score for me. I was in a group with two girls. I thought I couldn’t have a bad score and lose face.”

Notable scores included super rookie Yin Ruoning, a three-time winner on the CLPGA Tour this year, opening with a 69 to sit equal eighth in group that included Yin Xiaowen, the 15-year-old amateur who won last week’s Zhangjiagang Shuangshan Challenge. Ye Wocheng, another making his pro debut, was a shot further back on 70.

Defending champion Zhang Weiwei, the reigning CLPGA Tour Order of Merit title holder, opened with a 71, while Chao Haiming, the defending men’s champion, was on even-par 72.

﻿
Special Reports
ADVERTISEMENT
Honor releases first products since Huawei spinoff
Forum calls for more creativity to drive tech innovation
'Meet The Bund' for a Michelin star journey
Let an umbrella be your smile! A town with plenty to be happy about
Boys vs girls: It's hard to shake old ideas
Ever-evolving trends in cuisines and wines
How to tell opinion from fact: Do you live in a world of two realities?
Animal adoption as of January 24
Ordination terrace stands strong as a symbol of Buddhist faith
Cong's Kitchen brings out nostalgic local flavors
EXPLORE SHINE