A birdie four on the final hole proved the difference for Zhang Jienalin on Saturday as the China LPGA Tour veteran earned her first pro win with a one-stroke victory at the Hangzhou International Championship.

Super rookie Yin Ruoning carded a 5-under 67 to finish equal second with Zhang Yunjie (68), while Ren Yue (69) and overnight leader Liu Yiyi (74) were two shots off the pace in equal fourth. Liu Wenbo (69) was a shot further back as CLPGA Tour players occupied the top-six places on the leaderboard in the mixed field.

Ye Jianfeng (72) was the top male player, tied for equal seventh with 15-year-old amateur Yin Xiaowen (72), at four strokes back.

After starting the day one shot back of Liu, Zhang Jienalin quickly found trouble when she made a bogey four at the 157-yard second hole to drop to 8-under. A birdie three at the 326-yard seventh allowed her to escape the front nine on even-par. On the back nine, a birdie three at the 373-yard 14th was followed by a clutch 30-foot putt at the next to save bogey.

With Yin and Zhang Yunjie in the clubhouse at 9-under, Zhang Jienalin avoided a playoff by safely finding the 18th green in three shots and then sinking a 10-footer for birdie for the win.

“I had thought that I would have a surreal feeling winning my first professional tournament. But now I just thought ‘that’s it.’ I’m not very excited, I just did it. I did a great job, no heart racing, nothing more,” said Zhang Jienalin.

“This result is not as I anticipated. I thought the boys would win this, but the leaderboard would be full of girls. The boys could play aggressive and have some really low scores, but the girls are really good and steady. I’m happy the winner is me at the end of the day.” 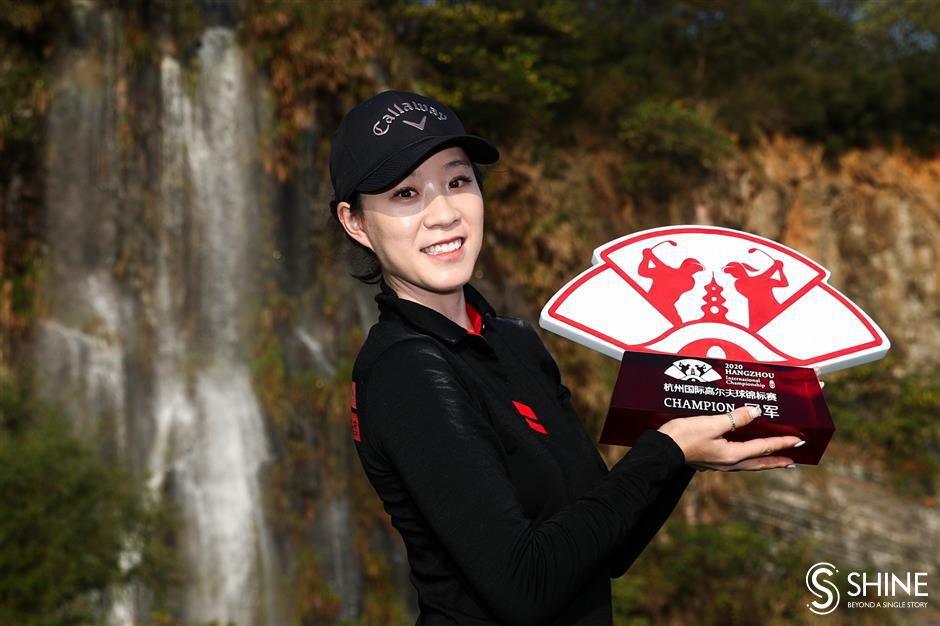 Zhang Jienalin poses with the Hangzhou International Championshiptrophy after her one-stroke victory at Moganshan Gowin Golf Club in Hangzhou, Zhejiang Province, on Saturday.

Yin, who won the first three legs of the CLPGA Tour season, made a strong bid for a fourth title. Her late charge included seven birdies, four of which came over the last six holes, and two bogeys.

“I made some long birdie putts on No. 1, No. 3, No. 14 and No. 15, more than 25 feet. But I feel disappointed now. I also missed a couple of short birdie putts,” said the Shanghai teenager. “But it’s still a good sign that I’m better and better. Maybe next time I can win again.”

After starting the day five shots back, Zhang Yunjie quickly got into the mix with birdies on the first two holes. She then made bogey at the next, one of three she would make on the day, along with four more birdies, including a 25-foot putt that found the hole at the last.

“I watched the leaderboard at the 15th hole where I was one shot behind. I wanted to make two more birdies down the stretch. My putting was good until then,” said the 22-year-old Hainan native. “I regret I missed a couple of make-able birdies on the next two holes. Then I made a bogey at the 17th hole.”

Notable scores included defending women’s champion Zhang Weiwei (74) in equal 10th, while her male counterpart, Chao Haimeng, was equal 17th after a round of 72.

Chen Peicheng (73) was the top male amateur. He was in a group of six players tied for 27th at 3-over that included Guan Tianlang, the first-round leader who was making his pro debut. The Guangzhou native ballooned to an 81 following a disastrous back nine where he was 11-over. Ye Wocheng (76), who was also making his first appearance as a pro, tied for 33rd.