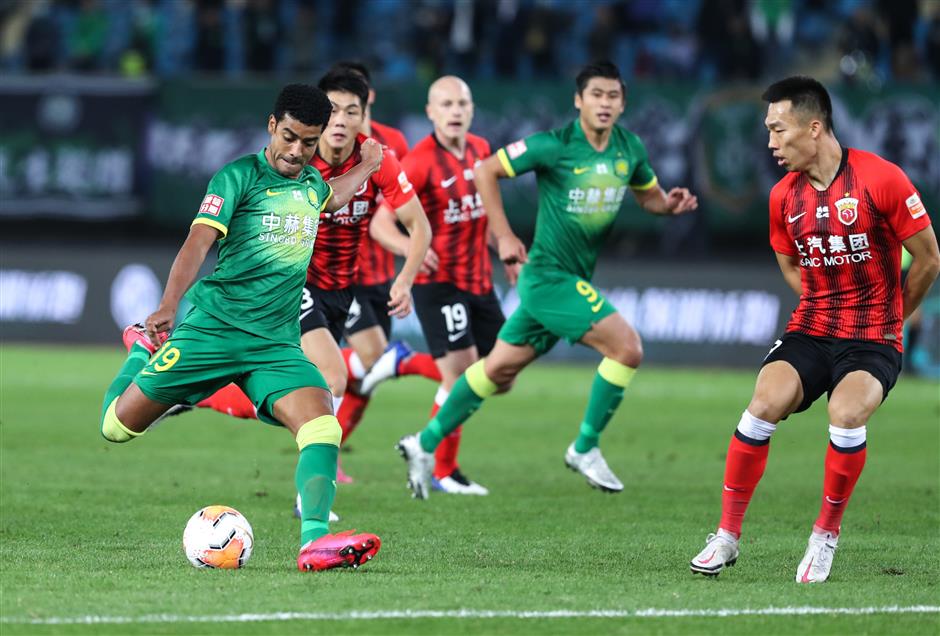 Beijing Guoan's Alan Carvalho scores against Shanghai SIPG during the second leg of their Chinese Super League third-place playoff in Suzhou, Jiangsu Province, on Wednesday. The match ended 1-1, with Beijing winning 3-2 on aggregate.

Beijing Guoan claimed third place in the Chinese Super League by completing a 3-2 aggregate win over 2018 champion Shanghai SIPG in a playoff on Wednesday, ensuring its participation in next year’s AFC Champions League.

Alan Carvalho’s first-half goal extended the lead for Bruno Genesio’s side after Beijing had won the first leg 2-1 on Saturday, although an equalizer by Ricardo Lopes two minutes into the second half left the outcome in the balance in Suzhou.

SIPG’s Hulk hit the post just before the hour mark and Marko Arnautovic was spectacularly denied by goalkeeper Hou Sen in stoppage time as Vitor Pereira’s side sought to level the scores on aggregate, but Shanghai ultimately fell short.

SIPG still retain hopes of qualifying for next year’s continental club championship when it features in the Chinese FA Cup. The winner of that competition also qualifies for the ACL.

Earlier, Wuhan Zall defeated Shijiazhuang Ever Bright thanks to two goals from Jean Kouassi to send Afshin Ghotbi’s side down to China League One next season.

The win means Wuhan will now face Zhejiang Greentown, runner-up in the second tier, to determine the final line-up of China’s top flight next year.

The CSL title will be decided on Thursday when Fabio Cannavaro's reigning champion Guangzhou Evergrande faces Jiangsu Suning in the second leg of the championship final. The first leg was 0-0.

The CSL started in July, five months late and in two secure "bubbles" in Dalian, northeastern Liaoning Province and Suzhou, neighboring Jiangsu Province, because of the coronavirus. 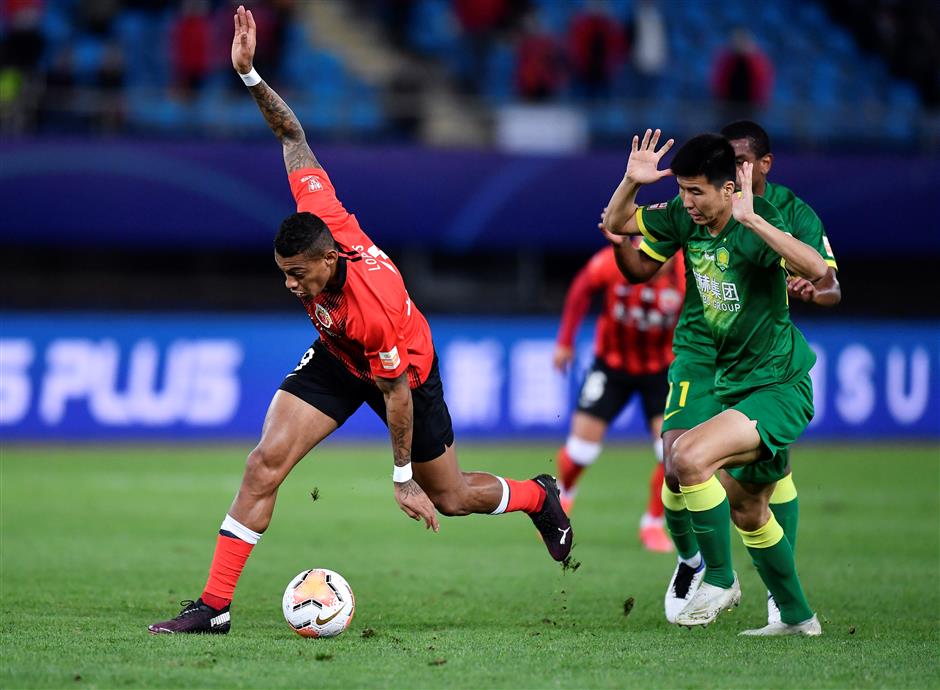 Meanwhile, Rafael Benitez took aim at the revamped CSL, saying that it made "no sense", but the revered Spanish coach is already planning for another season with Dalian Pro.

The former Liverpool and Real Madrid manager concluded a difficult campaign with a 0-4 defeat as Dalian finished 12th of 16 teams in the CSL.

"This season, with the format of the competition, it doesn't matter where you finish, so it's just so strange that I don't care," the 60-year-old, who guided Liverpool to UEFA Champions League glory in 2005, said, referring to Dalian's final league spot.

Benitez took over at Dalian in July last year and reportedly has a contract worth 12-million pounds (US$16 million) a year after tax until December 2021.

That would mean another campaign in China and despite frequent reports of interest from the English Premier League, Benitez appears set to stay put.

"It's just a season that you have to finish... and we have to start thinking of the next one because this one was very, very special, very strange, and you can't evaluate and you can't consider anything because the format of the competition was totally different from a normal one," he said.

A young Dalian squad won five of its 20 matches and ended the CSL with a 3-4 aggregate defeat to Giovanni van Bronckhorst's Guangzhou R&F on Tuesday.

After the first phase, teams went into a knockout-style competition over two legs to determine league placings, including who wins the title and who is relegated.

It means that even though Tianjin Teda failed to win in 14 games in the first phase, a 3-1 aggregate victory over Jordi Cruyff's Shenzhen FC in the second stage was enough to secure survival.

In contrast, Shijiazhuang Ever Bright was relegated, despite winning five matches this season.

"Maybe someone can explain how Teda, winning one game, was safe, and Ever Bright, winning five games but still playing for relegation," said an unimpressed Benitez.