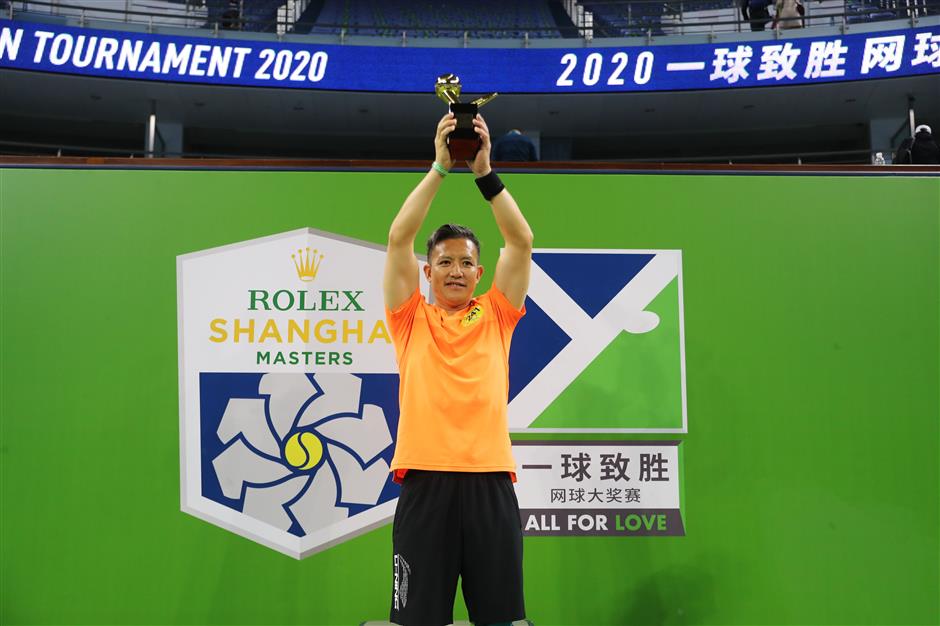 Guo Yimin from Shanghai became the champion of the inaugural One-Point-Win tournament at Qizhong Tennis Center in Minhang District on Sunday.

The inaugural One-Point-Win Tournament dropped curtain at Minhang’s Qizhong Tennis Center on Sunday. The amateur tournament, where every point is a match point, was a replacement for this year’s Rolex Shanghai (Tennis) Masters which was cancelled amid the coronavirus.

The three-day event set entries for 512 amateur players from around the country. They were paired randomly for one-point matches and winners advanced to the next round. Guo Yimin from Shanghai beat Hebei’s Shen Yizhicong in the final to pocket the 1-million yuan (US$147,000) prize money.

“I really didn’t expect to become the champion,” said the 49-year-old Guo, who played a total of nine matches – or nine points – en route to his crown. “I have been in a relaxed form as my purpose was simple – to try my luck in a brand new tournament and enjoy the fun of tennis.”

Male and female players were mixed in the tournament, though female players had the privilege to choose whether to serve or receive when taking on a male player. All participants were required to take nucleic acid tests, including some 20 foreign residents of Shanghai, to ensure they are clear of COVID-19.

“Though losing an easy ball is disappointing, it doesn’t take away the fact that this is an exciting tournament,” said Matthias Koeppen from Germany, who failed in the second round. “You feel that you are an ATP player here, going through all procedures professional players do. I also made some new local friends.”

All matches were played on the venue’s center court, which was a major attraction for a lot of participants.

“I used to come to Qizhong every October for the Shanghai Masters, but never thought that I would have the chance to play on center court, not to mention with cameras, spectators and all,” another amateur player Wang Xiang told Shanghai Daily. 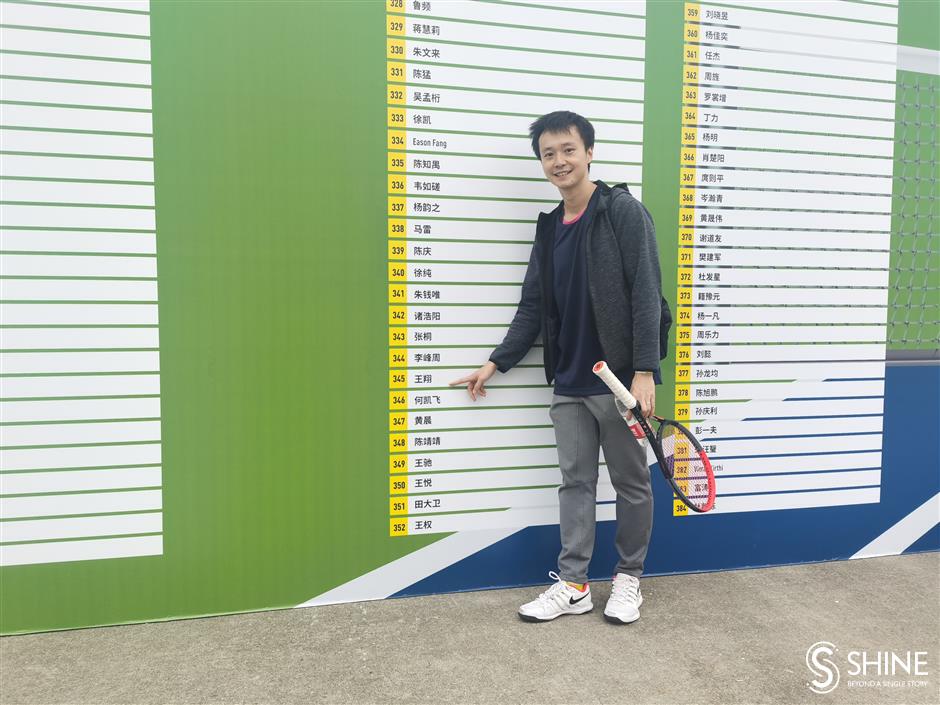 Shanghai player Wang Xiang points out his name on the entry list of the amateur tournament.

“The center court is much bigger than the normal courts I have played on. The spacing is all different. There is more ground to cover and I needed to adjust the hitting points, too.”

Wang went through the three rounds to enter the last-64 before failing in the fourth round on Sunday.

“It’s a very different challenge since you play only one point for each match,” he added. “My expectation was to play one point here. Instead, I played four rounds, so it was four times the fun for me. It’s a great party where all amateur and recreational players can take part.”

According to Juss Event, which is also the organizer of the annual Rolex Shanghai Masters, One-Point-Win will become a regular tournament, serving as a warm-up for the Masters.

“What surprised me was the sportsmanship I saw here,” said Michael Luevano, tournament director for both Rolex Shanghai Masters and One-Point-Win.

“Players were all smiling no matter whether they won or lost. We were first worried that there might be some angry people (after losing) as sometimes it’s luck, not their skill, that dictates how they perform in a match. So I’m happy about it,” he said.

Tennis-themed games were arranged at Qizhong Tennis Center on the sidelines of the tournament.