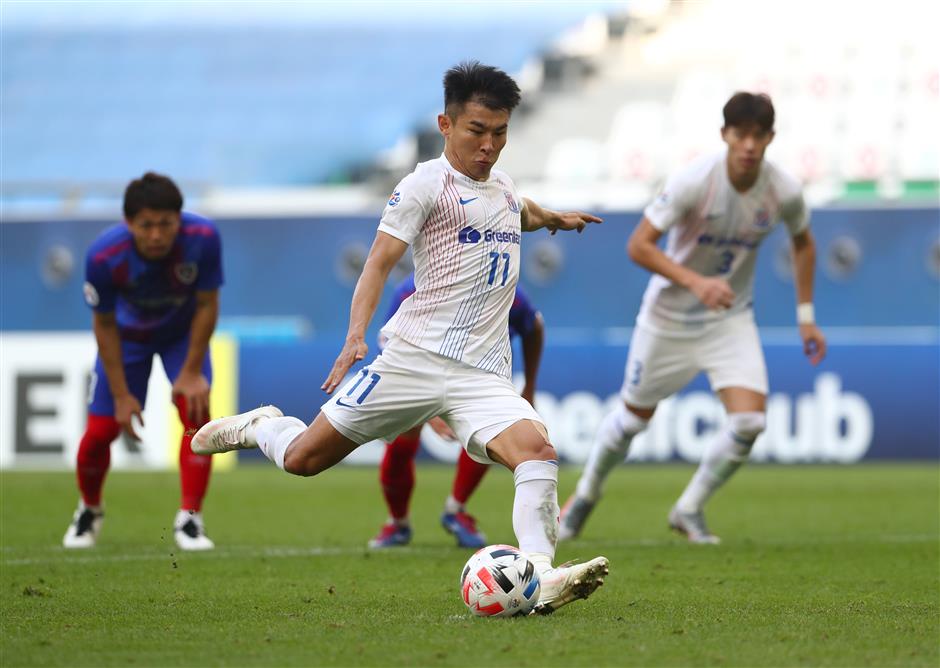 Shanghai Shenhua midfielder Yu Hanchao scores the only goal from the penalty spot against FC Tokyo during their AFC Champions League Group F match at Education City Stadium in Doha, Qatar, on Tuesday.

Beijing Guoan has one foot in the last-16 of the AFC Champions League after a convincing 3-1 win against a rusty Melbourne Victory side on Tuesday extended its perfect record in Group E to three from three.

Another Chinese side Shanghai Greenland Shenhua also improved its chances of qualification from Group F with its second win in three matches, edging past FC Tokyo 1-0, courtesy of a late penalty.

But it was Bruno Genesio’s Beijing outfit which sent out a strong warning to its rivals in the tournament by following up on its win over FC Seoul last week with another impressive performance in Doha where the tournament’s eastern zone matches are being played after a nine-month break due to the Covid-19 pandemic.

Beijing clearly looked a class above Melbourne which was largely lackluster both in attack and defense, with even the Australian side’s consolation goal late in the second half coming through a huge deflection from Kim Min-jae after substitute Gianluca Ianucci’s powerful shot from nearly 25 yards appeared heading straight into the goalkeeper’s arms.

Beijing allowed its Australian rivals only 40 percent ball possession and that worked hugely in its favour as its created chances galore at the al-Sadd Sports Club.

But once again, it was its Brazilian presence which played a pivotal role, with Renato Augusto and A Lan on target in the 22nd and 34th minutes before Wang Zimin’s brilliant goal in the 74th put the match out of Victory’s reach.

Frenchman Genesio, who has been in charge at Guoan for almost 16 months, was not in a very celebratory mood despite his team’s 100 percent win record so far.

"In the first half we played really well as we tried the high pressing we trained before the game and were successful in keeping control,” said Genesio.

"The only thing I am disappointed about is that we conceded one goal towards the end. We need to be more serious and cautious towards the end of the game."

Melbourne Victory, for whom this was its second defeat in three matches – its only win came in February against Chiangrai United – is now third in the standings and would need a Herculean comeback to qualify for the knockout phase.

"For us, It’s not the result we wanted," said Victory’s Steve Kean, whose side had no match practice for several months before heading to Doha.

“This was our very first match of any type, we did not even play any friendlies and came against a Beijing side that have played a full season.

"We wanted to win and take points but we can’t feel sorry for ourselves." 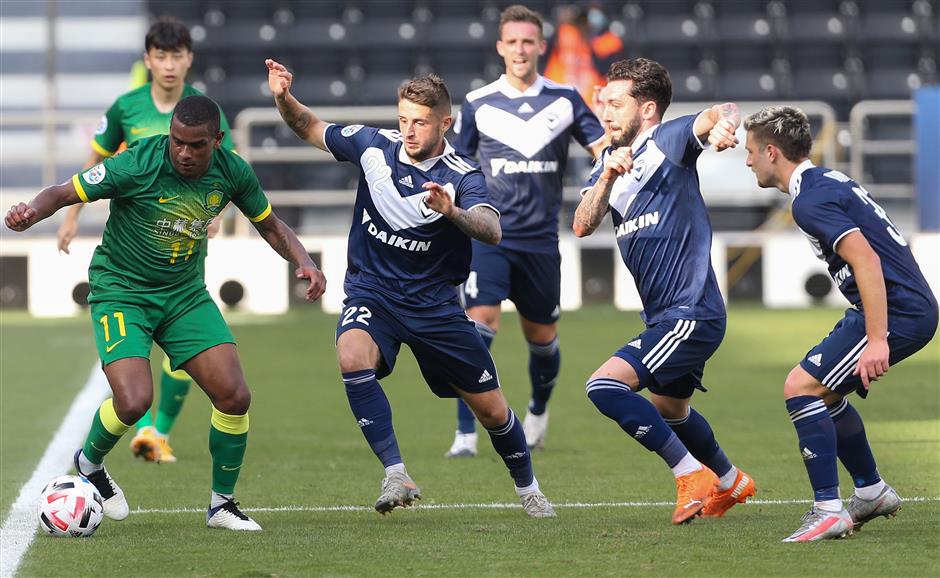 Meanwhile, Shenhua was celebrating its success over Tokyo FC after Yu Hanchao’s successful penalty in the 74th  proved the decisive moment in the match at Education City Stadium.

“Our players really overcame their difficulties of fitness and fatigue. They persisted from the first minute until the end and I thank them for that.

“They showed great mental power and spirit and I believe they will get better from here,” he added.

Tokyo’s Kenta Hasegawa was clearly upset, although he was not losing hope yet despite his team being in third place in the standings with four points from three matches

“The result is disappointing. This was the first game in the AFC Champions League for many of our young players,” Hasegawa said.