"Jackson" He Peizhang, the only Chinese-born player in major college American football, completed an amazing sport journey by scoring a touchdown for Arizona State in a victory over arch-rival Arizona.

He was mobbed in joyful celebration by his Sun Devils teammates after scoring their final touchdown on Friday night in a 70-7 road romp on an impressive one-on-one effort, forcing his way into the end zone while in the grip of a defender.

The reserve running back originally from Shaoguan, south China's Guangdong Province, ran four times for seven yards and made history with his scoring effort, although he heaped praise upon his "Great Wall" blockers.

"I don't know what to say," He told ESPN. "It's not me. It's all the linemen in front of me. I call them 'The Great Wall' because they protect me and I just got in."

He, whose name on the back of his jersey is spelled out in Mandarin rather than English, ran around left end and into a defender at the 1-yard line, then overpowered his way across the goal line for the touchdown.

In recalling his journey from China to United States gridiron acclaim, the 5-foot-9, 220-pound running back noted how he adored the sport from the start and that helped him overcome language, culture and American football knowledge barriers.

"I was like, 'Oh man I love this sport,'" He said in a video on the university website.

"When you have a passion for something, it overcomes your fears, because it's something you like. I had the mentality of breaking all the barriers in my life." 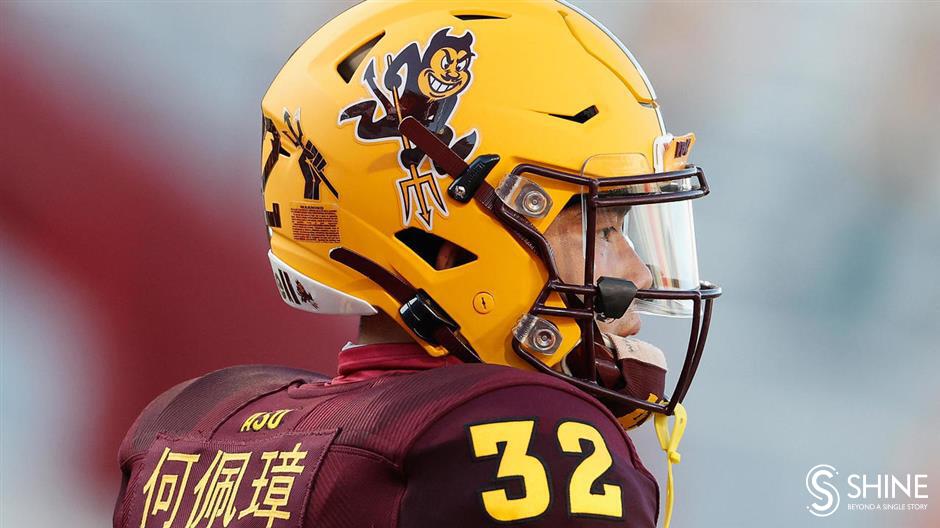 He's parents sent him to San Diego to attend high school, where he began playing American football five years ago.

He selected a new name for his American adventure and since he enjoyed the music of Michael Jackson, Jackson He was born.

After the parent of a future teammate suggested he should play, He became an offensive lineman at Lutheran High, slowly solved the language barrier and after a stint at a small college in chilly North Dakota, decided to attend Arizona State.

The team needed players on its scout squad, a unit that tries to play as the next week's opponent would play, so He found his way into the program.

The reward for his efforts was his starring role late in the Sun Devils' latest triumph.

"You really have to be open for everything," He said of his US football journey. "When you are open for something, you get something back."