As with everything else, the coronavirus outbreak has had a massive impact on sports as well. With the pandemic spreading wildly across the globe, major international sporting events were delayed or canceled or played out at empty stadiums.

Amid the gloom, there were reasons to celebrate with team and individual achievements, and, like always, some heartbreaking moments. We pick the top 10 sports stories of the year that defied the odds.

The postponement of the 2020 Tokyo Olympic Games, the EURO 2020 and the FIFA Club World Cup

The International Olympic Committee and Tokyo organizers decided at the end of March that the 2020 summer games will be postponed to July 23-August 8, 2021, but retain its name “Tokyo 2020.” It was the first time in IOC’s 124-year history that the Games was delayed. 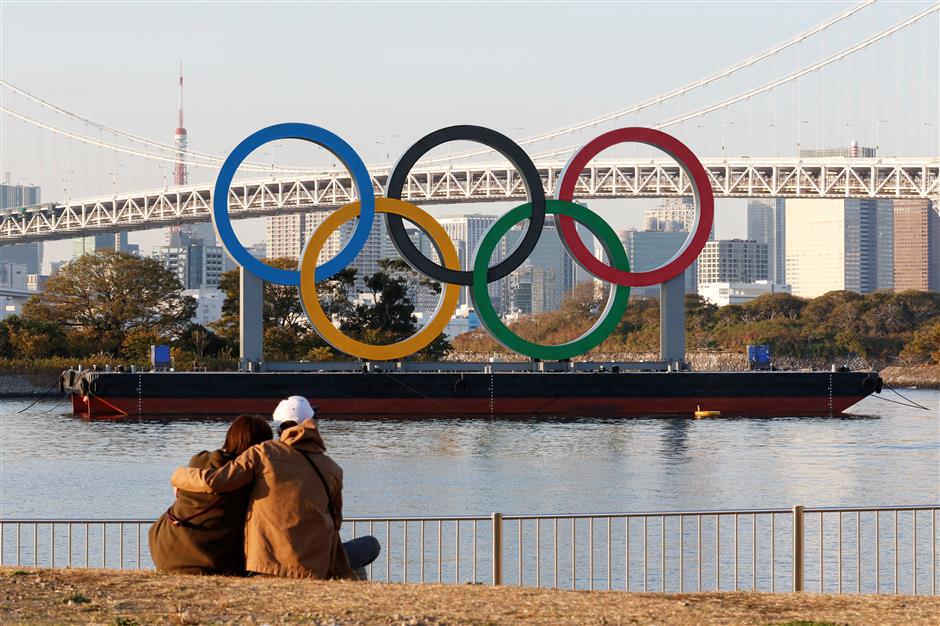 The European continental tournament UEFA EURO 2020 has been earmarked to take place from June 11 to July 11, 2021. Twenty-four teams will play across 12 cities in Europe. It would still be known as “EURO 2020.”

The 2020 Copa America, which was originally scheduled to take place from June 12 to July 12 this year, has been postponed for a year too.

This year’s FIFA Club World Cup will be played from February 1 to 11, 2021 in Doha, Qatar. China is the host country for 2021, but no dates have been set for the new expanded 24-team 2021 Club World Cup. China was originally scheduled to host the tournament in June or July.

The death of sporting legends Kobe Bryant and Diego Maradona

Kobe Bryant, who won five NBA championships with the Los Angeles Lakers, was killed in a helicopter crash in California on January 26. He was 41. His 13-year-old daughter Gianna was with him on the ill-fated chopper. As fans grieved around the world, the NBA announced that the All-Star Game MVP award will be renamed the Kobe Bryant Award. 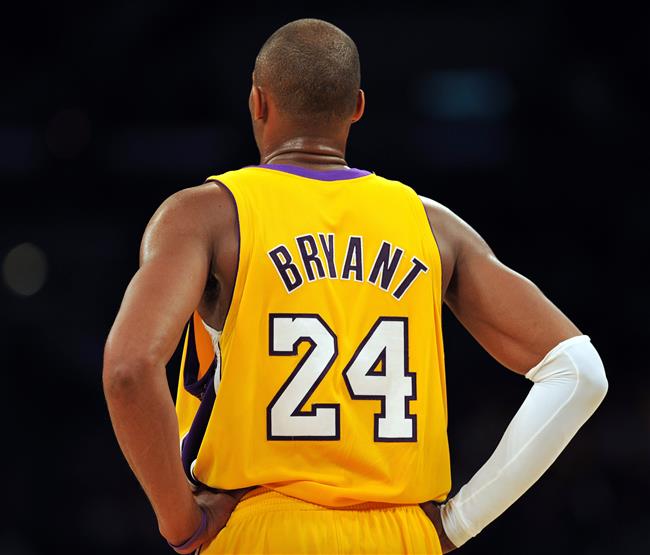 Argentina soccer legend Diego Maradona died of a heart attack at his home in Buenos Aires on November 25 at the age of 60. Argentina declared three days of national mourning for the exceptionally talented but controversial star.

One of the most gifted soccer players in history, Maradona’s pinnacle of glory came when he captained Argentina to World Cup title in 1986. He was, however, booted out of the 1994 World Cup for failing a doping test. He had battled health issues and underwent emergency surgery for a subdural haematoma just weeks before his death. 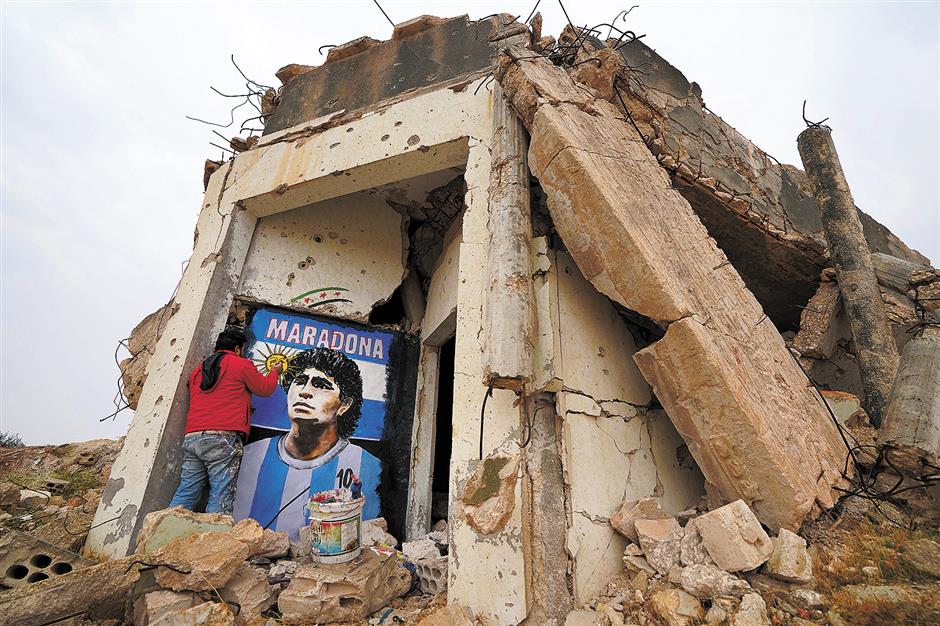 Syrian painter Aziz Asmar draws on the wall of a destroyed home a portrait of Diego Maradona on November 26, one day after the Argentine football legend passed away.

Chinese badminton world champion “Super Dan” Lin Dan announced his retirement on social media on July 4, ending his illustrious 20-year career with the national team. “At 37, my physical condition and injuries no longer allow me to fight alongside my teammates,” said the two-time Olympic gold medalist and five-time world champion. Tokyo would have been his fifth Olympic Games.

China’s world silver-medalist high jumper Zhang Guowei, known for his flamboyant twerking celebrations, also announced his retirement at the age of 28. Zhang was suspended in March last year for an undisclosed amount of time for breaking Chinese athletics’ strict rules on commercial activities. He did not manage to find his best form again after returning to the national team.

Wu Lei tests positive for COVID-19, so do Cristiano Ronaldo and Novak Djokovic

China’s star soccer striker Wu Lei tested positive for COVID-19 on March 21. The 28-year-old, who plays for the La Liga side Espanyol, is the only Chinese player to play his trade in the top five major European leagues. He self-isolated at his home in Barcelona with his wife, who also tested positive. Wu was back on May 10 after twice testing negative for the virus.

Top-ranked tennis player Djokovic tested positive for COVID-19 in June at his charity tournament Adria Tour in Croatia and Serbia. The Serbian apologized that the tournament “caused harm.” He returned to training in July.

Portuguese soccer federation said on October 13 that Ronaldo tested positive for COVID-19 though he showed no symptoms. The 35-year-old tested negative for the virus at the end of October and has been banging in goals since his return to Italian Serie A for his club Juventus.

Playing in an empty stadium

International leagues and tournaments interrupted due to the coronavirus resumed gradually, but without audiences. The 2020 Chinese Super League changed its format and gathered teams in the two cities of Suzhou and Dalian for competitions which started on July 25. Jiangsu Suning won the league this year. Guangzhou Evergrande finished second followed by Beijing Guo’an and Shanghai SIPG. Greenland Shanghai Shenhua finished seventh. 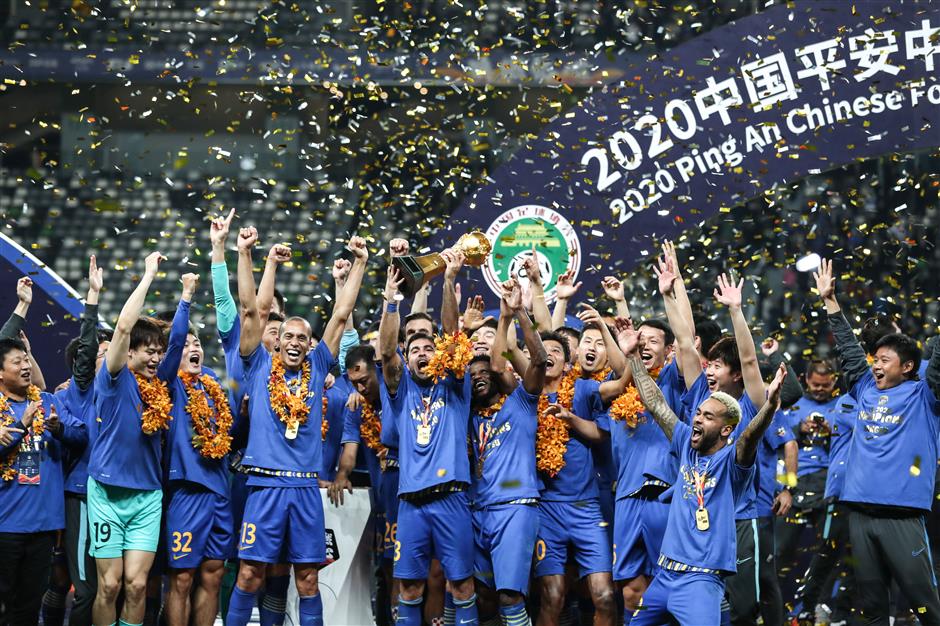 Liverpool back on perch

Rafael Nadal clinched his 20th Grand Slam title at the French Open final on October 11, overcoming Novak Djokovic in three sets to tie himself with Roger Federer for the most ever Grand Slam titles.

Lewis Hamilton equals Michael Schumacher’s record of seven world titles. To win Formula One drivers’ championship at Istanbul Park on November 15, the Mercedes driver needed to finish ahead of teammate Valtteri Bottas and did so with ease, securing a fourth successive title by winning the race after starting sixth.

The eSports 2020 League of Legends World Championship, or S10, was held in Shanghai in September-October. The final was staged at the brand-new Pudong Football Stadium on October 31. 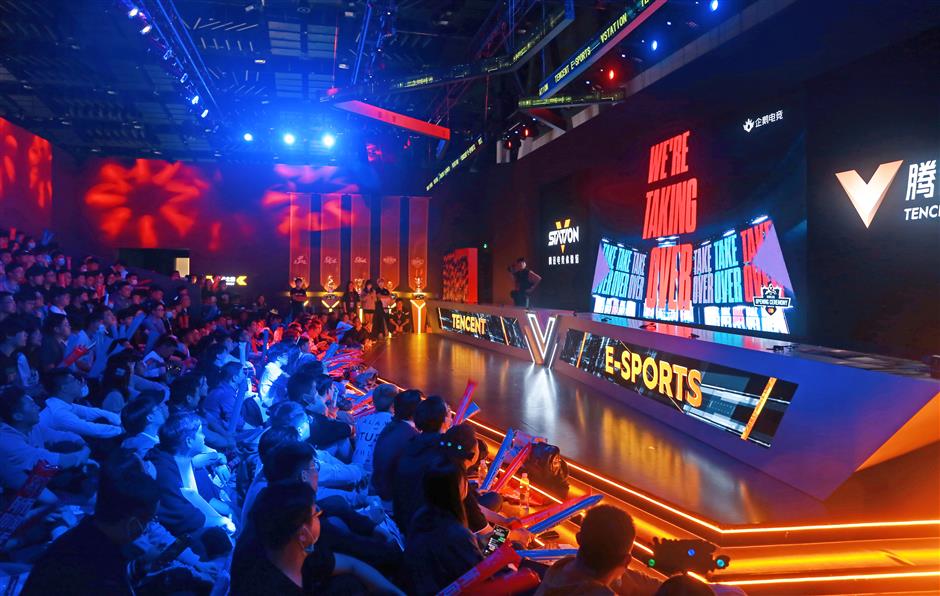 The eSports 2020 League of Legends World Championship was held in Shanghai.

Breaking, sport climbing, surfing and skateboarding have been confirmed as additional sports for the 2024 Olympic Games to be held in Paris.

﻿
Special Reports
ADVERTISEMENT
Let an umbrella be your smile! A town with plenty to be happy about
Boys vs girls: It's hard to shake old ideas
Ever-evolving trends in cuisines and wines
How to tell opinion from fact: Do you live in a world of two realities?
Animal adoption as of January 24
Ordination terrace stands strong as a symbol of Buddhist faith
Cong's Kitchen brings out nostalgic local flavors
Mural an inspiration for latest shadow puppet show
China film market a marked global triumph
Interactive plays inspire children with cognitive disorders
EXPLORE SHINE