Shanghai Port defender Wei Zhen (right) competes with Beijing Guoan midfielder Jonathan Viera during their Chinese Super League match in Suzhou, neighboring Jiangsu Province, on Wednesday. Shanghai Port won 3-1 for its second victory in as many Group B matches in the Suzhou bubble.

Slaven Bilic saw his side concede a goal after 45 seconds on Wednesday as the former West Bromwich Albion and West Ham United manager lost for a second time in as many games in China with defeat to Marko Arnautovic's Shanghai Port.

In front of nearly 5,000 fans, Bilic's Beijing Guoan was beaten 1-3 in one of the biggest fixtures in the Chinese Super League despite dominating much of the match.

The damage was done early. Brazilian striker Ricardo Lopes scored almost from the kickoff and then doubled Shanghai's lead with barely four minutes gone after a defensive mistake.

At that point, former Croatia boss Bilic must have wondered what he had let himself in for by moving to China following his sacking by West Brom in December.

When Rafael Benitez arrived in China with Dalian Pro in 2019 he said that working through a translator was one of his biggest frustrations.

The 52-year-old Bilic denied that he had a problem getting his message across to his players: "It's maybe a little bit more difficult to make a bond with a player, to do it one-on-one.

"But you have enough time, especially when you are in a 'bubble' there is no time limit to explain to the players what you want from them."

The CSL is taking place in two secure "bubbles", in Guangzhou and Suzhou, to thwart the coronavirus.

Beijing, which like Shanghai was one of the preseason favorite, was nevertheless fragile at the back in the face of Lopes, former Chelsea star Oscar and Arnautovic.

Arnautovic, who had a quiet evening, played under Bilic at West Ham in 2017 but after the latter's sacking the Austrian forward admitted that "I let him down." 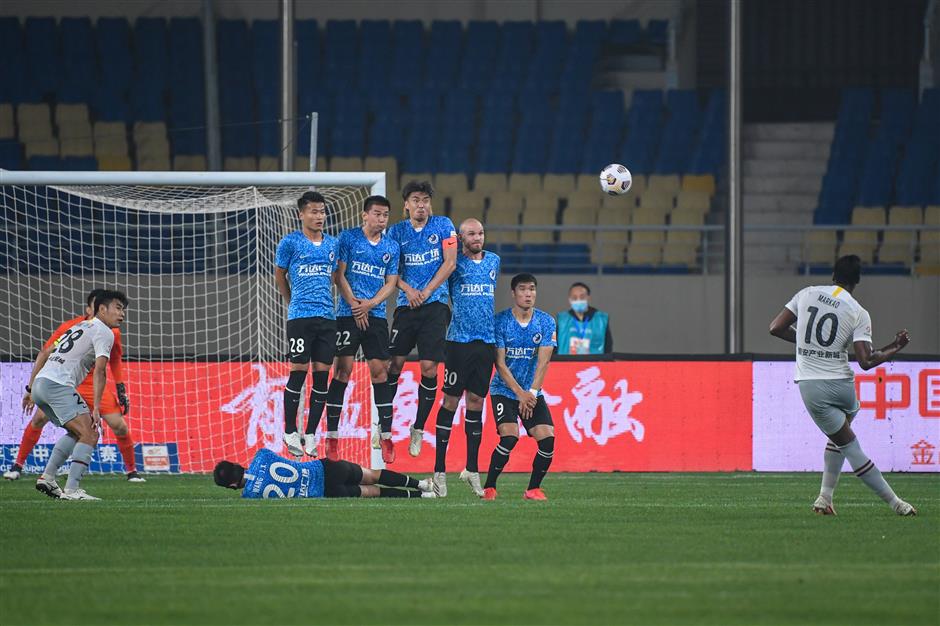 Hebei striker Marcao scores with a free kick for the only goal against Dalian Pro during their CSL match in Suzhou on Wednesday night.

There was another English Premier League old boy in Shanghai's Australian midfielder Aaron Mooy and he teed up Lopes on 45 seconds, the forward completing the move with a clever finish.

But after that torrid start, Bilic's men were the better side and they pulled a goal back to make it 2-1 in the 22nd minute through Spaniard Jonathan Viera.

They failed, however, to put away several good chances and paid the price when Lu Wenjun headed in with nine minutes left.

It is early days in the season but Shanghai, coached by another Croatian in Ivan Leko, already look like the team to beat. It won its first match 6-1, with Arnautovic hitting a hat-trick.

In the day's second match in Group B, Dalian Pro lost 0-1 to Hebei, with Marcao scoring the winner via a free kick in the 80th minute in Suzhou.

The players and staff of all 16 CSL teams are housed in hotels and cannot mix with the public or even see their families as part of measures against the virus.

However, infection rates are down to a trickle in China and fans are allowed to attend some matches. There were about 30,000 at the season-opening Guangzhou derby last week.