Gold medalist Zhang Yufei of China celebrates during the victory ceremony for the women’s 200 meters butterfly event during the 2018 Asian Games in Jakarta in this August 22, 2018, photo. Chinese media have hailed Zhang as "the new butterfly queen" after she soared at the national swimming championships.

Chinese media hailed Zhang Yufei as "the new butterfly queen" after she soared at the national swimming championships, firing a warning of intent with the Tokyo Olympics under three months away.

The 23-year-old walked off with five gold medals and a silver after the action — which doubled as Olympic trials — concluded at the weekend in the coastal city of Qingdao, eastern Shandong Province.

She clocked 2 minutes, 05.44 seconds in the women's 200 meters butterfly, easily the fastest time in the world this year, and also blitzed the rest of the field to win 100 fly and 50 freestyle gold.

"I felt exhausted in the last three days," Xinhua news agency quoted her as saying, having also taken part in relay races.

Zhang, who was a disappointing sixth in the final of the 200 fly at the Rio 2016 Games, could be China's leading light in the pool at the Tokyo Games with Sun Yang's participation in severe doubt.

Sun, a three-time Olympic gold medalist, will go before the Court of Arbitration for Sport later this month with his career hanging in the balance.

Sun was suspended for eight years by CAS in February last year for refusing to give samples during a surprise doping test where a vial of his blood was smashed with a hammer.

But Switzerland's top court overturned the ban, in a surprise decision in which it said CAS was guilty of bias. 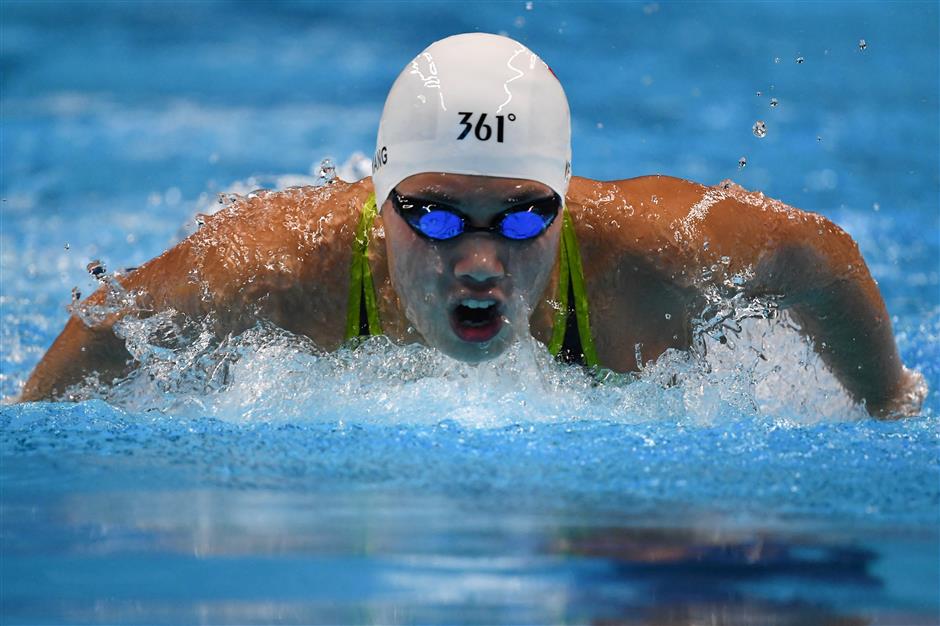 Zhang Yufei competes in the final of the women’s 200 meters butterfly swimming event during the 2018 Asian Games in Jakarta in this August 22, 2018, photo.

"The tremendous progress of the new butterfly queen Zhang Yufei is the most exciting and encouraging for Chinese swimmers and the swimming industry," the newspaper said.

"At the Tokyo Olympics, Zhang Yufei ... alone can compete for two gold medals and has heavy responsibility on her shoulders."

China will be hoping she can match the performance of Liu Zige who won the women's 200 butterfly gold at the 2008 Beijing Games and is the current world record holder.

The Tokyo 2020 Games, which were postponed last summer because of the coronavirus pandemic, are scheduled to begin on July 23