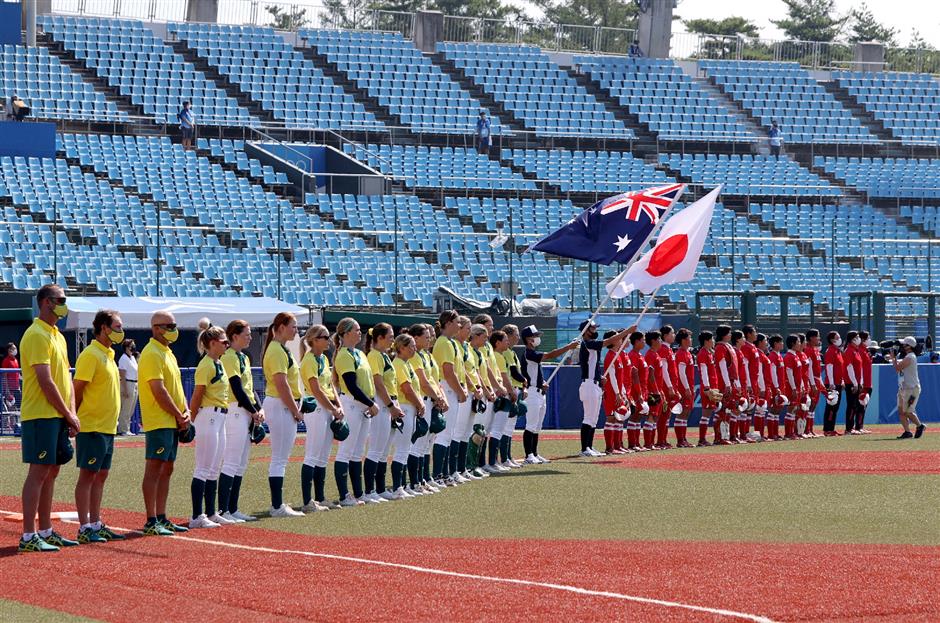 The Tokyo Olympics sports program finally opened after a year's pandemic delay with softball in disaster-hit Fukushima on Wednesday as the Games suffered their first drugs controversy.

Japan thrashed Australia 8-1 in the first action of the 2020 Games, which are struggling for public support with Tokyo under a state of emergency following a surge in coronavirus cases.

Fans are barred from most of the Olympics and the game took place in front of empty stands at Fukushima, which was ravaged by an earthquake, tsunami and nuclear disaster in 2011.

The Olympics are being staged in biosecure "bubble" conditions, with athletes tested daily and under orders to stay socially distanced and wear masks when not competing, training, eating or sleeping.

Later, the Australian city of Brisbane is expected to be confirmed as host of the 2032 Olympics in a vote at the International Olympic Committee session.

As the sport program started, Australian showjumper Jamie Kermond was provisionally suspended after testing positive for cocaine on June 26.

Under Australia's anti-doping policy, he now has the opportunity to have his B-sample analyzed. Australian reports said Kermond did not travel to Tokyo with the rest of the team.

"Mr Kermond is prohibited from participating in any WADA-compliant event, including the Tokyo 2020 Olympic Games, while the provisional suspension is in place," Equestrian Australia said.

"There is no zero risk in life; there is only more risk, or less risk. And you have done your best," he told the socially distanced, mask-wearing delegates.

Another eight Games-related coronavirus cases were announced, taking the total to 79.

Brisbane, Australia's third-biggest city, is the sole candidate and has been named as the "preferred bidder" for 2032, making it all but certain to be named as host.

But the vote is "not a done deal," IOC communications director Mark Adams insisted.

"This is not a done deal because it's still up to the session to decide," Adams said on Tuesday.

"They can decide to put the issue back in the pot – there are still a number of interested cities."

Although no fans were present at the softball in Fukushima, one unexpected spectator was spotted before the game: a bear, which appeared late on Tuesday and early on Wednesday.

"We couldn't find or capture the bear, and while there won't be any spectators at the stadium, we are on alert and searching for the bear around the site," a police spokesman told AFP.