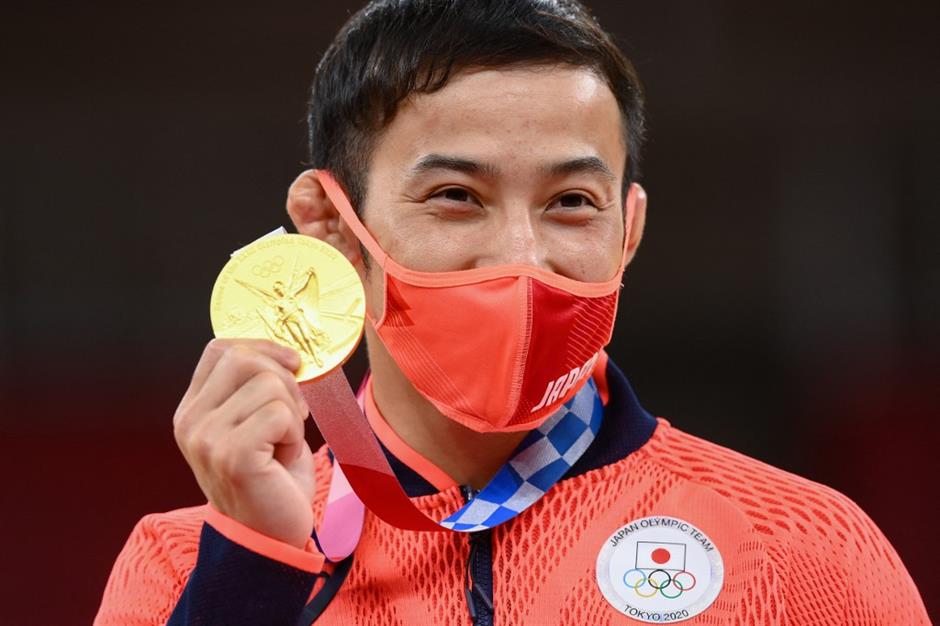 Gold medallist Japan's Naohisa Takato celebrates during the medal ceremony for the judo men's -60kg contest during the Tokyo 2020 Olympic Games at the Nippon Budokan in Tokyo on July 24, 2021.

Japanese judoka Naohisa Takato and Distria Krasniqi of Kosovo dominated on day one of the Tokyo Olympics judo competition in Nippon Budokan on Saturday.

In men's -60kg semifinal, Takato defeated Yeldos Smetov of Kazakhstan in a struggling match with a seven-minute golden hour, his opponent in the final, Yang Yung-Wei of Chinese Taipei, also went through a long battle. But Yang suffered a match-deciding penalty in the final, surrendering the gold medal to the Japanese.

In women's -48kg, after beating world champion Daria Bilodid of Ukraine in the semifinal, home favorite Funa Tonaki encountered Distria Krasniqi of Kosovo in the final and was defeated by a waza-ari in three minutes and 41 seconds, which marked Kosovo's first gold medal in the Tokyo Olympics.

Chinese judoka Li Yanan finished 9th in women's -48kg. She beat Rio Olympics bronze medalist Otgontsetseg Galbadrakh of Kazakhstan by an ippon in the round of 32 but lost to Portuguese Catarina Costa in the same way in the next round.

The 27-year-old told Xinhua that she was not satisfied with the result despite Costa's world ranking being much higher than hers.

"I did well in the first round, but was overwhelmed by the European judoka in the second round, she was stronger than me," said Li. "However, I was happy to be here, on the biggest stage in the world."