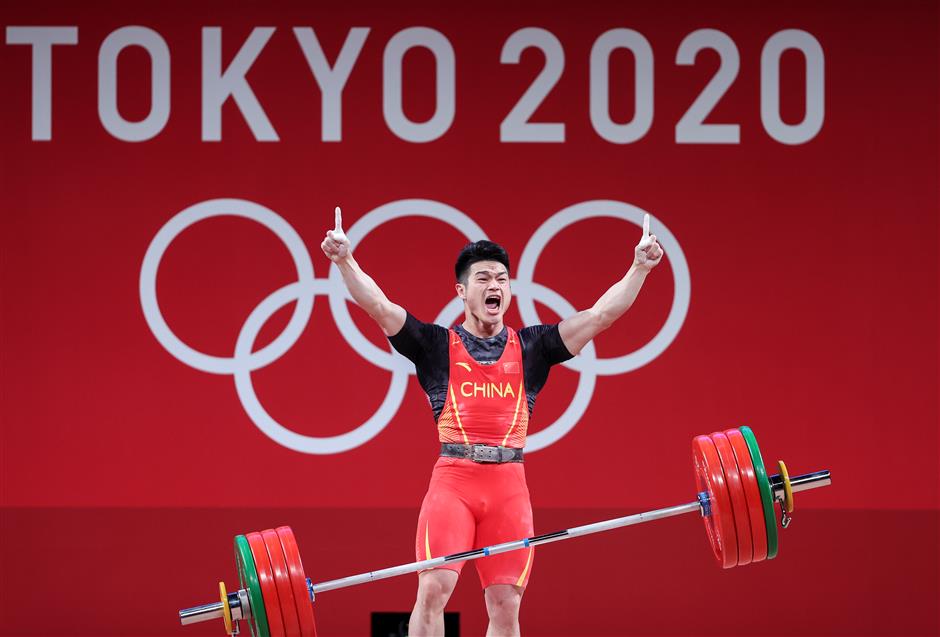 A late challenge by his closest opponent, Julio Ruben Mayora Pernia of Venezuela, pushed Shi to go for 198kg that ties the world record in his third attempt in the clean and jerk, before a new world record in total was born when Shi lifted the dumbbell over his head.

Beaming with joy, Shi sat on the dumbbell with a huge roar.

Holding all three world records in snatch, clean and jerk as well as in total, Shi's superiority was obvious from the outset as he conducted his first snatch attempt at 158kg - 2 kg above the best results of his nearest rival Mayora Pernia - and succeeded.

Shi, the men's 69kg weightlifting gold medalist at Rio Olympics, then extended his lead and set an Olympic record of 166kg in the third snatch attempt.

The advantage allowed Shi to play it safe in the clean and jerk and succeeded in lifting 188 kg in his first attempt.

Mayora Pernia mounted a last-bit challenge by trying 199kg after Shi's second attempt of 192kg was ruled no lift by judges. But that in term push Shi to increase to 198kg in his third attempt, which he succeeded and set a new world record in total at 364kg compared to his previous world record of 363kg.

Mayora Pernia won a silver medal for Venezuela with 346kg and Rahmat Erwin Abdullah of Indonesia came up third with 342kg.

Shi was the third Chinese man to win gold at Tokyo 2020 following Chen Lijun's success in the 67kg category and Li Fabin's victory in the 61kg division.

China has now won four gold medals in weightlifting at these Games with Hou Zhihui winning the other in the women's 49kg class.