Stephen Curry posts a video of a boy playing basketball on Weibo today.

Like what he did one year ago, NBA megastar Stephen Curry once again resorted to social media to find a Chinese boy who impressed him with outstanding basketball skills in a video circulated online.

"This kid is a baller! He really took the whole bag (emoji) and then some chili (emoji). Can someone help find this future basketball star?" wrote the Golden State Warriors star guard on China's Twitter-like platform of Weibo.

Curry also posted a video of the kid showcasing some Steph-like ball-handling moves on the court, including crossovers, spins, step-back jumpers and long-range shots, and the boy has given people more reasons of being reminded of Curry with his No. 30 jersey.

In a sport traditionally dominated by big and athletic guys, the emergence of Curry has changed its landscape in recent years with his silky shooting and eye-pleasing motions.

"Don't you know your classmate?" joked a fan whose comment earned 12,000 likes.

"He really plays like you," commented another named "Mamba Hang." 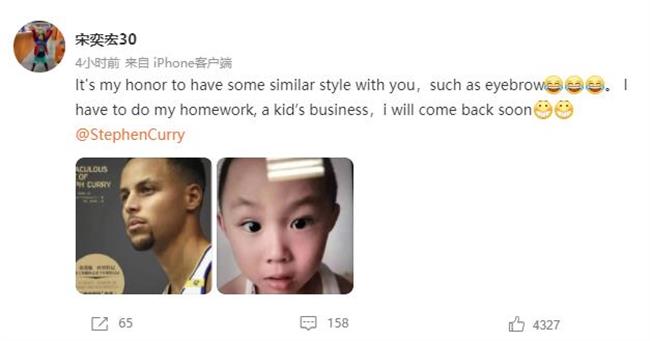 The "Curry Jr." is an 8-year-old boy named Song Yihong. The scene catching Curry's attention took place in a "mini-basketball" match in Beijing.

Song wrote on Weibo that he was honored to "have some similar style" with Curry.

One video of Song's Steph-esque moves has earned over 237,000 likes and 16,000 comments on the popular Chinese short-video platform Douyin.

"He deserves the No. 30 jersey," one netizen commented.

It's not a rare move for Curry searching Chinese young basketball sensations through social media, as he did it toward one-armed basketball-playing teenager Zhang Jiacheng last year.

After Zhang's video of displaying spectacular basketball skills went viral on the Internet, it also struck a chord with Curry from the other side of the Pacific Ocean..

"Who is this kid? Help me find him! Keep doing you and don't let anyone tell you that you can't," Curry wrote on Weibo along with the hashtag "Stay Underrated."

"I will work harder," Zhang replied to his idol in Chinese, which was then translated into English by netizens.

Another wave of encouraging words from Curry arrived.

"You are an inspiration. You don't take 'no' for an answer. You've found a way to overcome and get out there on the basketball court and show people how much the game means to you," said the three-time NBA winner in a video message to Zhang.