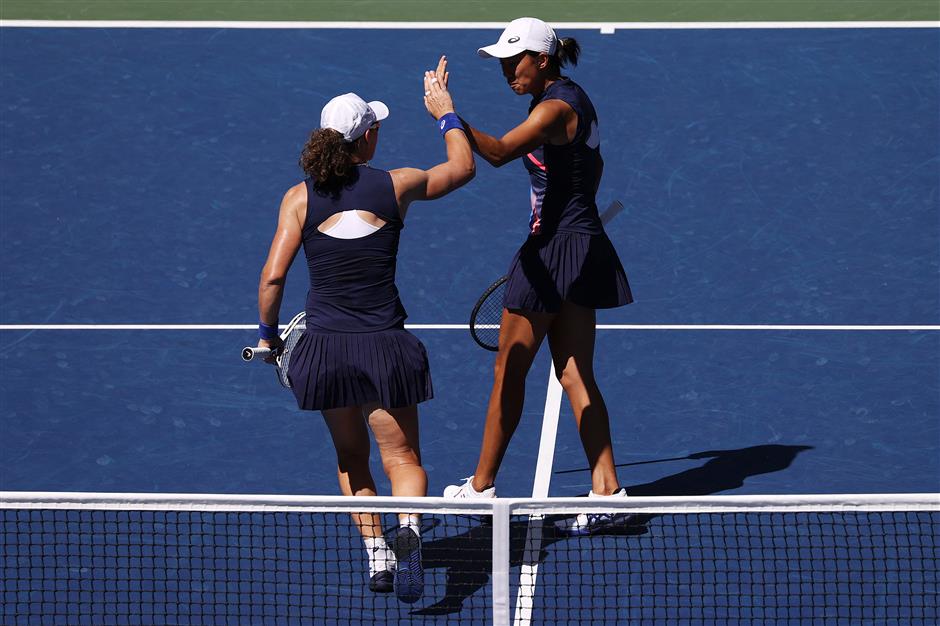 Shuai Zhang of China and Samantha Stosur of Australia celebrate against Caroline Dolehide of the United States and Storm Sanders of Australia during their Women's Doubles quarterfinals match on on September 7, 2021, at the USTA Billie Jean King National Tennis Center in New York City.

China's Zhang Shuai and the 2011 US Open women's singles champion Samantha Stosur of Australia beat No. 7 seeds Alexa Guarachi and Desirae Krawczyk in straight sets to reach the doubles final on Friday.

The Chinese and Aussie combination, seeded 14th in this year's tournament, eased past their opponents respectively from Chile and the United States, 6-2, 7-5 with wide experience on the court, tacit understanding and strength.

"I can't believe it was so long ago that I won the doubles here with Lisa Raymond," Stosur said. "I was pretty young, 21 or something, and everything was amazing."

"And now to still be out here, having another chance with Shuai, is just incredible. I've had a great career, and to be in another Grand Slam final in New York is really, really exciting," she added.

Zhang and Stosur came out the last veterans in the women's competition of this year's US Open. They will next play American teen pair Coco Gauff and Catherine McNally in the women's doubles final.