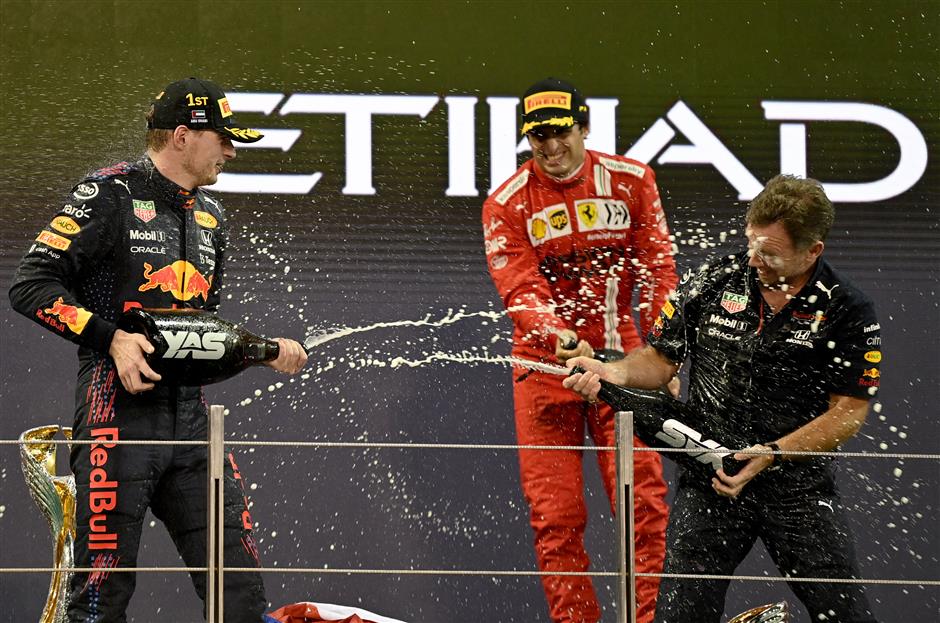 Max Verstappen clinched his first Formula One world title when he won a dramatic season-ending Abu Dhabi Grand Prix on Sunday, but only after two protests from Lewis Hamilton's Mercedes team were rejected.

Just as it seemed Hamilton was heading for his eighth world title, Verstappen took advantage of a crash by Nicholas Latifi that effectively set up a one-lap dash for the title.

Verstappen and Hamilton, who had begun the race level on points, started that final lap wheel to wheel but the 24-year-old Red Bull driver pulled away to take the chequered flag.

It was a compelling end to a championship for the ages, played out over 22 spell-binding acts.

It came in the unlikely shape of Latifi, who crashed his Williams, with Dutchman Verstappen promptly pitting for fresh tyres while Hamilton did not.

When racing resumed for the 58th and closing lap at the Yas Marina circuit Verstappen barged past Hamilton to take the chequered flag, sparking joy on the Red Bull pitwall and fury at Mercedes.

After a lengthy hearing, the stewards rejected the protests. Mercedes announced their intention to contest the verdict and have 96 hours to formalise or withdraw an official appeal.

So this extraordinary title race could still finish in the hands of the lawyers.

For now though, Verstappen revelled in his new status as world champion.

"It's insane," he said. "My goal when I was little was to be a Formula One driver. You dream of podiums and victories. But when they tell you that you are world champion, it's incredible."

Hamilton was magnanimous in defeat, embracing his nemesis and saying: "Congratulations to Max and his team."

The 36-year-old Briton added: "We gave it everything this last part of the season and never gave up, that's the most important thing."

The Netherlands erupted in celebrations at a first ever Dutch F1 world champion.

"What an unbelievable end. I have lost my voice," Tom Alsem, 30, said in a bar in the Hague.

Verstappen and Hamilton had approached the winner-takes-all denouement in the desert level on points, the first time since 1974 that title rivals had been in that position going into the final race.

Fittingly the two filled the front row, Verstappen on pole after a flying lap in qualifying.

But Hamilton got off to a blinding start, beating Verstappen to the first bend.

The Dutch driver lunged to reclaim the lead on Turn Seven, forcing his arch-rival off the track.

The Briton rejoined in front, but the race stewards controversially decided no investigation was necessary, sparking incredulity in the Red Bull enclosure.

"That is incredible, what are they doing here?" Verstappen complained over the team radio.

After a dozen laps Hamilton had pulled over five seconds clear of Verstappen.

The Dutchman pitted on lap 14, rejoining in fifth place.

One lap of drama

Mercedes then brought in Hamilton for a lightning pit stop.

He came back also on hard tyres in second, behind Red Bull's number two driver Sergio Perez, with the Ferrari of Carlos Sainz ahead of Verstappen, who soon had the Spaniard's measure.

Perez then showed himself the ultimate teammate, frustrating Hamilton's numerous attempts to overtake, allowing Verstappen to cut the gap.

Hamilton finally hit the front, with Perez ceding his place to Verstappen.

"Checo is a legend," said an appreciative Verstappen on team radio.

At midway, with night falling, Kimi Raikkonen's race ended, the 2007 world champion heading to retirement after a record 349 races.

Back on the track the gap between the leaders was four seconds, and growing lap by lap as the superior speed of the Mercedes came into play.

A virtual safety car on lap 36 saw Verstappen pit for a fresh set of tyres on his Red Bull.

"Bit of a risk to leave me out?" Hamilton, 17 seconds clear, asked his team, the champion worried about becoming a sitting duck on his older tyres.

In the end, that decision proved crucial.

It appeared Hamilton would emerge victorious, but this magical season had one last trick up its sleeve, leaving a gifted and pugnacious Belgian-born Dutchman to be crowned a worthy world champion.