Bing Dwen Dwen dances at the opening ceremony of the Beijing 2022 Olympic Winter Games, melting the hearts of the audience.

Guess who is the most popular at the ongoing Beijing 2022 Olympic Winter Games? A giant panda without doubt.

Bing Dwen Dwen, one of the Beijing 2022 mascots, quickly won the hearts of athletes, politicians, reporters, audiences and all those following the Games across the globe.

After their round robin encounter in the curling mixed doubles on Saturday, the US pair of Christopher Plys and Victoria Persinger received two sets of the Games' commemorative pins featuring the beloved Bing Dwen Dwen – with four pins in each set – as gifts from China's Ling Zhi and Fan Suyuan, though the Chinese pair lost the match to the Americans.

"So cool!" Plys said as he received the pins, while Persinger wore a big smile. Both could not hide their excitement.

The US pair posted the gifts on Twitter later, praising the Chinese athletes' sportsmanship.

On Saturday night, five Bing Dwen Dwen dolls with golden leaves awarded to the Chinese team who won the 2,000m mixed relay of short track speed skating immediately caught the attention of Chinese netizens. Everyone wanted to have similar ones. 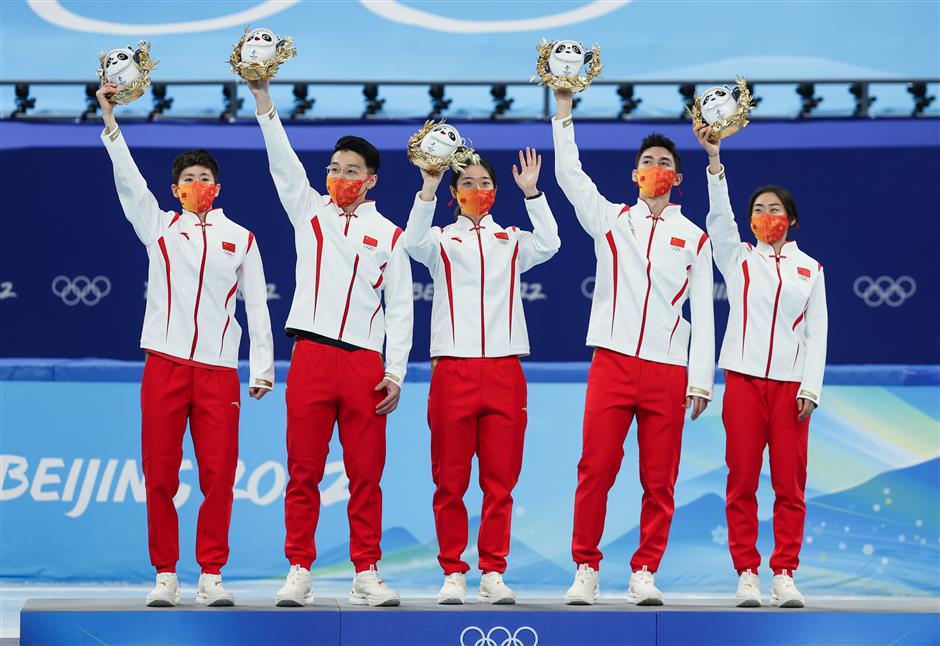 A Japanese reporter has gained popularity on social media platforms in China and Japan, as he was quick to buy a variety of Bing Dwen Dwen souvenirs, including pins, T-shirts and toys, before the Games opened.

Czech's figure skater Natalie Taschlerova showed off a Bing Dwen Dwen doll in a vlog capturing her life in the Olympic Village.

She even put the doll in bed with her.

"First night with my panda, good night everyone," she said in the vlog. 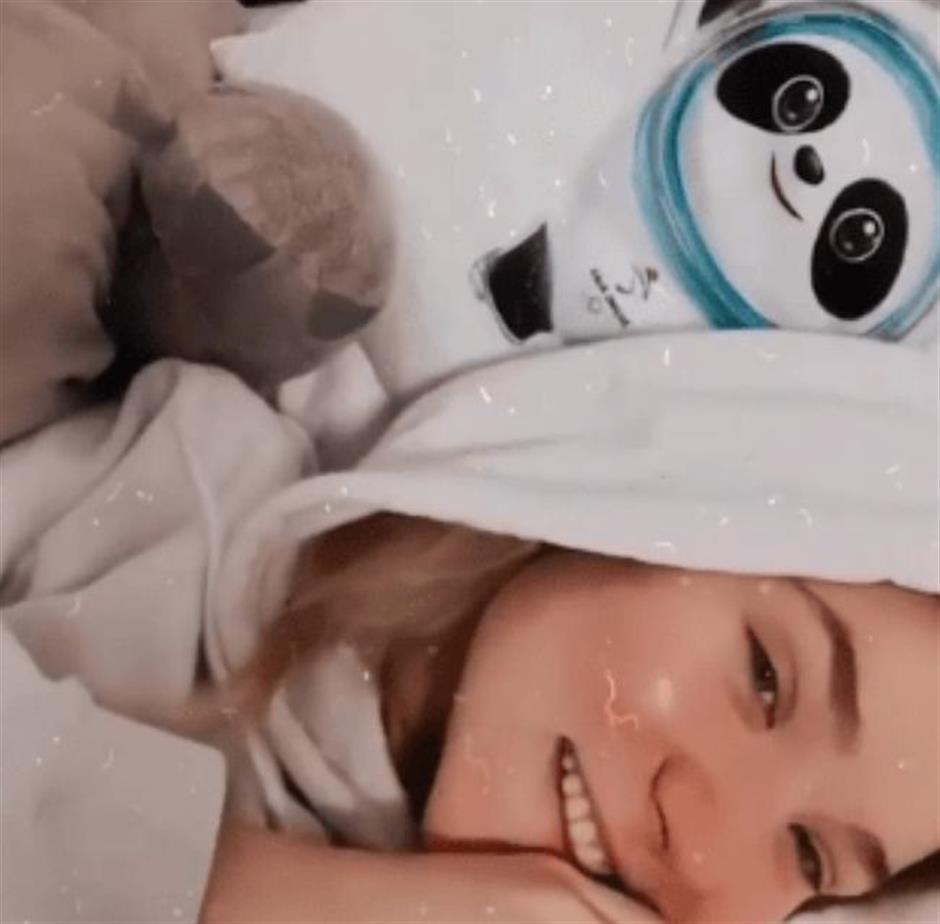 Natalie Taschlerova shares a moment with a Bing Dwen Dwen doll in a vlog capturing her life in the Olympic Village.

The Bing Dwen Dwen dolls have been sold out at authorized stores at the Beijing 2022. Some people queued for seven hours in chilly winds at the flagship store selling licensed Beijing 2022 merchandise on the Wangfujing shopping street in downtown Beijing.

The cute mascot has become the favorite and most fancy Chinese New Year gift for friends and relatives among Chinese.

About 5,000 types of licensed Winter Olympics merchandise with creative and elaborate designs have been developed, covering a wide range of items such as pins, clothing, silk products, ceramics and plush toys.

Rational consumption has been called for.

On Saturday, flagship shops of the Winter Olympics started putting a cap on the purchase amount of some popular items like stuffed toys and garage kits.

The number of visitors in shops is also limited, with about 100 allowed inside every one hour.

On Sunday, Zhao Weidong, a spokesman for the Beijing 2022 organizing committee, said the supply of Bing Dwen Dwen will be increased.

"There are some friends asking me where to buy Bing Dwen Dwen these days, which mirrored the popularity of the winter games," Zhao told a press conference.

"Because of the Spring Festival holiday, some workers returned home, but we have stepped up coordination to cope with the abrupt popularity to increase the supply of the mascot," said Zhao.

Meanwhile, he called for more attention for the other Beijing 2022 mascot, Shuey Rhon Rhon. The Paralympic mascot seems to be overshadowed by Bing Dwen Dwen and is not mentioned often in media reports.

Shuey Rhon Rhon, a red lantern baby, is seen as a symbol of harvest, warmth and light. The design features the traditional Chinese craft of paper cuts. 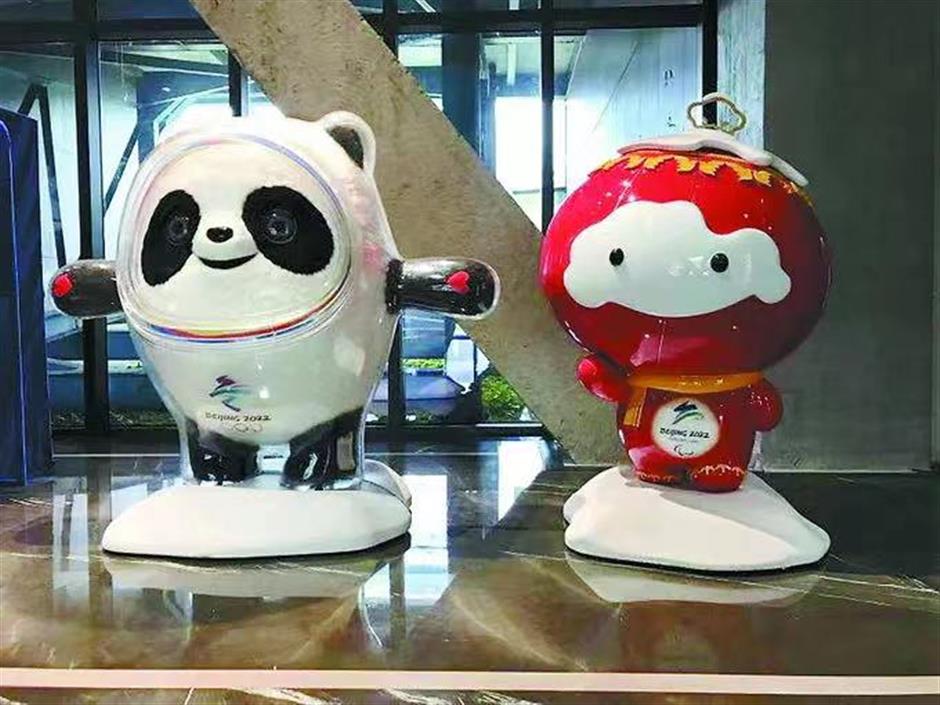 But why is Shuey Rhon Rhon not that popular? Maybe just because her partner is a giant panda.

The giant panda is a widely beloved representative of China to the world and regarded as an ambassador of friendship. It is a highly adorable figure representing China among overseas people.

Bing Dwen Dwen wears a unique helmet, with its inspiration drawn from helmets used in snow and ice sports. The helmet is decorated with a colorful ring of light. All of these give Bing Dwen Dwen a cool look, indicative of an astronaut.

The two mascots combine elements of traditional Chinese culture and a modern international style, as well as emphasize the characteristics of ice and snow sports.

They are also designed to express the full spectrum of the Olympic spirit, encompassing traits such as passion, perseverance, friendship and mutual understanding.

The design of the mascot took 10 months, according to Cao Xue, chief of the designer team.

"It came a surprise to us that Bing Dwen Dwen is so popular, and many of my friends and relatives asked whether I have one," said Cao. "I am sorry to tell that I have none, but there will be some soon."

Cao said even his son has not got one so far due to Bing Dwen Dwen's popularity.

"Bing Dwen Dwen has a cold shell of ice, which is indicative of coldness, but on the contrary, it bears the feel of warmth and cuteness," he said. "Even if the Winter Olympics closes and Bing Dwen Dwen becomes part of the history, the warm memory will linger on.

"I hope it will become a classic at least in the Olympic history, and it will leave a deep impression on people's minds."