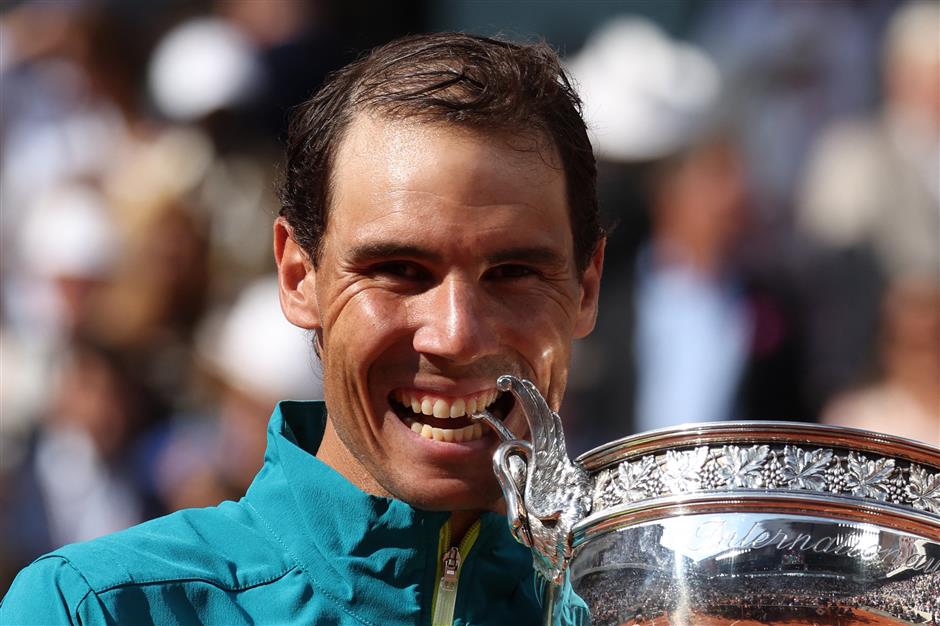 Spain's Rafael Nadal celebrates with The Musketeers' Cup as he celebrates after victory over Norway's Casper Ruud during their men's singles final match on day fifteen of the Roland-Garros Open tennis tournament at the Court Philippe-Chatrier in Paris on June 5, 2022.

Rafael Nadal cruised to a record-extending 14th French Open title in style, sweeping Casper Ruud of Norway 6-3, 6-3, 6-0 in a one-sided final on Sunday.

By capturing his 22nd Grand Slam trophy, the Spaniard, who turned 36 on Friday, moved further clear of Novak Djokovic and Roger Federer in the Grand Slam race, with the Serbian and the Swiss tied on 20 major titles.

"For me personally, it is very difficult to describe the feelings that I have. It is something that I have never believed. To be here at 36, being competitive again on the most important court of my career," Nadal said during the trophy ceremony.

The King of Clay needed multiple injections to relieve the pain in his left foot during the tournament and has left his future uncertain in the press conference after the match.

"It's obvious that with circumstances that I am playing, I can't and I don't want to keep going, so the mindset is very clear. I'm going to keep working to try to find a solution and an improvement for what's happening in the foot," said the Spanish veteran, who will undergo treatment again this week back in Spain.

"If it works, I keep going. If not, it will be another story and I will ask myself if I am ready to do a major surgery which may not guarantee I will be competitive and may take a long time to be back."

As for the upcoming grass major in Wimbledon where he is a two-time champion, Nadal said he would absolutely go there if his "body is ready".

"Wimbledon is not a tournament that I want to miss," he said.

With huge applause and support from the full stadium, the fifth seed struck 37 winners in the match including 14 from the deciding set, with his opponent only at 16.

Eighth seed Ruud, who once practised at Nadal's tennis school, tried to bounce back in the second set, breaking in game four to take a 3-1 lead. But the Spaniard proved why he is the King of Clay rapidly, winning 11 games in a row to wrap up the victory in two hours and 18 minutes.

"He plays the same style in practice and matches. He takes the practices very seriously, and so do I," said the Norwegian.

"But the circumstances were a bit different today. It was the first time I have experienced to be in this situation and play a Grand Slam final. It was a little bit tough to find myself too comfortable in the situation in the beginning," the 23-year-old said.

Nadal, the oldest winner in Paris, improved his stunning record at Roland Garros to 112 wins against just three defeats after the final. 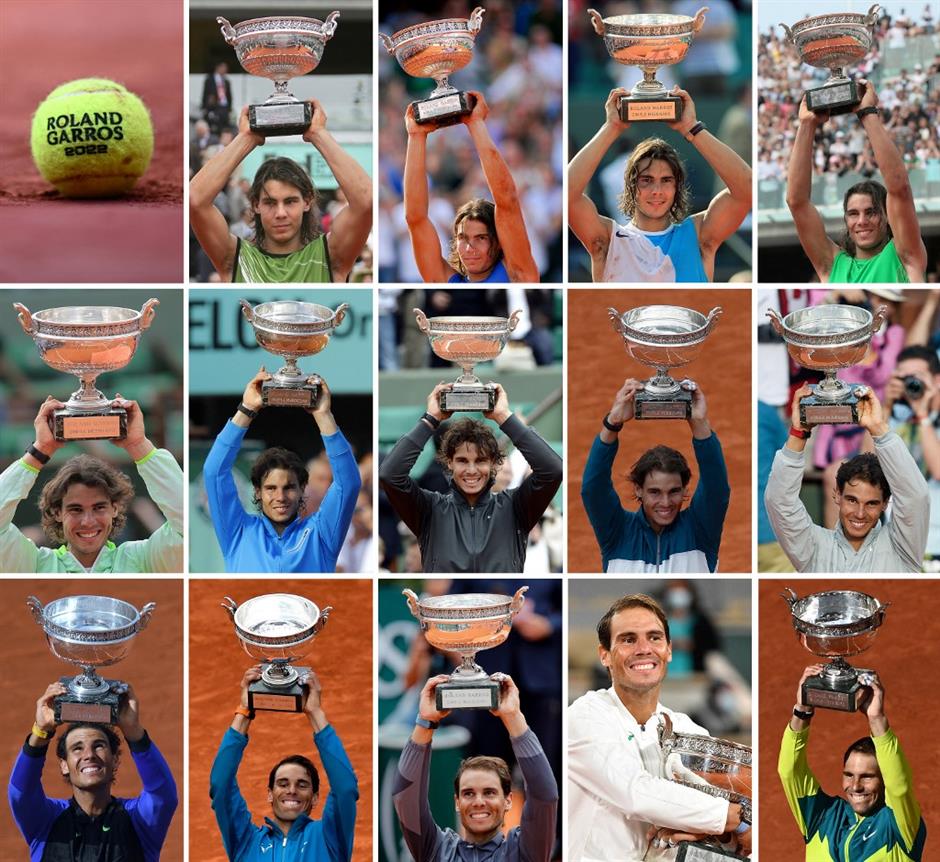 This combination of file pictures shows Spanish Rafael Nadal holding the Mousquetaires Cup (The Musketeers) after his 14 victories at the tennis French Open at Roland Garros.