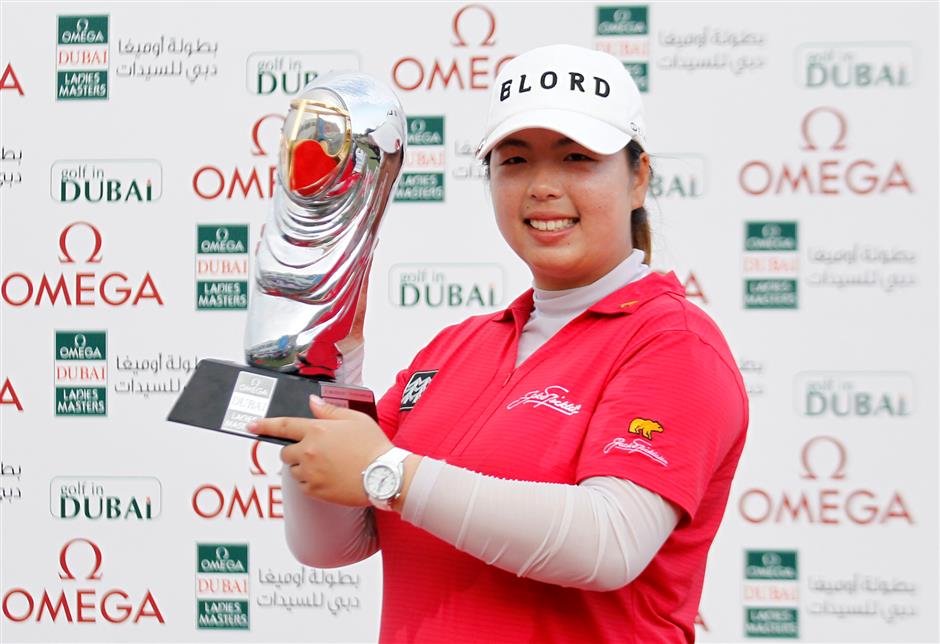 Feng Shanshan of China poses with the winner's trophy on the 18th green after the fourth and final round of the Dubai Ladies Masters at the Emirates Golf Club in Dubai on December 8, 2012.

China's former world No. 1 and 2016 Olympic bronze medalist Feng Shanshan announced her retirement from professional golf and the LPGA Tour on Tuesday.

"Now it is time for me to try something different," said Feng, who will turn 33 on Friday, in a statement posted on her official Instagram page.

The announcement comes a year after her last competitive appearance at the Tokyo Olympics, where Feng had strongly hinted she was about to retire.

"In recent years, the global pandemic has changed a lot of things, and has me reflecting," she said.

"It is time to slow down a little, focus more on my personal growth, and spend some time with my family."

Feng told AFP in Tokyo it had been an honor to represent her country, for potentially the last time.

"We're representing our own countries and we're not playing for prize money, we're playing for honor," she said at Kasumigaseki Country Club, where she could not repeat her medal heroics of five years earlier, finishing eighth.

"Out of all my achievements, I would say a medal at the Olympics is very special," said Feng, whose only major win came at the 2012 US PGA Championship.

"Even though I've been a major winner, think about it, we have five majors every year, in four years we have 20 chances to win a major.

"So I would say it's harder, much harder, to get a medal at the Olympics. It was the most memorable moment of my career."

Brought up in China's southern Guangdong Province, an 18-year-old Feng became the first Chinese player to earn an LPGA tour card in 2007.

The easygoing Feng went on to be the first Chinese player, man or woman, to win a major and lifted 10 LPGA titles during her 14 active years on the tour.

In 2017, Feng became the only Chinese golfer to date to reach the world No. 1 ranking.

During a supremely consistent career, Feng registered 18 top-10 finishes in majors, two of them in 2021 even as she was winding down her playing commitments.

It seems clear that golf will remain a big part of Feng's life, even in retirement.

Since December she has been helping to coach China's women's national team.

"I will be devoting my heart and sweat off the course in helping young talents grow," she wrote. "Golf has brought me everything. Maybe now is my chance to give back."