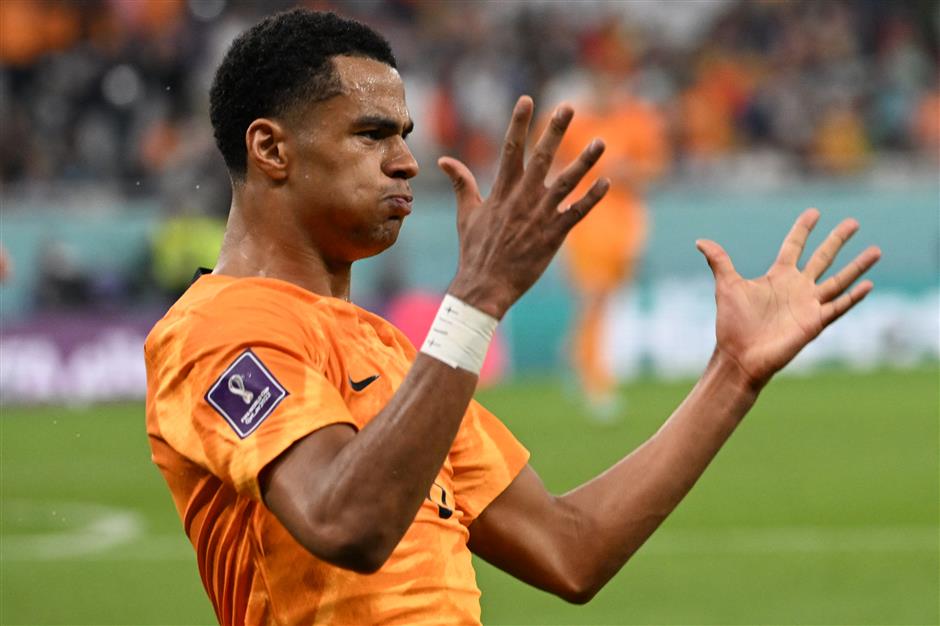 Netherlands' forward Cody Gakpo celebrates after he scored during the Qatar 2022 World Cup Group A football match between Senegal and the Netherlands at the Al-Thumama Stadium in Doha on November 21, 2022.

Cody Gakpo and Davy Klaassen struck late goals as the Netherlands beat Senegal 2-0 in their FIFA World Cup Group A clash on Monday.

Gakpo broke the deadlock with an 84th-minute header after Frenkie de Jong's sublime delivery into the box and substitute Klaassen doubled the advantage when he fired home in the last minute of stoppage time.

Senegal, already depleted by a fibula problem that has ruled out star striker Sadio Mane for the rest of the tournament, suffered a double blow when Abdou Diallo and Cheikhou Kouyate were forced off the pitch in the second half with injuries.

Senegal started brightly and Ismaila Sarr had a chance to give his side an early lead with a speculative shot from distance that sailed just over the crossbar.

But the Netherlands settled quickly and began to dominate in midfield, with De Jong looking particularly at ease as the Oranje's midfield fulcrum.

Ajax center-back Daley Blind almost put the Dutch ahead with a downward header at the far post but his shot flew just wide of the left-hand post.

De Jong then had a golden chance to put his team ahead as he found himself in space inside the penalty area following a slick interchange between Steven Bergwijn and Steven Berghuis. But the Barcelona forward took one touch too many, allowing Senegal's defense to win back possession. Berghuis also saw a long-range attempt fly over after Vincent Janssen's layoff.

The Netherlands continued to pose an attacking threat after the interval and Virgil van Dijk's header at the near post narrowly missed the target after Gakpo's corner.

Senegal executed their first meaningful attacking move just after the hour when Boulaye Dia turned smartly before seeing his shot parried away by Andries Noppert.

The African side were suddenly playing with confidence and Everton midfielder Idrissa Gueye again forced a smart save from Noppert with a powerful shot after clever work from Sarr on the left flank.

The Dutch finally broke the deadlock when Gakpo struck against the run of play six minutes from time. The PSV Eindhoven winger timed his run to perfection to latch onto De Jong's cross and head into the top-left corner.

But Senegal did not lie down and Pape Gueye again sent Dutch pulses racing with a 20-yard effort that was tipped around the post by Noppert.

The Netherlands put the result beyond doubt in the 99th minute after Memphis Depay's shot was kept out by Edouard Mendy. The ball rebounded kindly for Klaassen, a 79th-minute replacement for Bergwijn, and the Ajax midfielder responded by slotting the ball into an unguarded net.

The Netherlands will meet Ecuador in their next match on Friday while Senegal will face Qatar on the same day.