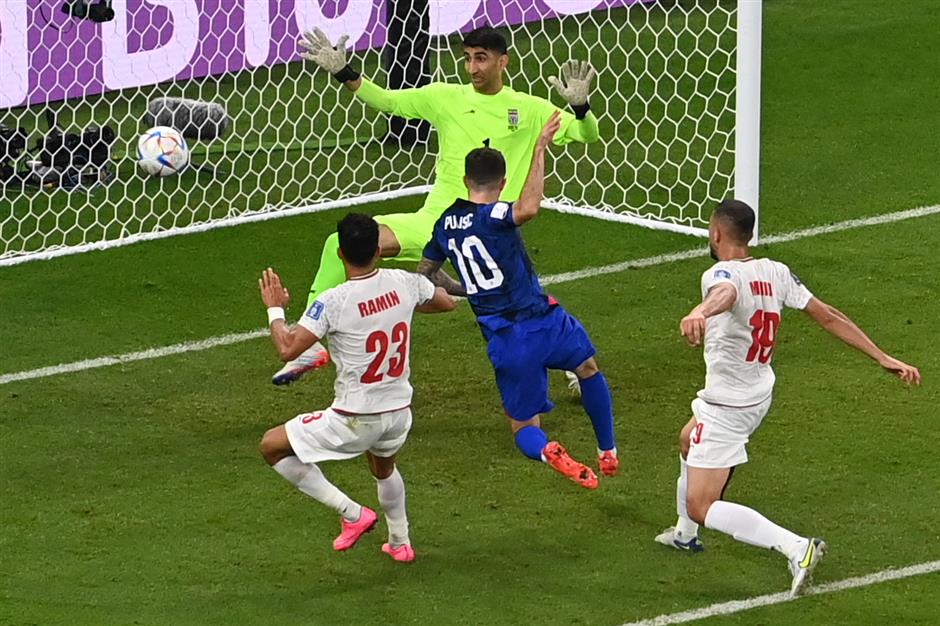 USA's forward Christian Pulisic scores his team's first goal past Iran's goalkeeper Alireza Beiranvand during the Qatar 2022 World Cup Group B football match between Iran and USA at the Al-Thumama Stadium in Doha on November 29, 2022.

Christian Pulisic's sole goal helped the United States beat Iran 1-0 and qualified for the last 16 in the 2022 FIFA World Cup at the Al Thumama Stadium on Tuesday.

Iran, who have never reached the World Cup knockout stage in their previous five attempts, needed at least a draw to secure four points for their progress. Pressed by the US at the beginning, Iran created few chances but managed to keep a solid formation.

The opener came in the 38th minute when Chelsea winger Pulisic bundled the ball home in very close range thanks to Sergino Dest's cross from the right side.

Tim Weah almost enlarged the advantage for the US when he scored late in the first half before being denied by VAR because of an offside.

Iran strengthened their attack as Saman Ghoddos nodded a deflected right-wing cross at the back post but could not steer it on target in the 52nd minute.

In the final minutes, the US dropped deeper and deeper to better defend the opponents' attacks. A one-goal victory could assure them a slot in the last 16 while Iran once again failed to qualify.

As Group B runners-up, the US will play against Group A winners the Netherlands in the round of 16 at Khalifa International Stadium on Saturday.