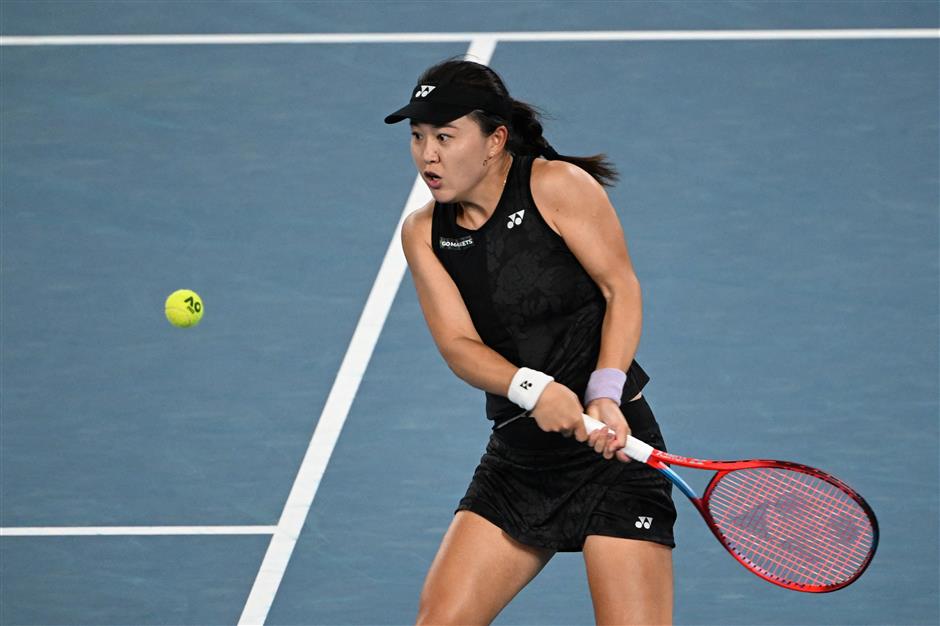 China's Zhu Lin hits a return against Belarus' Victoria Azarenka during their women's singles match on day seven of the Australian Open tennis tournament in Melbourne on January 22, 2023.

On day six of the Australian Open, China's Zhu Lin was edged 4-6, 6-1, 6-4 by the 24th-seeded and former Grand Slam winner Victoria Azarenka of Belarus, while Yang Zhaoxuan and her partner of Chinese Taipei Chan Hao-ching reached the third round in women's doubles with a straight-set win.

"It was a super tough match. I'm really exhausted. I mean I gave everything out there, and I'm really proud of myself," Zhu told reporters after the match.

"Victoria, she's a Grand Slam champion. You have to be like 120 percent, or even 200 percent to be able to beat her," the 28-year-old Chinese player said. "I need to be more consistent. This is what I need to work on."

Zhu broke the two-time Australian Open champion and held her own serve to lead 2-0 before Azarenka survived six deuces to claw one point back in the fourth game.

Both players fired roughly the same amount of winners - 15 from Azarenka and 14 from Zhu, but two double faults and 15 unforced errors obliged the Belarusian veteran to concede 6-4 in the 53-minute opening set.

In the second set, Azarenka stormed to a commanding 5-0 advantage with higher serve speed but reduced errors. Facing a 40-0 down in the seventh game, Zhu tried to save the set with her impressive forehand winners, but Azarenka drew a backhand error from Zhu and hit 6-1 on the scoreboard.

The breaking-serve episode kept repeating itself throughout the six games of the decider. When the score was tied at 4-4, Azarenka broke Zhu in the determining ninth game and held her serve in the following game to seal the hard-fought win after playing two hours and 40 minutes on the center court of the Rod Laver Arena.

"With this tennis, She must be in the top 20 players. Of course, I know her from China. But in tennis, I have never heard of her before," said Azarenka, adding that she hoped to see Zhu a lot more this year.

As the 11th-seeded pair, Yang Zhaoxuan and Chan Hao-ching breezed to a comfortable 6-3, 6-3 triumph over Cristina Bucsa of Spain and Makoto Ninomiya of Japan.

Yang and Chan took four games in a row to notch their first set win within 30 minutes. The higher-ranked pair later extended their dominance into the second set, during which they broke Busca/Ninomiya twice and capitalized on a 40-0 advantage to secure their spot in the third round.

Yang and Chan will play Anhelina Kalinina of Ukraine and Alison Van Uytvanck of Belgium. The unseeded Ukrainian-Belgian duo knocked out the eighth seed Anna Danilina of Kazakhstan and Sania Mirza of India 6-4, 4-6, 6-2 in a two-hour boilover.

China's Zhang Shuai and Brazil's Beatriz Haddad Maia were edged past by Czech pair Miriam Kolodziejova and Marketa Vondrousova in a two-hour, 31-minute thriller. Despite a 3-6 first-set win, Zhang and Haddad Maia dropped their match after losing 7-6 (9), 7-6 (12) in tiebreaks.