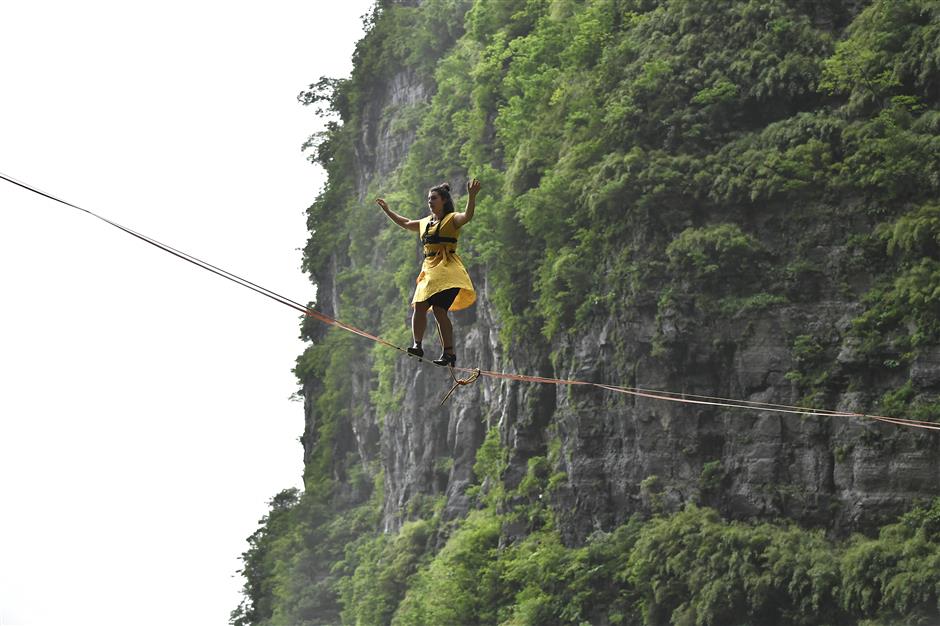 Mimi Guesdon of France participates in a slackline contest in high heels in a world debut challenge across cliffs of the Tianmen Mountain in Zhangjiajie National Forest Park in Zhangjiajie City, central China's Hunan Province, on May 27, 2018.

The women from France, Canada and the United States walked on a rope 25 millimeters wide, across mountains 1,400 meters above sea level at Zhangjiajie National Forest Park on Sunday.

Despite a breeze and drizzle, French participant Mimi Guesdon crossed the 55-meter canyon in 5 cm high-heels, finishing in 9 minutes and 24 seconds, winning the competition.

Guesdon, who has been slacklining for about six years, said that the park was "a very beautiful place to practice the sport."

Canadian participant Mia Noblet finished the challenge in 22 minutes and 36 seconds, while Faith Dickey of the United States failed to complete the walk.

Last week, European performing group Houle Douce played their instruments while on the slacklines. The six-member group played traditional Chinese folk music as well as jazz and swing music while walking on ropes across the mountains.

"When playing in the air, I feel like flying and my music is flying too," said band member Lucie Botiveau.