The video of Yang skipping down the road was captured by a passerby surnamed Yuan and soon went viral. 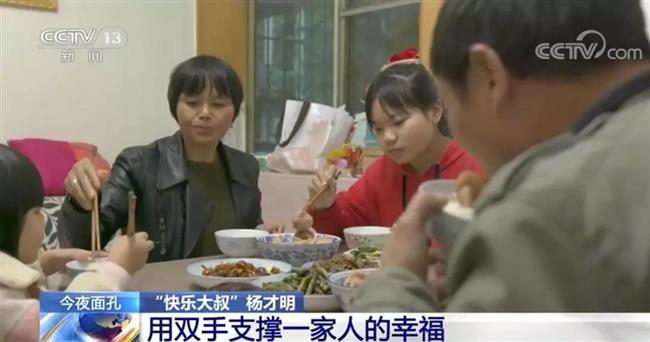 Yang enjoys a meal with his family.

A construction worker in southwest China's Chongqing became an Internet sensation recently after a video of him skipping down the road went viral, China Central Television reported.

Yang Caiming, a carpenter at a construction site, earned the nickname of "Happy Uncle" after viewers were infected by the happy figure in the video.

"The happy uncle's action interpreted what life should be," was one comment.

Asked what made the 57-year-old man so happy, Yang said it wasn't because of some good news or winning the lottery, he just always tried to have fun and relax himself after work. Running and jumping around made him feel comfortable.

Yang thinks the most important thing for people is to be happy. When he feels tired, he sings folk songs to change his mood.

To earn more money from work, Yang only goes home once a month. But he doesn't feel bitter as he believes his efforts will make the lives of his family better and better.

"No matter how toilsome or tired, stay happy," Yang says.