Every contemporary Chinese artist comes face-to-face with the dilemma of having to balance between tradition and modernity.

Tradition represents the past, but sometimes it is also an identity intrinsic to the artist. However, most of the contemporary art forms, their techniques and theories come from the West, which are based on a mindset that varies greatly with local experiences.

Shanghai Daily visited three ongoing exhibitions in Hangzhou where artists and designers came up with some answers. 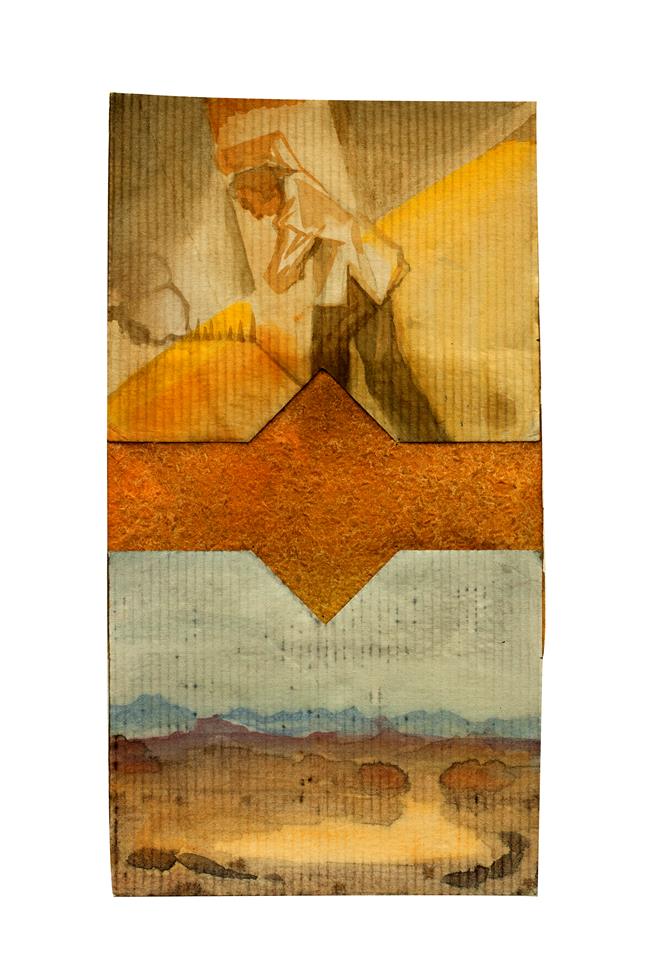 Jing Shijian made a name for himself with the "poppy flower" series and his allegorical landscape paintings of West Lake. In his latest exhibition "1/2" at Renke Art Gallery, he seems to have found a way to disrupt his past experiences.

"The exhibition marks a subversive change in my career," Jing said. "It is of great importance to me."

The subversion is reflected in the media he uses.

In the "garden scenery" series, two pieces of paintings are placed one above another, correlated loosely in their color or subject. They are actually done on cardboards that are used to protect the picture frame corners and are usually disposed off.

These paintings are only a fraction in size of the pieces Jing worked on previously. The traditional way of narration on one single canvas is torn apart mercilessly. Each cardboard piece acts like a close-up shot of a complete storytelling. Most viewers struggle to even make an interpretation.

In a sketching entitled "Woods path," the artist illustrates exactly how he works. The bigger piece on the top depicts a man carrying a log on his shoulder. The one below presents "the bigger picture" that suggests that the story was taking place in a wood.

The artist actually made dozens of such painting cardboards. The exhibition only displays a small portion. In another work, several triangle- and diamond-shaped cardboard pieces are assembled in its own way to form a new narrative.

In a contemporary sense, painting has become a seemingly "weak" art form. Jing has spent 10 years experimenting on a new "painting" language. 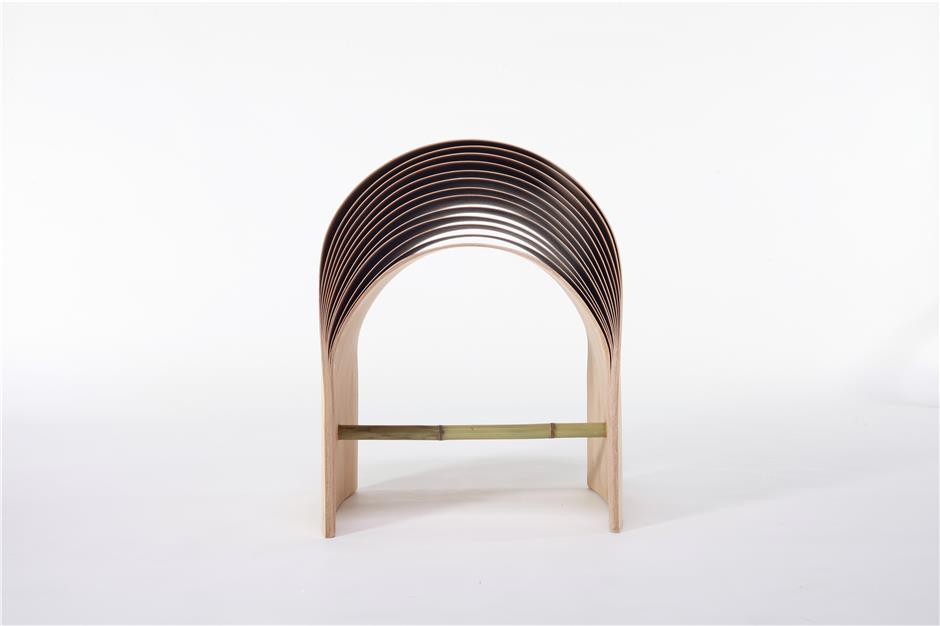 On October 13, a contemporary design exhibition incorporating traditional craftsmanship opened in Hangzhou. Prior to that it had toured Milan, Paris and Lugano in Switzerland.

The project was initiated by curator and designer Zhang Lei in an effort to transform traditional materials with modern designs. The character "rong" (融) in Chinese means to melt, to merge or to integrate.

In 2011, Zhang and his team had a chance to work with local craftsmen of oil-paper umbrella in Yuhang District.

After that he decided to expand it into a five-year project and focus on one type of handicraft material each year.

The project has invited 50 independent designers to work on materials like bamboo, silk, earth, copper and paper for producing their own design works. The final 70 pieces presented in the exhibition range from clothing, food, housewares to accessories and funeral urns. A lot of the works drew inspiration from traditional handicraft techniques.

The entrance of the exhibition is furnished with a passage of 15 large pieces of handmade papercut curtains. The designer takes the motif from the canal scenes in Hangzhou and Milan.

A gigantic Yuhang oil-paper umbrella acts as an outdoor sunshade, allowing people to sit down and take rest under it. A stool named "Hangzhou" is made of bamboo veneers, which takes advantage of the flexibility of the material.

Other impressive items include a chair made of paper and bamboo strips, following the traditional craft of Chinese lantern making; a lamp made of mulberry silk and beech wood with appearances similar to that of the silk cocoon; tableware that take the form of paper but is actually made of paper-fiber added porcelain.

"We hope that we will have another five years and the project will carry on," said Zhang in his welcome address at the opening.

A design library was founded in 2015 in Yuhang to accommodate the design pieces and explore the Chinese handicrafts.

Zeng Han is a photographer and curator based in Guangzhou, Guangdong Province. Prior to that, he worked in the media for 10 years. It is his first solo exhibition in Hangzhou.

The exhibition "Shanshui Strategy" is taken from a Northern Song Dynasty (960-1127) treatise on Chinese landscape painting. It covers 21 pieces of work produced between 2004 and 2017.

Shanshui (mountains and water) is an important category in traditional Chinese painting that is usually reflected in natural landscape. Unlike Western realist style which emphasizes on dimensions and proportions, Chinese literati paint the mountains, rivers and waterfalls to contemplate on their own conditions.

Since 2005, Zeng started to apply the methodology in Chinese shanshui paintings in his own productions. The resulting works are included in the two series in the exhibition entitled "Cool shanshui" and "Real shanshui."

The artist turned his camera to the landscapes that have been changed by human activities or natural disasters, from the monstrous migration monument in Three Gorges, the algae plagued Dianhu Lake in Kunming, Yunnan Province, to the barren mountains in Wenchuan, Sichuan Province, after the 2008 earthquake.

In a recent work, he managed a panorama view on the summer and winter scenes of Huabuzhu Hill in Jinan, Shandong Province. The work is actually influenced by a shanshui painting by Zhao Mengfu, a master of Chinese calligraphy and painting during the Yuan Dynasty (1271-1368).

A replica of the painting is displayed below Zeng's photographic work as a reference. In contrast, the waters and woods that used to surround the hill are replaced by buildings and construction waste.

But in the artist's own words, the aim of these works is not to make any critical statement.

"I think Zeng wants to arouse our feelings toward real nature through his landscape series," said Yang Zhenyu, a professor and art critic.

Date: Through November 10, closed on Mondays