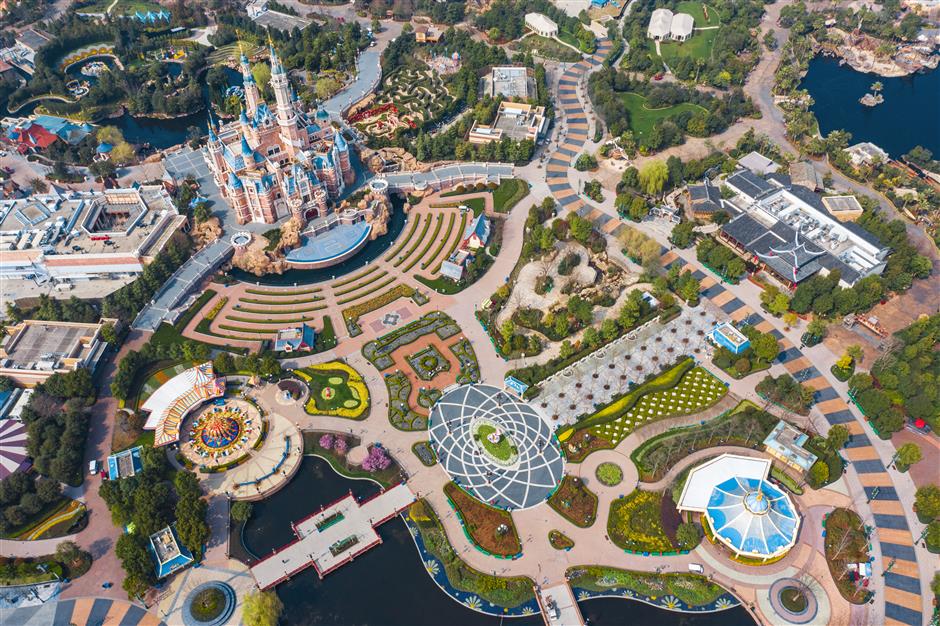 An aerial view of Shanghai Disney Resort on March 10, 2020, when it was closed due to the COVID-19 pandemic.

The Walt Disney Company said on Tuesday that COVID-19's estimated impact on the US entertainment giant's income from continuing operations before income taxes was as much as US1.4 billion during the second quarter for fiscal 2020.

It is the company's first earnings report since the outbreak of COVID-19. Earnings for the quarter, ended March 28, 2020, decreased 63 percent to US$60 cents from US$1.61 in the prior-year quarter. Although the quarterly revenue grew 21 percent to US$18.01 billion, the profit dropped 91 percent to US$475 million.

"The impact of COVID-19 and measures to prevent its spread are affecting our segments in a number of ways, most significantly at Parks, Experiences and Products where we have closed our theme parks and retail stores, suspended cruise ship sailings and guided tours and experienced supply chain disruptions," said Disney in a release.

Disney said that its Parks, Experiences and Products revenues for the quarter decreased 10 percent to US$5.5 billion and segment operating income decreased 58 percent to US$639 million.

The company estimated that the COVID-19 impact on operating income at its Parks, Experiences and Products segment was approximately US$1 billion primarily due to revenue lost as a result of the closures.

As a result of COVID-19, Disney closed its North American parks and resorts, cruise line business and Disneyland Paris in mid-March, while the company's Asia parks and resorts were closed earlier in the quarter.

Disney's theme parks in China, including Shanghai Disneyland and Hong Kong Disneyland, have been closed since January amid threat of COVID-19 spread. Disney said during an earnings conference call on Tuesday that the company plans to reopen its Shanghai theme park on May 11.

"In addition, we have delayed, or in some cases, shortened or cancelled theatrical releases and suspended stage play performances at Studio Entertainment and have seen advertising sales impacts at Media Networks and Direct-to-Consumer & International. We have experienced disruptions in the production and availability of content, including the cancellation or deferral of certain sports events and suspension of production of most film and television content," the company said in the release.

Studio Entertainment revenues of Disney for the quarter increased 18 percent to US$2.5 billion and segment operating income decreased 8 percent to US$466 million.

Disney noted that theatrical distribution in the quarter was negatively impacted by COVID-19 as theaters closed domestically beginning in mid-March and internationally at various times beginning late January.

"While the COVID-19 pandemic has had an appreciable financial impact on a number of our businesses, we are confident in our ability to withstand this disruption and emerge from it in a strong position," said Bob Chapek, Chief Executive Officer of the Walt Disney Company, in the release.

"Disney has repeatedly shown that it is exceptionally resilient, bolstered by the quality of our storytelling and the strong affinity consumers have for our brands, which is evident in the extraordinary response to Disney+ since its launch last November," he noted.