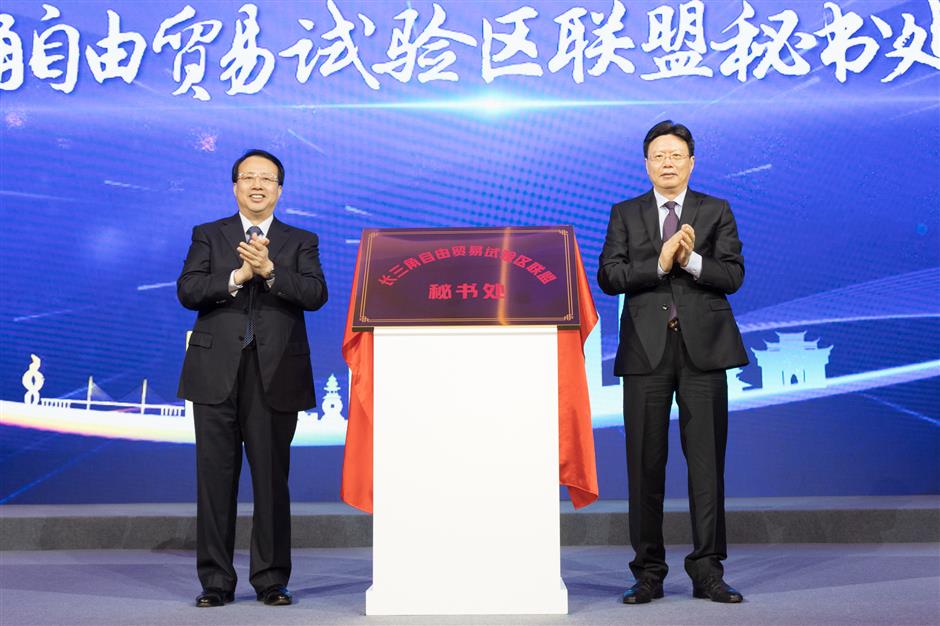 Shanghai Mayor Gong Zheng (left) witnesses the establishment of the Yangtze River Delta FTA alliance along with Yu Jianhua, a senior official with the China Ministry of Commerce, in Shanghai on Monday.

In the next stage, guided by market demand, the alliance will base itself on the existing functional platform resources such as the capital market service base of the Yangtze River Delta, the “single window” of international trade in the Yangtze River Delta, and the professional trade service platform of the Shanghai free trade zone, so as to strengthen and optimize the service functions of trade facilitation, investment facilitation and financial innovation, and work together to promote a higher level of institutional innovation, the statement said.

It pointed out further deepening of the linked development of the four pilot free trade zones through higher quality innovation and development and creating a better business environment.

Zhao Yugang, director of the comprehensive reform department of Shanghai Development and Reform Commission (Construction Promotion Department of Free Trade Zone), said the pilot free trade zones in the Yangtze River Delta involved 11 cities, accounting for about a 500th and a quarter of the total area of the Yangtze River Delta and the total number of cities involved, respectively.

“It is the most concentrated area of the Yangtze River Delta's opening and innovation functions, providing an important driving force for regional economic development,” Zhao said.

Cui Jian, deputy director of the Jiangsu Free Trade Office, said: “We will promote the integration of Suzhou into he Shanghai metropolitan area and actively participate in the construction of the Hongqiao International Open Hub.

“Secondly, at the industrial level, focus on the industries with common advantages, such as integrated circuits, biomedicine and artificial intelligence in the Yangtze River Delta, promote the co-construction and sharing of innovation platforms, the exchange and sharing of innovation elements and resources, and the collaborative tackling of key technologies, so as to be a good pioneer of science and technology and industrial innovation.

“Thirdly, at the enterprise level, we should continue to deepen the reform of decentralization, management and service, improve the level of government services, promote the all-in-one platform in the Yangtze River Delta, and create a fair, transparent, rule of law, safe and convenient development environment for enterprises.”