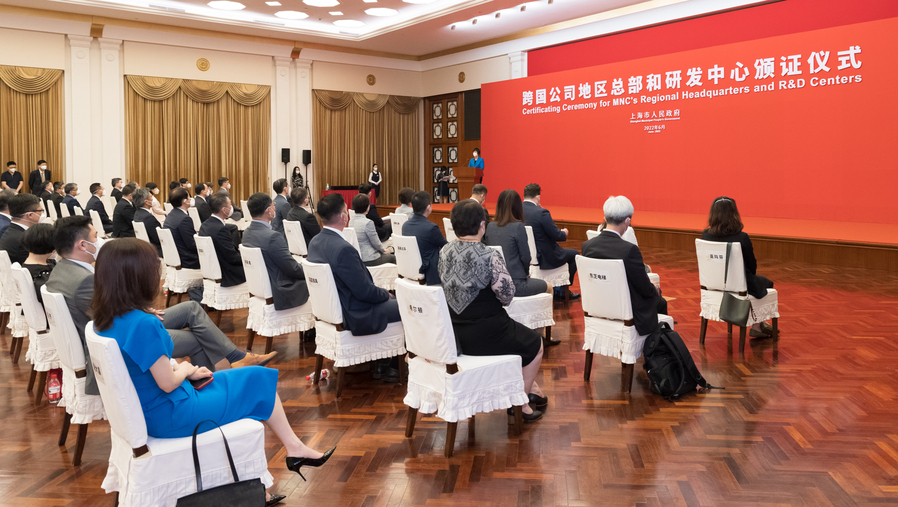 A new batch of 30 regional headquarters and 10 R&D centers operated by multinational corporations were awarded official certificates in Shanghai on Wednesday.

Most of the businesses are involved in the key industry sectors. There are five biomedical enterprises, 10 intelligent manufacturing firms, three automotive companies, eight commercial and retail enterprises, and seven high-end service companies.

Of the awarded enterprises, 57.5 percent are in manufacturing and 42.5 percent in the services sector.

By the end of May, there were 848 regional HQs and 512 R&D centers operated by multinational enterprises in Shanghai, showing the city continued to be one of the hottest investment destinations in China.

DSV Air & Sea Co, one of the world's largest transport and logistics companies, first registered as a company in Shanghai in 2001. It eventually became DSV's China headquarters and has now become its Asia-Pacific headquarters.

"Although some of our business has moved to Southeast Asia, we are still convinced that more opportunities from high-end industries will remain in the the Chinese market, especially in Shanghai," said Cao Binhui, executive vice president of DSV China. "That is why we chose Shanghai as the location of our APAC headquarters," he added.

The Belt and Road Initiative also gave impetus to the expansion of our logistics chain, where we see more market opportunities, Cao said.

DSV is bullish about the prospects of China's domestic logistics market, and is planning to establish a new warehousing and logistics company, with an investment of approximately 300 million yuan (US$44.8 million).

German automotive parts maker Huf Group, which is a supplier to many major automobile enterprises such as SAIC Volkswagen, SAIC-General Motor, Tesla and Honda, also set up its regional headquarters in Shanghai.

The booming automobile industry in Shanghai, led by auto giants such as Tesla, has presented the company with great opportunities, said Thomas Bunke, president of Huf China and managing director of Shanghai.

Siemens was one of the first group of companies permitted to resume production after the easing of Shanghai's recent citywide lockdown. It recovered to its full capacity as early as the start of May.

Its cumulative shipments amount to about 40,000 units, of which more than 70 percent were sold to more than 150 overseas countries and regions.

Siemens has so far developed and manufactured more than 60 products, with an over-80-percent localized supply chain, and had granted more than 730 patents as of May.